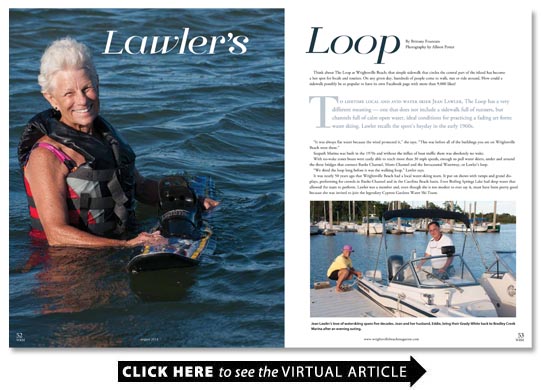 Think about The Loop at Wrightsville Beach; that simple sidewalk that circles the central part of the island has become a hot spot for locals and tourists. On any given day hundreds of people come to walk run or ride around. How could a sidewalk possibly be so popular to have its own Facebook page with more than 9 000 likes?

To lifetime local and avid water skier Jean Lawler The Loop has a very different meaning  — one that does not include a sidewalk full of runners but channels full of calm open water ideal conditions for practicing a fading art form: water skiing. Lawler recalls the sport s heyday in the early 1960s.

It was always flat water because the wind protected it  she says.  This was before all of the buildings you see on Wrightsville Beach were there.

Seapath Marina was built in the 1970s and without the influx of boat traffic there was absolutely no wake.

With no-wake zones boats were easily able to reach more than 30 mph speeds enough to pull water skiers under and around the three bridges that connect Banks Channel Motts Channel and the Intracoastal Waterway or Lawler s loop.

We skied the loop long before it was the walking loop  Lawler says.

It was nearly 50 years ago that Wrightsville Beach had a local water-skiing team. It put on shows with ramps and grand displays performing for crowds in Banks Channel and in the Carolina Beach basin. Even Boiling Springs Lake had deep water that allowed the team to perform. Lawler was a member and even though she is too modest to ever say it must have been pretty good because she was invited to join the legendary Cypress Gardens Water Ski Team.

When Cypress Gardens invited me to be a part of their team down in Florida my parents were terribly against me joining  Lawler says.  It would mean me living in Florida working two shows a day only off in January and February; and to my parents it was like I was off to join the circus!  She laughs and continues  That was in the early  60s when girls lived at home until they got married and my mother being a schoolteacher thought education was the most important thing. So I stayed. At the time I thought it was terrible but it ended up being a really good thing because I would have never met my husband had I pursued that.

At age 23 Lawler went on her first date with her future husband Eddie and six months later the two were married.

Our first date was on the Fourth of July. We went sailing and we were married in February  she says.

It was an easy decision to marry when Eddie Lawler affirmatively answered her two most important questions: Do you love the beach? Do you want to stay in Wilmington?

Those two questions have truly laid the foundation for the Lawlers  marriage.

They can still be found whipping through the waters at Wrightsville Beach on late summer afternoons. After the crowds have retreated from their day of boating through the Intracoastal Waterway and Banks Channel when the water is calm Jean Lawler takes her shore-start with Eddie at the helm.

She laughs and says  I always do a shore-start; just start on the shore and jump off that way I won t have to get wet. The only time you get wet is when the water sprays you.

First-time skiers have not earned this showman s start. Lawler explains  those just learning to ski start in deep water to get up and going  — safety first. She continues to pass on her knowledge and love of the sport to her grandchildren and her friends  grandchildren.

I can t imagine over the years how many people have been pulled behind my boat  Lawler says.  I feel like [water skiing] is something everyone should try and once they try it they always love it.

It is a love that spans generations a treasured past still relished today. It defines Jean Lawler as much as her devotion to community. The Seahawk Club The Hanover Seaside Club (for which Eddie Lawler serves as the 2014 president) and the North Carolina Azalea Festival are a few of the organizations the Lawlers consistently serve. One of their longest volunteer stints is with the Azalea Festival; Eddie has volunteered for 48 years and Jean has volunteered for 54. She is in line to be the 2017 North Carolina Azalea Festival president.

Lawler puts it simply  It s all about the people. Wilmington has great people. And when you love something you find the time.