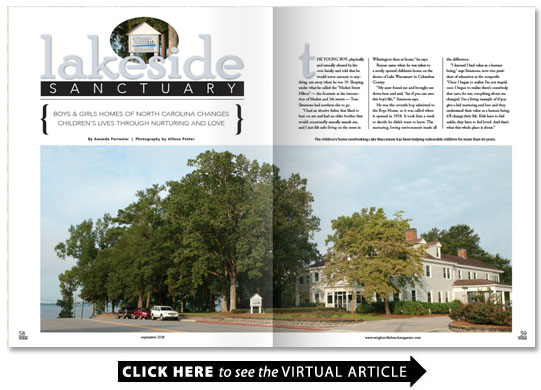 The young boy physically and sexually abused by his own family and told that he would never amount to anything ran away when he was 10. Sleeping under what he called the “Market Street Hilton” — the fountain at the intersection of Market and 5th streets — Tom Simmons had nowhere else to go.

“I had an abusive father that liked to beat on me and had an older brother that would occasionally sexually assault me and I just felt safer living on the street in Wilmington than at home ” he says.

Rescue came when he was taken to a newly opened children’s home on the shores of Lake Waccamaw in Columbus County.

“My aunt found me and brought me down here and said ‘See if you can save this boy’s life ‘” Simmons says.

He was the seventh boy admitted to the Boys Home as it was called when it opened in 1954. It took him a week to decide he didn’t want to leave. The nurturing loving environment made all the difference.

“I learned I had value as a human being ” says Simmons now vice president of education at the nonprofit. “Once I began to realize I’m not stupid once I began to realize there’s somebody that cares for me everything about me changed. I’m a living example of if you give a kid nurturing and love and they understand their value as a human being it’ll change their life. Kids have to feel stable they have to feel loved. And that’s what this whole place is about.”

Nearly 65 years after its founding the organization now known as the Boys and Girls Homes of North Carolina is still saving the lives of vulnerable children by serving as a sanctuary a place of refuge and rescue.

“We do this for the love of kids ” says Gary Faircloth president and CEO and a resident from 1964-66. “We believe in the inherent goodness of every child. They can do great things.”

These are kids from the worst imaginable circumstances. Most have been through multiple foster homes.

“They are referred by DSS (the Department of Social Services) because of severe abuse and neglect ” Faircloth says. “Typically our children have been through 10-15 sometimes 20-25 placements that revolving door before they come here. So there’s a lot of abuse history there.”

A 10-question quiz called the Adverse Childhood Experiences test measures exposure to abuse neglect and dysfunction in the home including substance abuse mental illness and parental separation. A score of 4 means a child is more likely to engage in dangerous behaviors drop out of school and will be prone to future behavioral and health risks as an adult. The average score of residents at the Boys and Girls Homes is 6.7.

It was the Christmas season in 1953 when Whiteville funeral home director A.D. Peacock was notified that a woman had died. He went to the rundown house in the poor part of town and was shocked by what he found.

“No one was at home except seven cold hungry children — all between 4 and 12 years old — and their mother lying in a casket ” he later wrote. “In order to keep warm the seven children had gone to bed their only cover being ragged quilts and burlap bags. They had gone to bed hungry for there was no food in the house. In the small shabby living room I noticed a small tin heater but no wood to start a fire. The father? Perhaps he would show up later. Perhaps not.”

Peacock was determined to do something.

He presented the idea of a home to help children in similar circumstances to his civic club. The story greatly touched the hearts of the members. A collection taken that night raised $176 the seed money that grew into the $40 000 that was used to purchase the land and construct the home.

It’s since grown to a 140-acre campus that includes housing for boys and girls including two residences for teen mothers a working farm a chapel and Thomas Academy a public charter school for grades 6-12.

Thomas Academy in its fifth year is open to both residents and the community. The curriculum is specialized to meet the needs of students who have not found success in a traditional public school setting. The main goal is for each child to find and develop connection compassion and character.

The school has a 100 percent graduation rate including the 18 students in the class of 2018.

“A few years ago graduating from high school was not in their future ” Simmons says.

Simmons went on to get a bachelor’s master’s and doctorate after leaving Lake Waccamaw and worked in the public school system as a teacher principal and superintendent. He came out of retirement to become the vice president of education for Boys and Girls Homes of North Carolina.

“Gary called me in one day and said “I’d like you to be the vice president of education” and I thought ‘Wow here’s a chance to come home.’ It just fell in my lap ” Simmons says. “I signed a three-year contract five years ago. I don’t know where that contract is now. It is being home and that’s why it’s so special because I know what it did for me I know what we’re doing for kids that come here.”

That’s a common theme. Many staff members are alumni. The lakeside sanctuary was their home and they returned to give back to a place that saved them from an uncertain and unpromising future.

Jasmine Patrick arrived when she was 14. She had a disabled mother who couldn’t stop her from hanging out with the wrong crowd.

“The trouble that I got into was probably the best thing that could have ever happened to me because it led me here ” Patrick says. “As I look back at it now it was a blessing in disguise. Knowing the support that I had when I was here now being able to be that person for somebody else means the world to me. You don’t give up on a child and they remember that.”

Patrick heads up the foster care services working with DSS the Guardian ad Litem program judges and attorneys to place children in homes that fit their needs and the capabilities of the foster parents. She also supervises the foster parents and the foster child after placement and acts as a support system to all parties.

“We go out there twice a month and we have weekly contact. Sometimes more than weekly contact depending on what’s going on ” Patrick says “We’re very active with our foster children. We go to their court dates and attend meetings. We’re their advocates.”

Ian Callahan director of transitional living services is yet another alumnus. He spent seven years here from age 11 to 18 after being abandoned by his father.

“My stepmother gave my dad an ultimatum. It was either her or me ” Callahan says “As funny as it’ll sound to say this it was the best gift he ever gave me. I’d probably be on welfare living out of some trailer maybe working some odd jobs somewhere if I hadn’t been at this place. They taught me to follow the rules taught me structure and discipline. Without this place I probably wouldn’t be anywhere good.”

Callahan’s job is to ensure the residents are prepared for college or the work world.

For most incoming children the first step is learning to manage their behavior through a program called GRACE.

“GRACE stands for ‘growth restoration and cultivating empowerment ‘” Callahan says. “The four levels are safety and belonging growth and wellness confidence and then future and generosity. It is a skill-based behavior management program. It teaches the kids social skills that they lack in coming here.”

Most residents in the transitional living program are juniors and seniors in high school though some are attending college. They learn how to trust others and be trusted in return. Many hold part-time jobs in the community. Others have jobs on campus learning valuable skills by working in the auto or woodshop maintaining the grounds or doing clerical tasks.

“Our goal is to get 100 percent of them working in the community because we want to give them a more normal experience as far as learning job skills and social skills ” Callahan says. “It’s more about them learning job skills than about them earning money but they’re able to purchase things and have phones. They learn the value of money and learn the value of work experience.”

Faircloth came to the Boys Home as a 15-year-old experiencing domestic turmoil.

“If this place didn’t exist I don’t know where I’d be today ” he says.

He was passionate about the organization that had saved his life and returned after college in 1972 to take on a number of roles including director of social services educational coordinator associate campus director civic club coordinator director of planned giving and director of development.

Faircloth moved to Michigan in 1988 to serve as vice president of a similar organization but came home 10 years later to become the president and CEO. His unofficial duties include serving as a role model.

“He’s been there and done that ” says Doreen Williams director of the houses for teen mothers. “We can look at him and we can tell the kids if he’s successful they can do it too.”

Williams is not a former resident but typifies the caring staff some of whom have been at Lake Waccamaw for more than three decades.

“It’s a calling. It’s not just work ” Williams says. “Charles Stanley wrote a book called ‘The Glorious Journey.’ He said when you find your niche it’s no longer a job it’s what you love to do. For me it’s what I love to do. It’s not just getting up in the morning and coming to a job. It’s always something new. We’re always looking for new ways to evolve.”

The housing for teen moms opened five years ago. The babies either stay on campus or are in day care while their mothers attend school or work.

One current resident graduated from Thomas Academy in 2017 became a certified nursing assistant and is going to college to become a registered nurse.

“With being in college and having homework being able to stay here really helps ” she says. “They provide transportation. They are active in my school life. If I need something they make sure I get it. It’s really nice to have someone that supports you.”

Williams loves to hear those stories.

“It’s breaking the cycle ” she says. “It’s teaching these young ladies to take the next journey of their life that they can be successful in life.”

That sums up the mission of Boys and Girls Homes. The organization provides a safe and nurturing environment that takes children from hopeless situations and gives them hope for the future.

“I share with the kids a reggae song: ‘The caterpillar sheds his skin to find a butterfly within.’ And I think that’s perfect because we get all these caterpillars that come to us and over a period of time begin to shed that outer skin and they begin to find their butterfly ” Simmons says. “It really is amazing to watch it happen.”