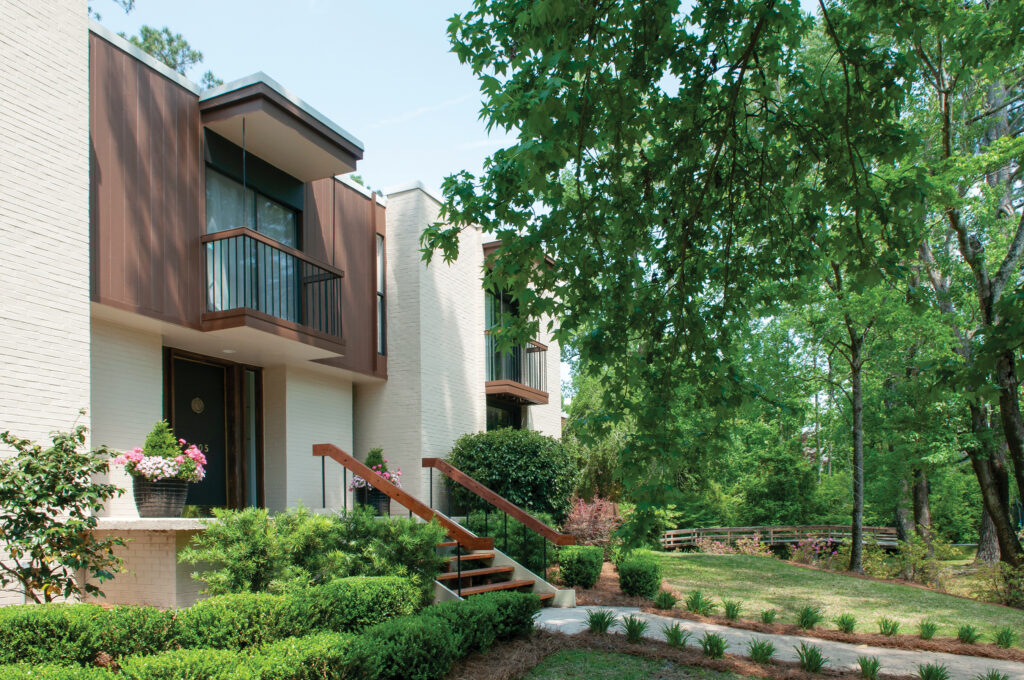 The house that Charlie and Betty Boney built for their family of five evolved into a family of six. Now the home of their fourth child, Chris Boney, his wife Sutton and their three children, the bone structure has been preserved and reinterpreted for a third generation. Photo by Allison Potter

“It has always been a little house at the end of an unpaved road in the woods,” Chris Boney says, “and it still is.”

His wife, Sutton Boney, laughs about her vision for their new home. “I had no vision at all,” she admits. “Chris drew a picture of how it might look, and I said, ‘OK. I am happy.’”

Their interior designer, Sissy Schoettelkotte of My Blue Hydrangea, was happy too. Sissy styled the architect and his wife’s former home — a painted brick Colonial on Forest Hills Drive — and helped Sutton’s parents downsize. “They liked what I did in the old house,” she says.

The bedrock of the new project, Schoettelkotte says, was two-fold: first and foremost to honor the integrity of the home’s original late Mid-Century modernist architecture, and second to create spaces that resonate with how families live today.

“Being an architect, you have a lot of strong opinions,” Schoettelkotte says. “They’re a young fun couple and this is one of my favorite projects ever.”

Designed by the late, great modernist architect of record, Charles “Charlie” Boney, for his wife Betty and their then three children — Charles Jr., Beth and Suzanne — the three-bedroom home was completed in 1967. Chris was born in 1971.

“Igrew up in this house. My children have grown up in this house,” Chris says, “Every house evolves and grows and changes.” With the compassion to add to it, and build upon it, he says, “We’re thrilled to be the caretakers of it.”

“His dad built a great house that has stood the test of time,” Sutton says. “I don’t think there was ever a doubt in Chris’s mind that we would end up here.”

They began the renovation process with Gwathmey Residential Group in 2015.

A rear terrace that overlooked Cape Fear Country Club’s 13th tee was enclosed with glass walls. Chris Boney, who followed in his father’s footsteps, designed a horizontal roofline extension to create a sense of enclosure within the indoor/outdoor room, which is perfect for nature viewing. Golden and redtail hawks compete with barred and great horned owls for squirrels beneath a storied live oak tree.

“I never realized the diversity of wildlife,” Chris says. “The birds and wildlife really become our TV show.”

A reconfigured open kitchen and family room unfolds beyond the glazing. With so much glass, some days the Boneys feel like they live in a fishbowl.

Passing golfers notwithstanding, most family members, friends and guests are invited through the front door, entering a sunken foyer where a circa 1966 Platner steel and glass circular table grounds the space anchored by classic black leather and steel Wassily armchairs designed by Marcel Breuer.

An open circular stair leads to the upper story, while a three-stage rise provides a dramatic entrance into the grand living room that occupies the same axis as the renovated family room. Sixteen-foot ceilings tower above the space furnished in reupholstered family pieces. Removing privacy drapes and wall-to-wall carpet to lay hardwood floors were tough decisions, Sutton says.

The choices were made in consultation with Schoettelkotte. “Sissy says, ‘I think you want this,’” Sutton says. “She knows me well enough to know where I’m going.”

Together they arrived at a palette for the living room that bows to the era in which the house was built, but they flipped the color pops from burnt orange to aqua on the vintage Knoll Platner armchairs. Adding dashes of chartreuse brings the tender green of leafing deciduous trees from the outdoors in. When the azaleas bloom, the landscape is awash in vivid lavender, magenta and white petals. Come summer the blue hydrangeas reign.

A large oval table commissioned by Betty Boney is central to the formal dining room. Blue walls are echoed in a tone-on-tone blue flame stitch fabric also used to cover Lucite chair seats. The wooden chairs were Sutton’s grandmother’s. The host and hostess wingbacks, authentic to the Boney family, were repurposed in a graphic navy and white textile. A distressed wood china and curio cabinet, built by Sutton’s father, is filled with an eclectic collection of serving dishes.

“There is one silver ice bucket that was awarded to Charlie. Most of the rest just flowed to me from Chris’s mom and mine,” Sutton says.

Two curved columns were designed to disguise double hot water heaters. Sutton says Charlie never wanted his girls, who had long beautiful hair, to run out of hot water when they showered. One curved column has now been retrofit as a downstairs powder room.

Up the open circular staircase to the second-floor bedroom wing, Chris and Sutton expanded their master bath by remodeling what was originally Betty Boney’s dressing room. Each of her children had their own rooms when baby Chris was born. Charles Jr. had an adjoining bath, albeit small, now daughter May’s. The Boney sisters shared a Jack-and-Jill bathroom, now shared by sons Lawrence and Henry.

When move-in day arrived in 2016, Schoettelkotte thought it was marvelous to see Charles Jr., also an architect, installing towel bars in the master bath.

“Charles also built my closet organizers,” Sutton says. “That’s not unusual. When we bought our first house on Oleander, we went out of town and Charlie and Charles came over and painted our laundry room. It’s all for one, one for all around here.”