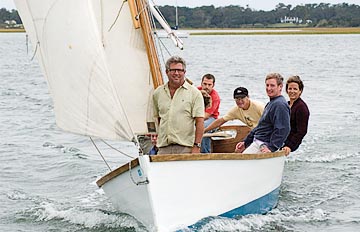 A well-crafted sailboat is as pretty as a painting

as thoughtful as an intricate set of blueprints. Its form must reflect its function. Will it be used for fun or fishing? Racing or cruising? Paired with excellent craftsmanship a strong design concept can mean a long life span. But what happens when nature interferes when one of these beautiful boats gets swept up in a storm damaged beyond use and then forgotten? The answer is simple: It takes a special crew to step up and bring her back to life.

Wrightsville Beach resident Bryan Humphrey found himself in this very position last December. He was restoring a Simmons Sea Skiff a personal arts and crafts project to feed his passion for architecture design and boats and good friend and local artist Andy Cobb was keeping tabs on the project. When Humphrey was finished restoring Cobb had a proposition for him.

He told Humphrey the story of Neusom Holmes a river guide in the 1970s who planned to build three spritsail skiffs to carry tourists up and down Pamlico Sound and the Outer Banks.

He had the first one built but the project never came to fruition. After sailing it and then leaving it in a barn in Raleigh he gave it to Wrightsville Beach resident Andy Cobb. Cobb sailed it in the 1980s then gave it back when he moved off the beach. Neusom kept the boat at Topsail until it was damaged in a storm.

When Cobb realized his friend had a knack for boat restoration and the credentials to back up his work a career as an architect and custom furniture designer he suggested to Holmes that Humphrey might be interested in working on his damaged spritsail skiff.

It was an offer Humphrey couldnt refuse. When he and his friends first saw the boat at Topsail Beach it was dead in the water in terrible condition barely afloat with a plywood patch along its port side. But through the crumpled damage Humphrey says he saw a “beautiful piece of original boat construction.”

“Itd be a shame to let it go ” Humphrey thought. But what really possessed him to undertake the arduous task of repairing a damaged skiff so soon after hed just completed major restorations on another boat was the enthusiasm of his friends who reminded him more than once that he would regret passing up the opportunity to work with such a unique and beautiful craft. That and what the spritsail skiff itself stood for: a different era of boat making. To Humphrey it was a piece of art that he couldnt abandon. Arm in arm with his friends he accepted the challenge.

Several weeks later when they returned to Topsail to haul the 24-foot boat home the men were disheartened at what they found. The boat had completely sunk in the shallow water. They were able to pull it part way onto a trailer and pump it out and then they hauled it back to the workshop of their friend Walt Cartier. The location was dubbed renovation headquarters and there was no turning back.

At least 40 percent of the port side was damaged creating the appearance of a skeleton rather than a floating craft. The crew decided that the boat needed new wooden frames and lots of repairs to its old copper bottom. Humphrey and his friends also built a bamboo topmast because the original one was gone. With so much to do these intensive repairs didnt come without some sacrifice on the part of the repair team.

Until the spritsail skiff came into the picture Wednesday night had been “Boys Night Out.” A long-standing social tradition for the group Wednesdays served as a break in the middle of the long work week. Theyd gather on sailboats at Wrightsville Beach to socialize catch up and relax. But now the men had something else to consider when planning their weeks. The spritsail needed immediate attention. For Humphrey and 10 or so of his friends weekly sailboat gatherings were replaced with Wednesday night boat work gatherings.

The weekly meetings took place from early January until mid April. As the project continued more and more people started showing up at the workshop. Humphrey says that over the course of those few months at least 40 people came by to lend a helping hand. The men worked quickly and because everyone had a common goal the process felt fluid even fun. The boat began to look almost normal again and the men found that their camaraderie was just as strong in the workshop as it was on Wednesdays at the beach.

They christened their skiff Komradeship. Before long the men were putting a fresh coat of paint on her. Theyd done all the refurbishing they could do. The only thing left was to find out if their work would pay off. Would the Komradeship sail?

They took the boat to Banks Channel in Wrightsville Beach hoping the boat wouldnt go to the bottom again. The Komradeship took to the water beautifully. “It was surprising how well she sailed ” Humphrey says.

Proud of their success and eager to show off the Komradeship at its birthplace Beaufort North Carolina Humphrey and his friends entered their skiff in the N.C. Maritime Museums Annual Wooden Boat Show on May 2. Proving that it could fare in unfamiliar waters and impressing the judges the Komradeship took prizes in various races. A happy ending right? Not exactly.

When the boat was brought back to Wrightsville Beach Humphrey admits that “we sailed it hard.” They used the Komradeship three days a week for six weeks a choice that proved to be too much pressure for the skiff. Before long the minor leaks and “uh-ohs” that commonly plague older craft were occurring at an increasing rate. The Komradeship cried out for a second round of repairs. Again Humphrey and his band of brothers answered the call.

The second refurbishment consisted of replacing the boats bottom the minor repairs to it the first time hadnt sufficed. Wednesday night meetings were reinstated. This round of changes provided the challenge of implementing modern techniques for improvement without compromising the integrity of the boats initial design. And for the men of Wrightsville Beach it was an opportunity to get to know each other in new ways as artists directors builders and friends. In the end a modern bottom and a fresh coat of blue paint could not hide the rich history and impeccable design of the Komradeship. And the time and energy spent rebuilding the spritsail brought the team even closer together.

The renovations concluded in October and the Komradeship set sail again. The launch was a success but if storm winds ever blow across its bow again theres no question who will step in and make things right.