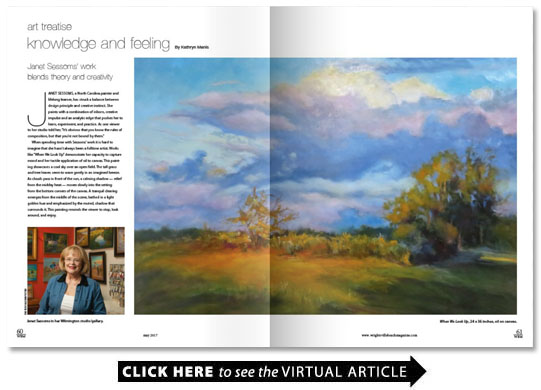 Janet Sessoms a North Carolina painter and lifelong learner has struck a balance between design principle and creative instinct. She paints with a combination of inborn creative impulse and an analytic edge that pushes her to learn experiment and practice. As one viewer to her studio told her “It’s obvious that you know the rules of composition but that you’re not bound by them.”

When spending time with Sessoms’ work it is hard to imagine that she hasn’t always been a fulltime artist. Works like “When We Look Up” demonstrate her capacity to capture mood and her tactile application of oil to canvas. This painting showcases a cool sky over an open field. The tall grass and tree leaves seem to wave gently in an imagined breeze. As clouds pass in front of the sun a calming shadow — relief from the midday heat — moves slowly into the setting from the bottom corners of the canvas. A tranquil clearing emerges from the middle of the scene bathed in a light golden hue and emphasized by the muted shadow that surrounds it. This painting reminds the viewer to stop look around and enjoy.

The rendering feels realistic and yet is obviously full of loosely applied paint and brushstroke. This is achieved through Sessoms’ ability to capture variation in light a skill that enables a scene to be both shockingly three-dimensional and movingly emotive.

While Sessoms worked in watercolor for some time these days she works primarily in oils. This is influenced in part by the travelling she has done with her husband and friends and the powerful reactions she has had to the art she has seen.

In particular she remembers a painting by the Spanish artist Joaqu�n Sorolla called “Sewing the Sails.” Sessoms describes seeing the painting for the first time at a show in Houston Texas.

“I just sat down on the floor in front of it and I could’ve stayed there for hours ” she says. “It was the most amazing thing I’ve ever seen in my life. It’s so big and high. What appeared to be detail from a distance when you got close to it was actually huge brush strokes put down very quickly.”

“Sunrise Pastel” exhibits Sessoms’ connection to this style and ability to incorporate that revelatory experience into her practice. The painting features an improbably blue pleasantly churning ocean scene. The rich swirling water flows smoothly into a pastel colored sky as a shining citrus sunrise breaks up the otherwise cool tones.

The scene of “Sunrise Pastel” makes you wish that you could reach out and touch it and the rhythmic brushstrokes and delicate warm color palette draw you in.

A self-described “curious and analytic thinker ” Sessoms’ oeuvre demonstrates her learned understanding of composition and substantial skill in naturalism and manipulation of paint. “Shore Patrol ” for example reflects an almost photo-realistic painting ability rendering a flock of seagulls on a southeastern North Carolina beach with intricate detail and impressive comprehension of light and movement.

Sessoms’ goal is to channel that ability into more free and loose expression.

“Even though my early work was realistic it isn’t the direction I wish to go or want to be known by ” she says. “People have commented on my detail which takes them to a scene so I’ll be happy with that. But I’ve definitely loosened up over the years. I paint six days a week six to eight hours a day. I’ve taken workshops learned more about edges and color and am working on composition. I deal more in value and contrast now but I want to go so much further. I have this inquiring mind and I just want to keep learning and keep applying it. And I want each painting to have a little something more in it.”

Art has always been a part of Sessoms’ life though not necessarily in the traditional way. Though she took art lessons as a young girl and her beloved maternal grandmother was a painter Sessoms was a home-economics undergrad at Meredith College in Raleigh.

In her 40s and as a mother to three children Sessoms decided to return to school for a second undergraduate degree in education. Much of her coursework introduced her to design and aesthetics and teaching art was a logical next step.

Taking classes at the University of North Carolina Pembroke during the day teaching in the afternoon and completing homework at night Sessoms put in dedicated work hours toward her goal.

“I have a picture in my brain of my two youngest children helping me pull prints in the early hours of the morning and hanging them on a clothesline in my dining room ” she says lovingly recalling the period. “It was crazy. My family was so supportive of me and the children were so sweet. I remember them saying ‘Let’s see your report card Mama.'”

After graduating from Pembroke Sessoms spent 22 years teaching art to students at the middle school and elementary levels including a stint at Wrightsville Beach School. She says that her experience as an educator has been a blessing in many capacities including the opportunity to ensure her students didn’t make the same mistake she did while at Meredith College.

Back then Sessoms felt driven to learn about and make art something she’d been doing since her first instruction in oil painting at 8 years old. But she did not feel that being “taught” art was an option.

“I would go to the door of the art department but I didn’t cross the doorstep because I thought you already had to know ” she explains. “I didn’t think they could teach you. Every year I taught I told my students that they could be taught if they had a desire.”

After retiring from the school system in 2012 Sessoms went from teaching art to creating art. She rented a space at the Art Factory and began to paint.

Sessoms’ artistic journey and painting style recall another artist who she describes as inspirational comforting and a kindred spirit. Much of her early work involved depictions of flowers and vegetation with the sensual and colorful paintings of Georgia O’Keefe in mind.

Because Sessoms embraced the full potential of her art practice after many years of researching artists and art works for her students she doesn’t cite specific artists as influencing or guiding her style. O’Keefe Sessoms explains gave her comfort and confidence and inspired her to push through the uncertainty that gave her pause while in college.

O’Keefe’s writings reveal an artist who questioned herself and her ability early on yet grew into a confident admirable and unapologetic painter. They also depict a woman who found great joy and blessing in her art and life. Though she showed promise from the start O’Keefe chose to teach in public schools and universities for many years before embarking on a career as a painter.

She also famously stated “The men liked to put me down as the best woman painter. I think I’m one of the best painters.”

Finding a kindred spirit in someone whose work she found to be both beautiful and interesting was important for Sessoms.

“I really liked the simplicity of [O’Keefe’s] work and I read a lot about her ” she says. “I enjoyed hearing her thoughts and thinking that I had some of the same thoughts. Reading her letters and seeing her insecurities hearing her question herself was meaningful.”

Like O’Keefe Sessoms enjoys painting natural scenes — water reflections and skies are some of her favorites. Also like O’Keefe whose husband was the famous photographer Alfred Steiglitz she finds value and assistance in photography. Sessoms and her husband are both skilled photographers and their shared interest in image-making and travel feeds her creativity and passion for painting.

Sessoms now is a part of the community of artists who create in Wilmington’s the ArtWorks space. She continues to blend her complementary strengths revel in her passion and love for the painting process and learn as much as possible.

Like O’Keefe and Sorolla Sessoms creates paintings that reveal an intimate and intellectual relationship to painting and the act of production. Each image quietly exudes beauty confidence intelligence and a soothing familiarity that highlights her lifelong commitment to art and to bringing art into the lives of as many people as possible.