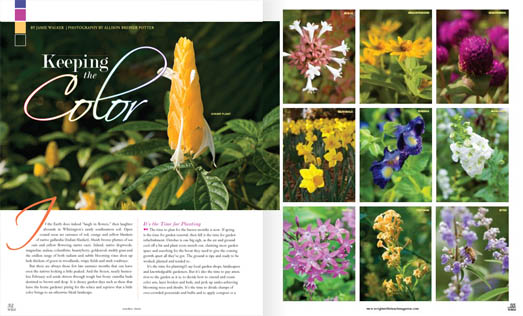 But there are always those few late summer months that can leave even the natives looking a little peaked. And the frozen nearly humorless February soil sends shivers through tough but frosty camellia buds destined to brown and drop. It is dreary garden days such as these that leave the home gardener pining for the solace and reprieve that a little color brings to an otherwise bleak landscape.

Its the Time for Planting

The time to plan for the barren months is now. If spring is the time for garden renewal then fall is the time for garden refurbishment. October is one big sigh as the air and ground cool off a bit and plant roots stretch out claiming more garden space and searching for the boost they need to give the coming growth spurt all theyve got. The ground is ripe and ready to be worked planted and tended to.

Its the time for planting(!) say local garden shops landscapers and knowledgeable gardeners. But its also the time to pay attention to the garden as it is to decide how to extend and create color sets layer borders and beds and perk up under-achieving blooming trees and shrubs. Its the time to divide clumps of over-crowded perennials and bulbs and to apply compost or a favorite time-released fertilizer to perk up flowering trees shrubs and perennial beds.

To the new or otherwise preoccupied gardener this may all seem overwhelming. But in the time it takes to water in freshly planted pots of pansies a mental list of chores can be made (and transferred to paper). Its the planting dividing and transplanting that could (happily) take up a few October Saturdays.

Gardener Tom Ericson co-owner of The Transplanted Garden says that without a good feeding the blooms of even the hardiest flowering plants can either peter out way before their time or give a consistently below average performance. “Were basically growing hydroponically here ” Ericson says. Sandy coastal Carolina soil offers easy digging and excellent drainage but little to no nutritive value so its the gardeners job to compensate.

Ericson suggests using compost and organic time-release fertilizers seasonally for long-term benefit. “Chemical fertilizers wash through the soil so quickly and tend to wipe out beneficial microbes that help build a richer healthier soil ” he says. Hog compost is his compost of choice. He doses his flowering plants and trees with a half inch of it every fall and again in spring.

He also applies super-phosphate to several of his flowering shrubs and trees several times throughout the year. “Feed your crape myrtles instead of pruning them if its bigger blooms youre looking for ” Ericson says. Deadheading crape myrtles in October he adds also stimulate earlier more fantastic blooms.

Ever-clumping seemingly self-sufficient daylilies daffodils and most hardy bulbs are no exception. They all lose their zest over time without a good feeding and the occasional dividing.

Also take the time this month to take inventory. Are some areas over-crowded? As your garden has grown and changed is there anything that needs more or less sun for optimum flower performance?

Over-crowding is easily solved by transplanting and dividing. When you transplant shrubs and divide clumps of bulbs and perennials dont forget to throw in a little compost or fertilizer as youre planting. The reward for dividing is more color longer in the spring and summer. If space is limited offer clumps of perennials and bulbs to friends or neighbors. To a gardener there can be no better gift.

As for the perfect spot some plants are pickier than others. If something has simply gotten shaded out or has become too exposed then move it accordingly. Remember that full-sun plants here in the southeast usually dont mind a little shady down-time.

Keeping everything happy and blooming in the muggy South is unrealistic. There are few plants tough enough to sustain both the late summer heat and the frosty winters while maintaining perfect flowering composure. Though there are Ericson says a few fail-proof gems that give-and-give-and-give that every Wilmington gardener should have.

For the dog days of summer there are few that can beat the heat. The commonly used rudbekia gold strum (black-eyed Susan) butterfly bush daylilies lantana (the list goes on) are all great choices for summer color but Ericson suggests some rarely used specimens that keep the color longer.

Caesalpinia spinosa has bluish mimosa-like airy foliage and big yellow flowers like snapdragons. It can get up to five to six feet tall tolerates drought heat and sandy soil and makes a great background plant for perennials blooming early to late summer. Hamelia patens or fire bush electrifies the late summer garden with orangey-red blooms and makes a nice background for shasta daisies or white annuals. The most tolerant though Ericson says is cestrum with bright golden yellow flowers that cover this six-to-eight-foot tall woody perennial. It blooms from late April to early December. “Mine did everything and asked for nothing ” Ericson says. “All it wants is sun.”

Other under-used winners he says are quaint low-growing rain lilies that need full sun and a nice rain shower to put on a charming show of white pale pink or creamy yellow flowers; the annual shrimp plant that the hummingbirds go wild for from May to October or November; and self-seeding larkspur that shoots up to three to four feet topped with gorgeous flowering heads of blue pink and purple.

Common flowers and flowering shrubs are not always the best choices for every garden. Vitex known as chaste tree or lilac Ericson says stays fuller and is more tolerant than the butterfly bush here in the southeast and is also a favorite of butterflies and honey bees. If it is dead-headed fed and watered regularly it can bloom for three months into late summer. Henry Ilers rudbekia is a cooler lighter yellow than the hot rudbekia goldstrum. It blooms earlier and much taller up to 4 feet and will bloom again if cut back in June. Pruning and dead-heading can ensure longer bloom periods for many perennials and flowering shrubs.

Beautyberry is another native perennial that can give a sunny spot a lot of color. The deep purple berries are popular in cut arrangements. Muhly grass has brilliant pink plumes that grace the late summer garden. They are drought tolerant and need sun.

Native vines such as Carolina Jessamine maypop vine or passion flower trumpet vine and orange honeysuckle (Lonicera ciliosa) are all excellent choices for arbors and fences. All but Carolina Jessamine (an early summer bloomer) offer long-term summer color and are favorites of butterflies and bees.

Varieties of the thin-leaved Camellia sasanqua bloom themselves silly in the fall and into the winter months even when neglected. The glossy later-blooming japonicas do the same. Garden guru Barbara Sullivan author of Garden Perennials of the Coastal South and local garden lecturer says that camellias provide a solid and beautiful backbone to every garden. “If you can have a camellia you should ” Sullivan says. Both she and Ericson recommend using camellias in foundation planting in place of boxwoods or hollies when possible. There are hundreds of varieties of both upright and horizontal camellias with magnificent blooms in different shapes colors and fragrances. They are fantastic low maintenance plants for the inland garden.

Sullivan suggests anchoring the garden with flowering trees that are sure to put on a show. The flowering apricot is the earliest bloomer December/January. The cherry family is next; well-adapted varietals bloom from February to May.

Other great choices for winter color are the low-growing lenten rose with dainty pinkish-white blooms in late winter into spring; variegated Daphne with its fragrant inconspicuous flowers; orangey-red flowering quince which flushes out late winter; early spring blooming forsythia; and the ever-interesting heucheras which have awesome winter foliage and can bloom all summer if planted in the right spot.

October is the time to buy spring-blooming bulbs but they can be planted as late as December. Sullivan suggests going small. Dwarf daffodils can be a better choice than the leggy standards she says. They bloom super-early multiply faster and bloom more consistently. “And you wont have those huge leftover leaves to deal with ” Sullivan says. Star flower bulbs (iepheon) are another of Sullivans favorites. They create a carpet of white or pale blue flowers that combine well with violas and dwarf daffodils. Scillas or wood hyacinths are also great additions to the early spring garden. They multiply well and bring cool blue spring flowers.

Carolyn Thomas owner of Gardens by Design says that keeping the color is a must. “Flowers are a representation of life of all things good ” she says. “Without flowers wed go without a lot of things.”

She is a believer in spots of annual color for everyones sake. Pentas torenia and angelonia are her summer annuals of choice. Butterflies and bees swarm around pentas and hummingbirds go wild for torenia. “If the insects and hummingbirds love it ” Thomas says “plant it.”

On the job in August at the home of Tanya Roberts in Landfall Thomas and her crew worked to keep the color that they so successfully created. Rose of Sharon with bloomed out iris at its foot greeted us covered with bright flowers that didnt seem to mind the scorching heat. The waterside garden was an explosion of perennial color purple salvias light blue agapanthus bright red knockout roses.

It somehow didnt seem like August in Ms. Roberts garden. Even her English rose garden was blooming and ready to bloom some more.

So whats the secret to an ever-blooming garden?

“Planning ” Thomas says. “Lots of planning and a lot of work. But its so worth it.”