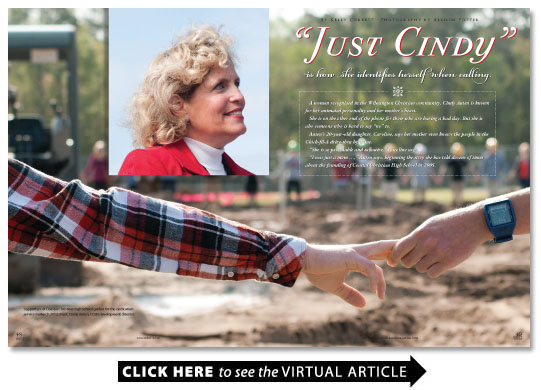 Just Cindy is how she identifies herself when calling.

A woman recognized in the Wilmington Christian community Cindy Auten is known for her animated personality and her mothers heart.

She is on the other end of the phone for those who are having a bad day. But she is also someone who is hard to say no to.

Autens 20-year-old daughter Caroline says her mother even knows the people in the Chick-fil-A drive-thru by name.

She is so personable and talkative Caroline says.

I was just a mom Auten says beginning the story she has told dozens of times about the founding of Coastal Christian High School in 2005.

Caroline was a seventh-grader at Myrtle Grove Christian School and Auten wanted a place where her evolving daughter would receive a well-rounded high school experience with a Christ-centered focus.

For all parents its your last chance to really make a difference before they go off to college Auten says.

Caroline says she was apprehensive about attending Coastal Christian that first year but she looks back now and cannot see her high school experience any other way.

It kind of just helped me dabble in everything she says.

Auten would caravan Caroline and her friends who went to Coastal Christian to school every day.

With a background in marketing Auten says she uses the skills given to her by God to make Coastal Christian a success just like the handful of other founders.

It was like God orchestrated all of us with the gifts that he gave us to start a school for His kingdom the 51-year-old says. And he does that always.

Morris Jackson Permenter is the original visionary for the school. Then Auten Pastor Kelly Stanley and three other women combined their talents to start the school seven years ago.

I still think were the best kept secret in Wilmington Auten says as she continues to explain in detail what all of the rooms in the new building have become. When we get into here we will have room to grow. Right now theyre meeting in the kitchen; theyre meeting in the gym. Were using every ounce of space that weve got.

Before Caroline was born Auten was employed as a cosmetic buyer for Clinique using her personality and people skills. Today she uses those same skills as development director to raise money to help as many students as possible attend the high school through financial aid scholarships.

Im an advocate between Coastal and the community she says.

Looking out of the principals office window and seeing the athletic director in the soccer field between Myrtle Grove and the soon-to-be Coastal Christian building. She says how in the ­beginning she and the other women were the ones calling around to other schools in the area to schedule games for the students toplay.

When Auten began as a volunteer to help make the first standalone nondenominational Christian high school in Wilmington a reality she would leave brochures wherever she went like her car dealer dentist or her childrens orthodontist office. But mostly the schools growth is due to word of mouth Auten says.

We all have worked hard together to make Coastal what it is and its Gods school she says.

Auten repeatedly expresses her appreciation to the community for its support throughout the process.

Its all about the students she says.

Caroline is one of 18 students from the first graduating class who is now majoring in accounting as a junior at the University of North Carolina Wilmington. She is also in the Christian sorority Sigma Alpha Omega.

She doesnt miss basketball games even though Im not in them anymore Caroline says.

Auten and admissions director Jennifer Snyder rolled off of the board but continued to attend the meetings for several years. Snyder says all of the womens families sacrificed a lot for Coastal Christian to become what it is today.

I was here for hours every day and so was Cindy Snyder says. I was like I might as well be employed It was our everyday. It was all-consuming.

Snyder works in the front office at Temple Baptist Christian Activity Center the current school location using her visual marketing skills to show families what the school has tooffer.

She walks through the school dodging students in the hallways and telling the history of the school in the now-filled classrooms as she does when she gives students and parents tours of the facility.

We are busting at the seams Snyder says about the current Coastal Christian location.

The school began with a meeting in 2005 she says and probably about 15 years of prayer before that time.

Snyder has known Auten for a decade. They met when their children were both at Myrtle Grove and they were members of the Parent TeacherAssociation.

It is obvious Auten was called to her job Snyder says because there is no way she can be compensated for everything she does.

It was never just for our kids Snyder says. It never was. It was about what we felt God wanted in Wilmington Snyder says.

The journey has been full of both challenges and blessings she says. And the women who were acquaintances are now goodfriends.

Autens happiness is an inner peace she has in her walk with Christ says volunteer Brenda McCombie Coastal Christian projectmanager.

She can always make your day brighter she says adding that her 84-year-old mother Irma Baker calls Auten butterfly.

When the doors first opened in fall 2006 Auten worked in the front office as a volunteer answering phone calls for the principal along with other parents scattered throughout the building who were lending a hand to the cause.

We still depend on volunteers at Coastal Auten says. We couldnt survive without volunteers.

The students also do their part to give back to those who have given so much to the school through community service projects.

All of the women can easily recall memories from the early days when the school was simply a vision.

We all had to sell a school that didnt exist McCombie says.

The school which is now in its final stage of construction has a design that will allow the building to expand as it continues togrow.

I would say that to take on a project like this you have to have a sacrificial heart Snyder says. And thats Cindy.

How they Did It

In 2005 six mothers dropped their kids off at Myrtle Grove Christian School. Then they regrouped inside the Pastors study. Their mission: to lay the groundwork for a new Christian high school. Within a handful of months the co-founders brought the school to life. Once the Temple Baptist Activity Center was leased in mid-December 2005 the group moved its planning sessions to the youth room there.

Co-founder Brenda McCombie says she would wake up in the morning with a list of what to do next from creating a school logo and colors to choosing the school name.

None of us are really education majors she says. Im sure there are a lot of different methods for starting schools.

The very first things to do: setting up a phone number and a mailing address.

Youve got to start looking like you really exist McCombie says. Its just like starting a business of any type.

The school officially came together in 2006 with the hiring of the first administration director Kirk Nielsen who came on board to lead the school. The group drove to South Carolina to interview and subsequently hire Nielsen away from the Conway Christian School.

At that point there were seven students on the enrollment list.

Nielsen crafted the faculty and student handbook with guidelines from North Carolina Division of Non-Public Education standards. He then tailored a college-prep curriculum to the student body. Other Christian schools in North Carolina shared their models as aids.

We wanted to be a traditional school not on block scheduling says co-founder Cindy Auten. That was a big decision.

The year-round classes made it possible for the school to hire fewer teachers and save money while maintaining a 13-1 student-teacher ratio.

We wanted to have small classroom sizes Auten says. Weve been able to manage that as weve gone along.

Many of the textbooks and other materials were donated from Ashley High School. The student lockers came from the old jail downtown.

We cant afford to buy everything new Auten says. Thats so outrageously expensive.

Nielsen McCombie and Morris Jackson Permenter interviewed faculty and staff for the positions. The candidates were found by word of mouth and from replies to ads.

Candidates began the interviews with their Christian testimonies.

Every faculty member is there to help mentor young people in their faith McCombie says.

Eleven full and part-time faculty members were selected with parents filling in everywhereelse.

The first budget supported 70 students but only 39 attended the first year. Advanced Placement courses have increased each year providing students like Autens daughter Caroline an advantage when applying to highly-rated colleges and universities.

Coastal Christians curriculum also offers students an honors track and an on-level track depending on their needs.

We needed parents to serve lunch and parents still do that for us Auten says. In the beginning the mothers were even the bus drivers. We didnt have a bus so we used our [own] minivans.

Coastal Christian High School located behind Myrtle Grove Christian School on land donated by Myrtle Grove at 1150 The Kings Highway opens by appointment for tours after November 15. The first open house is planned for 7 p.m. on January 17.