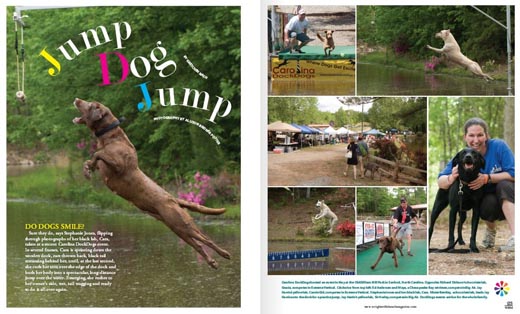 Sure they do says Stephanie Jones flipping through photographs of her black lab Cara taken at a recent Carolina DockDogs event. In several frames Cara is sprinting down the wooden dock ears thrown back black tail streaming behind her until at the last second she curls her toes over the edge of the dock and hurls her body into a spectacular long-distance jump over the water. Emerging she rushes to her owners side wet tail wagging and ready to do it all over again.

Oh I love watching her face when she comes up!” says Jones who works in Wilmington and travels to Sanford North Carolina to practice with her dogs. “When youre on that dock with your dog theres nothing else. I mean its all about you your dog and that bond. Its just so much fun. I cant describe it!”

Dock jumping is serious fun for thousands of dog lovers who are looking for something cool to do with their dogs. Carolina DockDogs an affiliate club of the national and international organization DockDogs Inc. is considered to be the strongest club on the East Coast today. More than 20 clubs in the United States and Canada compete for regional and national titles in events held throughout the country. World Championship events held in Stillwater Minnesota are by invitation only and they culminate in the highly prized Iron Dog award. Clubs have sprung up in Japan the United Kingdom Australia and the list keeps growing.

Its the perfect mix of good-natured people their dogs and water. “Its such a diverse crowd ” says Jones of the local club. “Weve got engineers bankers a politician. Its such a gamut but everybody loves the dogs and we just get out there and have the best time theres no throwing the dogs in theres no pushing the dogs in. Not allowed.”

When the sport first appeared on ESPN Great Outdoor Games in 2000 thousands of spectators unexpectedly packed the event and traffic was snarled for city blocks. Since then the sport has grown into a competitive worldwide organization featuring three major DockDog events: Big Air a long jump competition; Extreme Vertical in which dogs jump up toward a bumper that is raised higher and higher; and Speed Retrieve where dogs compete to see who can run jump swim and pull down a dead fowl trainer (DFT) or Flappy in the shortest time.

Naturally it is a crowd-pleasing spectator sport and Carolina DockDogs president Jay Harris and his dog Sir Harley love to work the crowd. “There are people who come to the events just to see him ” says Harris of his yellow lab. “He is just one of these photogenic dogs. And hes a ham! He knows what hes doing. It doesnt make any difference whether hes jumping 20 feet or 25 feet he looks good no matter what. They like watching him. Trust me hes just as big a ham as I am. But thats one thing Ive learned. Its me and Sir Harleys time on the dock. Weve got 90 seconds from the time you hit the dock. I let him be himself and he lets me be myself.”

Of course dogs love it but spectators with or without dogs are showing up in droves to watch everything from a fun-loving Boston Terrier to a perky Jack Russell take on the challenges of distance and height. Although labs outnumber other breeds at these events the competition is open to all breeds of dogs that are at least six months old says Harris.

Special training is not required but Harris does admit that it helps to work out with your dog. “The most fun dog to watch is the Jack Russell. They have a lot of personality. And thats another thing about this sport. You have two personalities on the dock you have one human and you have one canine. Sometimes theyre together thats what people tell me about me and Sir Harley and then there are the other ones who get up there and the dog is simply being a dog and the human is getting frustrated because hes being a dog ” laughs Harris. “So its a good thing to see.”

Harris entered his first DockDogs event in South Carolina in 2005 after watching a competition on television. But it was Sir Harleys first exposure to the sport and he was not bashful. His first official Big Air jump was over 15 feet an impressive jump for a first timer. In the finals the following day he finished at more than 19 feet and won 6th place in his very first event. Three weeks later Harris and his dog eager to try again drove to Savannah Georgia.

“We get out there on Saturday morning and he rips off a 23.5 [foot jump] ” says Harris who lives in Sanford North Carolina. “He jumped over 23 feet all weekend and ended up winning that event with an excellent excellent personal best of 23.9 feet. So needless to say we were hooked.”

Last year Harris formed Carolina DockDogs and found that other dog lovers had been looking for just this type of sport to sink their weekends into. The club covers the entire state and includes South Carolina and Virginia members. The home dock where club members can practice with their dogs for the Big Air Extreme Vertical and Speed Retrieve competitions is located at Ole Gilliam Mill Park in Sanford a two-and-a-half-hour drive from Wilmington.

“With all this water around Id love to find a place close by to practice instead of driving all the way to Sanford ” says Jones. “There are places we can take them swimming but to get them jumping is the key. There are a lot of dogs who love to swim but that dock and that two-foot drop will cause hesitancy in some of them. And its just working them through it. Youre not going to make them go in its building confidence.”

The Big Air is probably the biggest attention getter at any competition. Harris says that most dogs jump 15-19 feet. A handful of dogs jump more than 23 feet. The world record for the Big Air was set by a greyhound named Country who lives in Pennsylvania and jumped a whopping 28 feet 10 inches. DockDog regulations measure from the “tail set ” where the body meets the tail. Other dock diving organizations measure from the nose or other areas.

So whats Countrys big secret? According to Harris its all in the arc. “He takes about four strides down the dock and then he goes airborne. But he goes up and actually arcs. His rear legs are straight back and his front legs are straight out in front of him ” explains Harris. “He looks just like an arrow. The first thing that goes in the water is his front feet. He actually goes up and arcs and comes down head first just like somebody making a dive. Now see my labs they cant do that. Their butt is coming down all the time.”

DockDogs is such a crowd magnet that last year Carolina DockDogs had three events for which they were contracted by local businesses or county organizers trying to draw family-oriented crowds. At some of these locations the national DockDogs organization brings in a dock and a 20×40-foot-long pool to replace a natural body of water. “Its amazing to watch ” says Jones. “The pool is a collapsible pool that actually rolls up. They transport it all in and set it up.”

“There are some people who are super serious about this but most people are out there just to have fun ” says Jones. “And your dog doesnt have to be super-trained. The owner of the dog that holds the world record in Extreme Vertical came out to the South Eastern Wildlife Exhibition a couple of years ago just to see if his dog would like it and the dog broke the world record! There are some that are just naturals at it. You dont know till you try and in the meantime youre having loads of fun.”

Dogs jump for fun they jump for their owners and some are just toy or ball crazy. Sara Andersen and her husband Ed compete with their dogs Maya a Chesapeake Bay Retriever and Trixie a Belgian Malinois. “Big Air is the one that comes most naturally to my dogs ” says Sara who lives in Rocky Point. “I think this is because the ball/toy is being thrown is in motion and so they are driven to go get it. I know they enjoy it because they go absolutely nuts when we are at events.”

This year Harris says he is pleased to have four events and one stand-alone competition at the Ole Gilliam Mill (on May 1-2) that will become an annual event. Usually the club offers a Fun Jump on Friday before the competition begins on Saturday. For a $10 donation people can give their dogs the chance to try out the jump all day just to see if they like it.

Its worth it just to see the dogs smile.