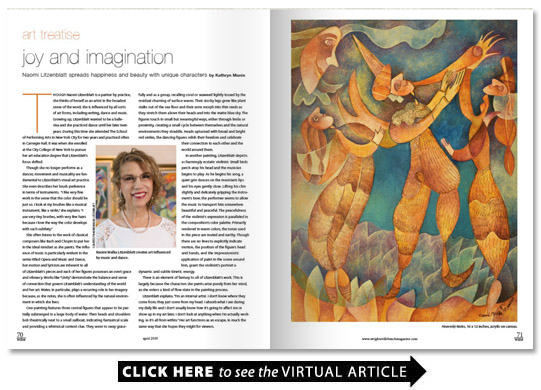 Though Naomi Litzenblatt is a painter by practice she thinks of herself as an artist in the broadest sense of the word; she is influenced by all sorts of art forms including writing dance and music. Growing up Litzenblatt wanted to be a ballerina and she practiced dance until her later teen years. During this time she attended The School of Performing Arts in New York City for two years and practiced often in Carnegie Hall. It was when she enrolled at the City College of New York to pursue her art education degree that Litzenblatt’s focus shifted.

Though she no longer performs as a dancer movement and musicality are fundamental to Litzenblatt’s visual art practice. She even describes her brush preference in terms of instruments. “I like very fine work in the sense that the color should be just so. I look at my brushes like a musical instrument like a violin ” she explains. “I use very tiny brushes with very few hairs because I love the way the color develops with such subtlety.”

She often listens to the work of classical composers like Bach and Chopin to put her in the ideal mindset as she paints. The influence of music is particularly evident in the series titled Opera and Music and Dance but motion and lyricism are inherent to all of Litzenblatt’s pieces and each of her figures possesses an overt grace and vibrancy. Works like “Unity” demonstrate the balance and sense of connection that govern Litzenblatt’s understanding of the world and her art. Water in particular plays a recurring role in her imagery because as she notes she is often influenced by the natural environment in which she lives.

One painting features three central figures that appear to be partially submerged in a large body of water. Their heads and shoulders bob theatrically next to a small sailboat indicating fantastical scale and providing a whimsical context clue. They seem to sway gracefully and as a group recalling coral or seaweed lightly tossed by the residual churning of surface waves. Their stocky legs grow like plant stalks out of the sea floor and their arms morph into thin reeds as they stretch them above their heads and into the matte blue sky. The figures touch in small but meaningful ways either through limbs or proximity creating a small cycle between themselves and the natural environments they straddle. Heads upturned with broad and bright red smiles the dancing figures relish their freedom and celebrate their connection to each other and the world around them.

In another painting Litzenblatt depicts a charmingly ecstatic violinist. Small birds perch atop his head and the musician begins to play. As he begins his song a quiet grin dances on the musician’s lips and his eyes gently close. Lifting his chin slightly and delicately gripping the instrument’s bow the performer seems to allow the music to transport him somewhere beautiful and peaceful. The peacefulness of the violinist’s expression is paralleled in the composition’s color palette. Primarily rendered in warm colors the tones used in the piece are muted and earthy. Though there are no lines to explicitly indicate motion the position of the figure’s head and hands and the impressionistic application of paint in the scene around him grant the violinist’s portrait a dynamic and subtle kinetic energy.

There is an element of fantasy to all of Litzenblatt’s work. This is largely because the characters she paints arise purely from her mind as she enters a kind of flow state in the painting process.

Litzenblatt explains “I’m an internal artist. I don’t know where they come from; they just come from my head. I absorb what I see during my daily life and I don’t usually know how it’s going to affect me or show up in my art later. I don’t look at anything when I’m actually working so it’s all from within.” Her art functions as an escape in much the same way that she hopes they might for viewers.

“I’m so attracted to them ” she continues. “When I’m painting and I’m working with these figures I can be anything I want to: I can be a queen a princess I can be flying through the air. They take me some place new and special; to wherever I want to be. And they take me to a beautiful work.”

A painting from her Reflections series showcases Litzenblatt’s ability to create unique characters that are relatable but don’t reflect images or archetypes that the viewer has encountered before. This composition depicts two figures positioned closely together in front of a dark oval-shaped landscape feature that is reminiscent of the mouth of a cave. Presumably this dark center is the night from the painting’s title and it is flanked on all sides by brightly colored and finely rendered foliage. In the middle of the piece the two figures link their arms together with earnest smiles. One of the figures seems to be male and the other female and their clothing is constructed of leaves and acorns. While their bodies overlap and blend gently into one another their heads lean slightly away from each other. The characters are charming and compel the imagination to invent a story or reasoning behind their uncommon depiction. Yet in scrolling through a mental Rolodex of known and encountered figures the viewer is not likely to find anyone or anything quite like these two. This inability to categorize the characters depicted along with the seductive sweetness of the image and the fine lines and soft colors that Litzenblatt utilizes lead to an inviting and unique aesthetic experience.

Many of her paintings tell complex and uplifting stories about the artist and her view of the world. Indeed the supernatural qualities in each piece are heavily influenced by Litzenblatt’s impassioned belief in the beauty and joy to be found in our circumstances as well as in the people around us. As she puts it “I hope that whatever I put into this world will enhance and make life richer for others. Not everyone is going to march for a cause but we need to try to enhance life for everyone in some way. A smile for example can make a massive difference in someone’s day. Many people have hard lives it’s a world of such difficulty and a little kindness can give someone a lift. The artist sees the world — and there is so much beauty in it. And we have to try in our own ways to focus on this.”

Her paintings also engage themes of family friendship nature love the human psyche and the cycles of life and loss.

Litzenblatt often develops her paintings while traveling on airplanes. She will typically sit by the window sketchbook in hand and allow herself to be transported into the unique and vivid realm of her characters. She has developed an almost meditative relationship to the figures she paints and the joyous and bright world that they live in. A world and an experience to see for yourself it will infuse any day with sunshine and hope.