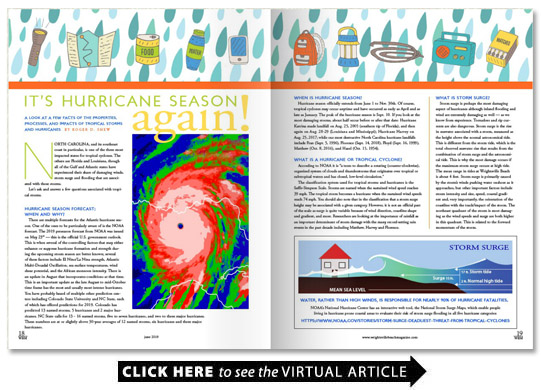 North Carolina and its southeast coast in particular is one of the three most impacted states for tropical cyclones. The others are Florida and Louisiana though all of the Gulf and Atlantic states have experienced their share of damaging winds storm surge and flooding that are associated with these storms.

Hurricane season forecast: When and why?

There are multiple forecasts for the Atlantic hurricane season. One of the ones to be particularly aware of is the NOAA forecast. The 2019 preseason forecast from NOAA was issued on May 23rd — this is the official U.S. government outlook. This is when several of the controlling factors that may either enhance or suppress hurricane formation and strength during the upcoming storm season are better known; several of these factors include El Nino/La Nina strength Atlantic Multi-Decadal Oscillation sea surface temperatures wind shear potential and the African monsoon intensity. There is an update in August that incorporates conditions at that time. This is an important update as the late August to mid-October time frame has the most and usually most intense hurricanes.

When is hurricane season?

Hurricane season officially extends from June 1 to Nov. 30th. Of course tropical cyclones may occur anytime and have occurred as early as April and as late as January. The peak of the hurricane season is Sept. 10. If you look at the most damaging storms about half occur before or after that date: Hurricane Katrina made landfall on Aug. 25 2005 (southern tip of Florida) and then again on Aug. 28-29 (Louisiana and Mississippi); Hurricane Harvey on Aug. 25 2017; while our most destructive North Carolina hurricane landfalls include Fran (Sept. 5 1996) Florence (Sept. 14 2018) Floyd (Sept. 16 1999) Matthew (Oct. 8 2016) and Hazel (Oct. 15 1954).

What is a hurricane or tropical cyclone?

According to NOAA it is “a term to describe a rotating (counter-clockwise) organized system of clouds and thunderstorms that originates over tropical or subtropical waters and has closed low-level circulation.”

The classification system used for tropical storms and hurricanes is the Saffir-Simpson Scale. Storms are named when the sustained wind speed reaches 39 mph. The tropical storm becomes a hurricane when the sustained wind speeds reach 74 mph. You should also note that in the classification that a storm surge height may be associated with a given category. However it is not an official part of the scale as surge is quite variable because of wind direction coastline shape and gradient and more. Researchers are looking at the importance of rainfall as an important determinant of storm damage with the many record-setting rain events in the past decade including Matthew Harvey and Florence.

How are hurricanes named?

Storms are named when they meet tropical storm status (sustained winds at or greater than 39 mph. Before 1950 they were named by location and year such as the 1933 Outer Banks Hurricane. Then for a short period of time in 1951-52 Alpha Baker Charlie etc. was used but that wasn’t adequate to differentiate yearly storms so in 1953 using female names was initiated. It wasn’t long 1954 before one of the most infamous of female-named hurricanes (Hazel) made landfall in Brunswick County. This was the naming convention until 1978 when alternating female and male naming was instituted. The names are repeated every six years unless the storm/hurricane is particularly destructive and/or deadly. In that case the name is retired and never used again. There are many “retirees” but examples include Katrina Sandy and Harvey as well as ones that have been destructive in North Carolina including Hazel Fran Floyd Isabel Irene and Matthew. Florence and Michael have been retired as hurricane names from the 2019 season. Francine will be used in 2024 instead of Florence and Milton in place of Michael. The names are given by the World Meteorological Organization.

The warm waters of the Atlantic are churning … are you prepared for a hurricane? If you haven’t done so already you should prepare yourself your family your home and your business for the threat of a potential storm.

Please make sure you also have a hurricane plan for shelter food water evacuation recovery and of course your own health.

Assess your situation to understand your needs in disaster preparedness: consider your family and the special needs they might have; young children elderly parents or grandparents people with disabilities medications pets special foods and anything else you can think of that needs more attention.

Know the local evacuation plan where you can go have two options including the location of the emergency shelters. If you’re told to evacuate go early; roads will be clogged with outbound traffic. Take spare vehicle and house keys; garage door openers will only work with power.

Roger D. Shew is a lecturer in the Department of Earth and Ocean Sciences and Environmental Sciences UNC Wilmington.