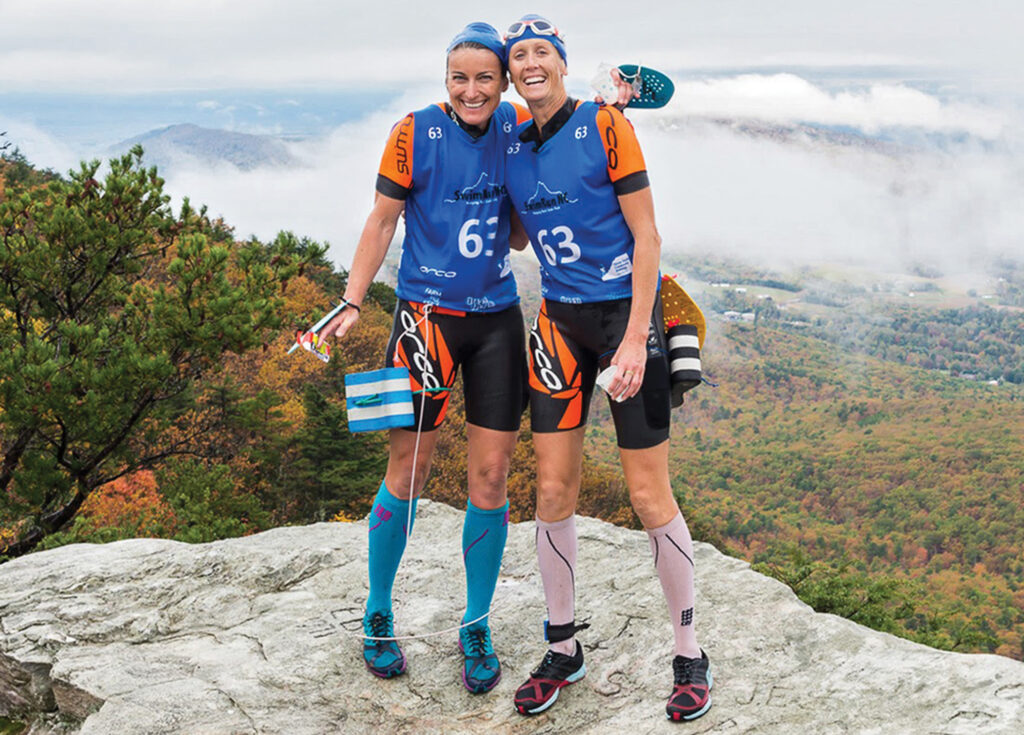 Jennifer Devers, left, and Bridget Phillips pause for a team photo at the top of Moore’s Wall in Hanging Rock State Park during the 2017 SwimRun NC, the pair’s first SwimRun event. Photo Courtesy of Jennifer Devers

When we hear the phrase “island hopping,” we tend to think there must be some sort of boat involved. Perhaps a cruise ship or locally, we might imagine cruising from island to island in a simple watercraft like a jon boat or a Carolina Skiff.

But in this case, there is no boat. There are no Jimmy Buffett or Kenny Chesney tunes blaring from Bluetooth speakers. There are shoes. And neoprene shirts.

Speaking of shoes, Kristen Jeno’s have holes in them; not from wearing them thin, although she certainly runs enough to do so. Jeno drilled holes into a perfectly good pair of Hokas because in this type of island hopping, there are rocks and sticks and mud. And in these types of elements, everything gets wet and anything goes, so she engineers her own.

From Sweden, with Love

Around these parts, Jeno is well-known as an athlete and coach. Over the past 13 years, she’s trained hundreds of swimmers, runners, cyclists and triathletes, mostly through Without Limits, a local coaching and events program. She founded Swim the Loop, the first open water endurance race in the Wilmington/Wrightsville Beach area. She holds more certifications and awards in the racing world than can be appropriately listed within a space-limited magazine article.

Six years ago, she poked her head out of the world she swims in to see what else was out there. She found SwimRun, a competition that combines a few of her favorite things: swimming, running, teamwork and, most importantly, adventure. Figuring the best way to learn more was to actually experience it, she and fellow athlete Jenny Ledford booked a flight to Sweden, home of the ÖTILLÖ SwimRun World Championship.

They were one of only six U.S. teams at the race and when it was over, Jeno remembers thinking, “This is the best sport in the whole wide world so we’ve got to bring this to the States.”

Shortly after the trip to Sweden, Jeno began scouting locations to curate an event closer to home and stumbled upon Lake James, a hidden gem about 35 miles west of Hickory.

It took two years to get approval and permits and develop the course, but founding SwimRun Lake James — one of the first of its kind in the U.S.  — was worth it. This is Jeno’s fourth year as co-director with her partner, Tony Hammett, although it was canceled due to COVID-19 last year.

Lars Finanger, who competed on one of the six U.S. teams at the world championship in Sweden in 2015, beat Jeno to the punch with a SwimRun event in Maine that was the first in the U.S.

Today, Jeno, Finanger and Herbert Krabel (director of SwimRun NC, which takes place in Hanging Rock State Park) are widely considered the ringleaders for SwimRun being adopted by American athletes. Now there are a handful of races in the U.S. from San Juan Island in Washington to Michigan, Maine, the two in North Carolina, and one in Texas. Like buds awaiting the warmth of spring, SwimRuns seem bound to blossom, coloring the map on down the road.

So what is SwimRun? Well, it’s a lot like it sounds. Of course, there is swimming and there is running. But unlike a traditional aquathlon where racers swim and then transition to run, this unique race tends to take participants off the beaten path so they can blaze their own trail over the hills, onto the islands, and through the woods.

“The sport itself is quite unique,” Jeno explains. “There’s no real course. There’s a lot of bushwhacking. I flag trees through the woods. There is a course, but you don’t have to follow a trail. It’s not like a marathon where it’s 26.2 miles. Every course is different with different distances and sections unique to the area. You kind of just wing it and make something fun with what you have.”

Another unique feature is that athletes compete in pairs.

“You’re required to stay within approximately 15 feet of your partner so teams are often tethered during the race,” says Jennifer Devers, a local athlete Jeno coaches.

There are markers to keep racers on the right track but, like children coursing through a jungle gym, no team will take the same path. Devers says it’s like “playing in the woods with my friend. You get through it together. You help each other when needed. It’s beautiful.”

Unlike a triathlon, competitors carry everything they plan to race with. Because these are hardy events with cold water swimming, standard gear includes goggles and swim cap, a very specific neoprene wetsuit, paddles and shoes. Pull buoys, fins, gloves and vests are optional and dependent on the conditions and the team.

Wilmington SwimRun athletes Erin Cooper, a director of a global life sciences company, and Dr. Eileen Caquias-Gonzalez, a family practitioner, make up Team Double E’s. As you can tell by their name, a sense of humor carries the weight of the team. And humor, like the trails, goes a long way.

Both Cooper and Gonzalez are early risers.

There also aren’t too many people who can wear the hats of mother, professional, and athlete dedicated to practicing six days a week. But these two are the perfect pair balancing out every move and mood.

“She’s my exercise wife,” Gonzalez laughs when describing her workout partner of over a decade.

She mentions a study in which those who lived to 100 all had one thing in common — meaningful relationships with others. Gonzalez hinted that she believes her race companion may be both of their tickets to long and happy lives.

Jeno prepares a structured plan for local teams, easing them in with workouts that last around one hour. Gradually, she builds them up to 12-mile runs and 3-mile swims that take up to four hours to complete. For athletes like the Double E’s, routines may change based on the race they take on. But SwimRun or not, they’d still be coming together six days a week to train.

Local athletes take advantage of Banks Channel and the Intracoastal Waterway when they can, although this winter has been colder and wetter than usual. Jeno tells her athletes if the cumulative temperature (water and air) is less than 100 degrees, minimize the time spent in the water.

Gonzalez and her partner haven’t let the weather affect their training.

“It was raining but you’re already wet so it doesn’t really matter,” she says.

They also like to keep things simple by swimming at the YMCA pool.

Jeno’s plan calls for more running than swimming just like the race, but she also includes strength training drills like burpees and lunges to be sure athletes training on the beach flats nearby are ready to tackle big hills and rocks and elevation.

But the nature of the sport adds a less intense layer to the group.

Winning is a plus if and when that happens. Devers and her Wilmington partner Bridget Phillips placed second in the female division three years in a row. But it seems the satisfaction comes more from stories of the adventure than from the timed results.

“We’re not there to win something,” Gonzalez says. “We’re there for the experience.”

Every SwimRun competition is unique, not only from event to event but from team to team. Each course will offer a different challenge that’s never the same.

“The distances are dictated by the terrain in these so they’re all different, ranging from four hours to 12 hours long,” Devers explains.

Jeno likes to say the long course at Lake James is “15 miles-ish running and 4 miles-ish swimming, depending on how you go about it or if you get lost.”

For most, Lake James will take around four to five hours navigating in and out of the water. And island hopping, of course.

To find out more about SwimRun Lake James, search SwimRunNCLakeJames. The short course and long course races are sold out for 2021.