It Takes This Village

Pencil-thin 10-year-old “Lilly ” shaggy bangs drifting across her forehead wearing a pink T-shirt and baggy black Capri pants with a daisy design shakes her arms up and down to the rhythm of a guitar. Beside her a petite 8-year-old blonde with turquoise butterfly barrettes and matching shirt imitates her moves like a back-up dancer in an all-girls rock group.

To an onlooker they appear to be two little girls dancing up a storm at a small-town concert but these young people were escorted over to this bright conference center from a 6 000-square-foot locked care facility a few hundred yards away. Later under the watchful eyes of their caretakers they will return to the Psychiatric Residential Treatment Center a building whose cheerful butterfly designs on the windows belie the fact that it is a locked-down mini-hospital with television monitors in the hallways and nurses tucked away in quiet offices.

These are some of the children of the Yahweh Center Childrens Village ages 5 through 12 who are loved and guided by a team of dedicated staff members and by an Invisible Presence greater than any human being.

The stories of these little people (the average age is 8) are generally tales of betrayal and loss. They have been abandoned by those they trusted and are left to come to terms with the unspeakable.

One of the youngest residents “Logan ” is a 5-year-old boy who had his teeth knocked out by his mothers boyfriend. The social services system stepped in and sent him to a psychiatric hospital. While awaiting a transfer to the Yahweh Center alone and helpless he was sexually assaulted. “How is he supposed to manage all that?” asks Carla Roberts founder and CEO of the Center. “Everyone here had to grit their teeth when he arrived. He couldnt compute it all. It was too much. We had to help him find words for his fears.”

Resident medical director and child psychiatrist Dr. Douglas Waldrep sees waves of kids like “Logan” coming to the Center. These kids arrive over-medicated and scared to death. A graduate of West Point a retired colonel and a former child-issues consultant to the Surgeon General Waldrep likens his charges to the soldiers he helped at Walter Reed Army Medical Center. “Like the soldiers fighting for us these kids are fighting for their lives ” Waldrep says. Often he has to recruit the support of the staff at the Center before he cuts back the medication for his young patients. “I ask the staff if they can handle the change ” he says. As a child works through issues its typically not pretty. “The staff is the real hero.”

One of the things that make the Yahweh Centers staff members heroes is that they dont give up. As they see it their mission is to minister to the “least of these” the children. “The child welfare system has failed these children miserably ” Roberts says shaking her head. “We fight the good fight and sometimes we make people mad because we push people in the system. We say Thats not good enough.”

The Center is a licensed treatment provider with a Psychiatric Residential Treatment Facility (PRTF) the first built from the ground up in North Carolina. The PRTF is basically a mini-hospital with full-time nursing staff. The 14-acre village also accommodates placement for children who require less intensive monitoring but still need 24/7 highly structured care. Besides the child psychiatrist on staff there is a large team of licensed social workers teachers nurses residential counselors and dedicated support personnel who work in three shifts around the clock. All operate with the highest standards in accountability to the agencies that fund them and receive referrals from all over the state.

This team has a special tool in their arsenal: faith. “Prayer its some of the greatest work that gets done here ” says Diane Teague head of employment. The team turns to the power of Jesus Christ to give them and the children the strength they need for the tough journey. Sometimes they make a full stop in the middle of a team meeting on a particularly difficult case and pray for guidance. 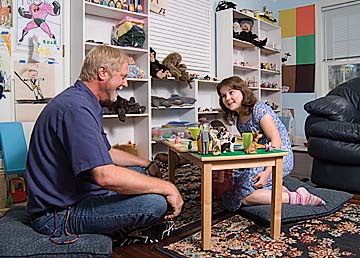 The staff goes above and beyond the call of duty to get the kids on the road to recovery. The story of “Ryan” is one of many examples. “Ryan” was approaching his ninth birthday in a psychiatric hospital in Raleigh. Physically abused as a young child he was the scapegoat in the family the “bad” child. In and out of treatment including the Yahweh Center and the foster care system most of his life he viewed his coming birthday with despair. He had little connection with his former foster parents and no one to turn to. He started having suicidal thoughts and eventually had to be hospitalized for his own safety.

Alone on his birthday he was despondent. Vance Williams one of “Ryans” former social workers at Yahweh heard of the situation and took matters into his own hands. He picked up a birthday cake and headed off to the psychiatric hospital in Raleigh. “Ryans” story spilled out of him. “I never ever had a good birthday ” the young boy told Williams. “We all recognized that it was very important for this child to have someone who had a relationship with him on this birthday ” Williams says passionately.

Williams a 30-year veteran child and family therapist sees kids like “Ryan” from all over the state. He is ready for any emergency. His office is bursting with neatly lined shelves of puppets action figures and a tea set for impromptu tea parties all designed to help children play their way to health.

The Center also conducts child-placing services including therapeutic foster care and adoption services. It brings its usual high standards and sense of urgency to this arena too.

“Most people dont have a blind date and then get married but the system expects kids to do exactly that ” says Roberts. The Yahweh Center fights to prepare the children and the families for the challenge of foster care and adoption. It provides the kids with a place to learn the meaning of safety and belonging. Once the children begin to feel safe the staff begins work on the belonging piece. “If you dont belong to anybody you just cant finish developing. These kids deserve that ” asserts Roberts.

The Center also runs day treatment services including a school for children living at Yahweh as well as outside referrals. They are also slowly building an outpatient psychiatric division for Medicaid-eligible children a real need here in eastern North Carolina. One entire house sits empty waiting on funds to convert it to a second secure psychiatric treatment house a facility that is already needed. Roberts estimates the cost at $100 000.

Finding the funds to do all thats needed is not easy in this economic downturn but in spite of this and all the other challenges hope runs rampant at the Yahweh Center. There is a sense of peace and quiet on this rural property in northern New Hanover County. A pile of used bicycles huddles on the playground near an almost-completed storage shed the work of volunteers from Scotts Hill Baptist Church. Signs proclaiming future development plans are everywhere. A chapel is in the plans with pews and stained-glass windows already donated. Many of these projects are works in progress awaiting capital resources in the form of minor and major donors.

The Yahweh Center is an amalgam of donated time and resources from businesses churches and individuals in the eastern part of the state. Compensation received for clinical treatment services is not enough to keep the village operating. Increased governmental regulation means mountains of paperwork. “Every individual action requires five pieces of paper ” bemoans Roberts. With a budget of $3 million dollars the center must raise 40 percent of that figure through donations and fundraisers annually to keep it functioning in its present capacity a demand that shows no signs of abating there are many children on the waiting list who desperately need placement.

The Yahweh Center a Christian nonprofit organization moved to its present location in 2001 after it outgrew its Wrightsville Avenue home where it started as an emergency shelter in 1988 the first of its kind in eastern North Carolina. After realizing Yahweh was serving as a quality “warehouse ” Roberts knew she wanted to do more. Her small clients need long-term rescue from families most with substance abuse problems who physically and sexually abused the weakest link the children. And to compound the problem the kids were like moving targets endlessly transported from place to place.

Today the children desperately need someone to give them a vision of who they can become. “We see kids as God intended them to be and not what theyre like by other peoples measurement tools ” says Roberts. Over the years her trust and the trust of her staff have saved many children from a devastating fate. “What would happen to these kids if we werent here? Nothing good ” admits Roberts.

In the end of all the gifts Roberts gives the children none is more important than her strong sense of faith the soul of the Yahweh Center. “Its the vision that God gave me ” Roberts says. “If Hes not here He wont keep it here.”

The Yahweh Center more than does its part; the community must do its share too. The lives of children hang in the balance.