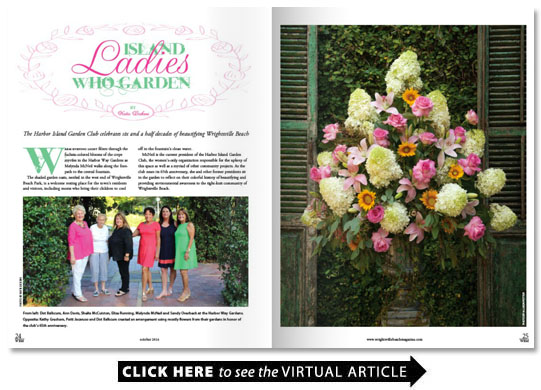 Warm evening light filters through the fuchsia-colored blooms of the crepe myrtles in the Harbor Way Gardens as Melynda McNeil walks along the footpath to the central fountain.

The shaded garden oasis nestled in the west end of Wrightsville Beach Park is a welcome resting place for the town’s residents and visitors including moms who bring their children to cool off in the fountain’s clean water.

McNeil is the current president of the Harbor Island Garden Club the women’s-only organization responsible for the upkeep of this space as well as a myriad of other community projects. As the club nears its 65th anniversary she and other former presidents sit in the garden to reflect on their colorful history of beautifying and providing environmental awareness to the tight-knit community of Wrightsville Beach.

Since its inception the nonprofit has planted the trees that line Pelican Drive driven the establishment of the recycling center in the early 1990s hosted town employee appreciation annual lunches taught fifth-graders about the environment and filled the town with beautiful blooms and festive decorations.

Ten charter members founded the club in 1952 and over the years its roster has swelled to include 62 Wrightsville Beach residents and legacy members including Frances Russ who became the town’s first female mayor in 1985.

During the early years the women wore the prim-and-proper attire of hats and gloves as they met in the privacy of people’s homes. Meetings now take place at Little Chapel on the Boardwalk on Fayetteville Street where members — dressed much more casually — gather to plan community beautification as well as to listen to lectures overseen by the Garden Club of North Carolina on topics ranging from flower arrangement to environmental conservation.

Of course these meetings are not solely instructive; they also are filled to the very brim with exactly what cast so many of the Harbor Island Garden Club’s members under its spell from the beginning — rampant laughter camaraderie and friendship.

Since its inception the nonprofit has planted the trees that line Pelican Drive driven the establishment of the recycling center in the early 1990s hosted town employee appreciation annual lunches taught fifth-graders about the environment and filled the town with beautiful blooms and festive decorations.

The club’s busiest decoration times occur during the holidays especially around Christmastime when they hang lights and close to 60 wreaths on garbage trucks light posts and the Heide Trask Drawbridge largely thanks to the Wrightsville Beach Parks and Recreation Department employees who always do the heavy lifting.

Since 1984 members have poured their time and energy not only into cultivating gardens but also the minds of fifth-graders through a special program with Wrightsville Beach School.

The wreaths are made of artificial greenery embellished by club members with pinecones berries nuts and red ribbons. There was a time when they were made from live cuttings that public works employees gathered from the cypress trees on the island. Back in the day the club would teach Wrightsville Beach residents how to create their own wreaths like the ones the members made to adorn the town.

That ended when Hurricane Fran hit in 1996 “turning all our green to brown ” laughs Sandy Overbeck club member of 36 years.

Two years ago the club started a new tradition with the dedication of the Plant It Pink Garden with vivid pink blooms that draw the eye in October National Breast Cancer Awareness Month. The previous year for a photo in these very pages Wrightsville Beach Park workers joined garden club volunteers to create the pink ribbon tree. They hung approximately 100 long pink ribbons adorned with handwritten names to honor those who have fought and those who continue to fight against the disease. The ribbons have become a cherished annual event for the club.

“When those pink ribbons flutter in the breeze they sound just like angel wings ” Overbeck says. “You can just imagine angels fluttering around.”

Ann Davis who joined the club 57 years ago and is the longest tenured member is a fixture at every traditional employee appreciation luncheon hosted by the club in February. She has won the affection of the town employees and her fellow club members with her quick wit and contagious smile.

She and Davis are partial to the gardening focus of the club which is often competitive — there’s a yard of the month award. Both have won numerous local and national prizes for their arrangements. Davis’ collection of blooms in her home garden occupy “at least” 50 hanging baskets she estimates and is so extensive that her husband claims it takes two hours to water.

“He’s probably exaggerating ” she says with a grin.

Since 1984 members have poured their time and energy not only into cultivating gardens but also the minds of fifth-graders through a special program with Wrightsville Beach School.

The first fifth-grade class of 23 students at the school that participated in the partnership titled it Rooty Rascals. The boys in that class did not want garden in the name of their club because they thought it sounded too girly and the name stuck. The group now meets with more than 65 students once a month to cover projects related to environmental consciousness and at the end of the academic year the club makes boutonnieres and corsages for the kids to wear proudly during their graduation ceremony.

The Rascals’ past projects include illustrating access-point signs posted at the beach that inform the public about littering and shorebird nesting habits.

“The Rooty Rascals learn they have to take care of where they live and continue the work of the people who lived here before them ” McNeil says adding that she sees the program as one of the garden club’s highest priorities in the future.

The students have wholeheartedly embraced the program going so far as to elect their own president vice president and secretary and submit drawings to be featured in their commemorative yearbook. This year’s Rooty Rascals will be responsible for creating table favors for the district-wide garden club meeting that will convene in Wilmington in October.

The program is near and dear to the hearts of many members some of them mothers who have had the opportunity to engage with their own Rooty Rascals and educate them about the environment. In fact several current members of the garden club are former Rooty Rascals themselves.

“We’ve had great guidance ” McNeil says. “It was those that came before us that laid the footsteps for us to follow.”

The club encourages a warm sense of family too. Mother-daughter pairings are a common sight during meetings and legacy membership is granted even to those who live on the Wilmington side of the drawbridge leading to Wrightsville Beach.

But as the former presidents gathered in Harbor Way Gardens clearly illustrate by constantly pointing out the accomplishments and talents of their fellow members while simultaneously poking innocent fun at one another the club itself is a family.

When Elise Running moved to Wrightsville Beach in 1987 she didn’t know a soul in town. She met Harbor Island Garden Club member Shelia McCuiston at the gym and still remembers that pivotal moment because it introduced her to a group of women that would be an integral part of her life.

“I’m so grateful for this group of women ” she says. “This truly is how I made friends.”

The women kick back at four socials a year including a Christmas luncheon with guests and an oyster roast where husbands are allowed to make an appearance.

“They don’t get to join often ” Running notes.

McNeil points at her fellow former presidents with laughter as she responds “There’s no lack of fun with these ladies!”

Later she speaks in a more serious tone when discussing the club’s legacy as it approaches its 65th anniversary year.

“We’ve had great guidance ” McNeil says. “It was those that came before us that laid the footsteps for us to follow.”