“Is this the real life? Is this just fantasy?”

With a huge kinetic sculpture garden as an artistic centerpiece, Wilson is a fun, whimsical place to while away a few hours 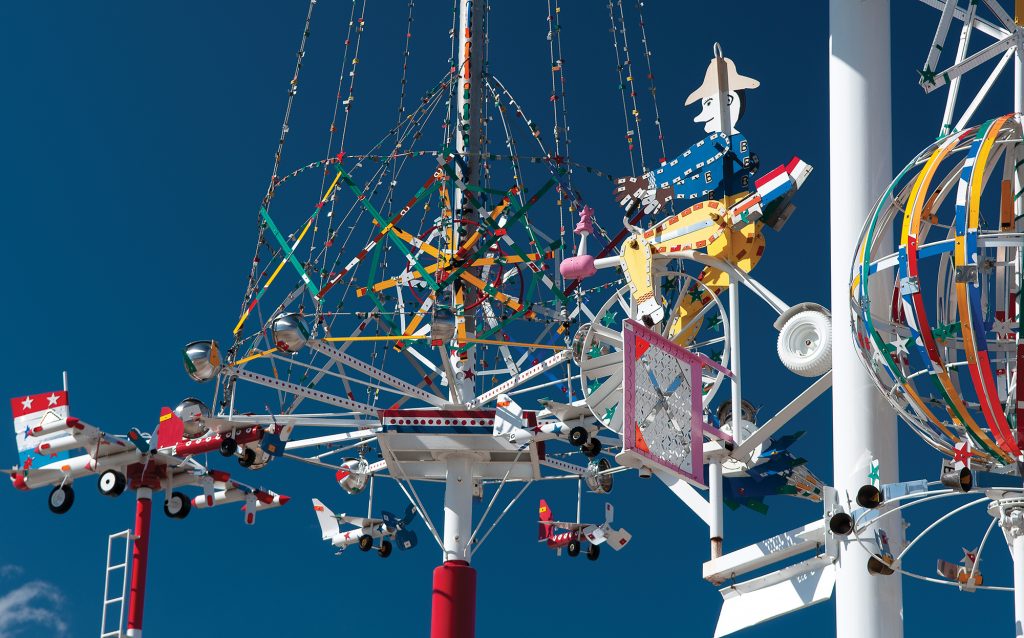 The famous lyrics from Queen’s “Bohemian Rhapsody” might immediately come to mind when viewing the whimsical sculptures that dominate the downtown skyline in Wilson, North Carolina. After viewing the approximately 30 sculptures — popularly called whirligigs — that make up the Vollis Simpson Whirligig Park, it definitely seems like a worthwhile question.

A more intriguing question might be what inspired the park’s namesake artist, Vollis Simpson.

Like many notables in the art world, Simpson didn’t receive notoriety or acclaim until after his death, in 2013. Before his retirement at the age of 65, he ran a business with a few of his friends repairing farm machinery. Simpson also had a side business moving houses, something he had learned from his father.

Moving houses without the aid of large industrial equipment required ingenuity, critical thinking, and the creative use of levers, fulcrums and rollers. Repairing farm equipment led to the collection of a variety of industrial supplies — eventually the perfect ingredients for an artistic recipe incorporating everything from HVAC fan blades, stovepipes and I-beams to bikes, mirrors, pipe, milkshake mixers and aluminum.

Understanding the life of an artist is a fun way to gain insight into their work. Apart from the visual aesthetics, the creative elements and themes at play in a work of art are almost always fascinating to learn about.

With that in mind, it’s worthwhile to point out Simpson’s service to his country in World War II. During a stint on the island of Saipan in the South Pacific, he developed a rudimentary windmill using discarded parts from a B-29 bomber to power a washing machine so he and his fellow troops could avoid washing their uniforms by hand.

Was this experience an inspiration? Probably, but one of the coolest aspects of Simpson’s art may be that he used a large amount of old road signs in his creations. This makes the sculptures highly reflective at night — a perfect backdrop for some of the concerts the city hosts in the amphitheater inside the park.

Taking advantage of the reflective nature of the whirligigs, the city is hosting a holiday drive-in laser and music show on the first Friday and Saturday of December. Tickets for the Electric Light Fantasy are $20 per carload and available by presale only.

It is easy to imagine that Simpson would approve of the integration of technology to showcase his work. The point is reinforced by the fact his art was relatively obscure until the rise of the Internet, which eventually led to him earning praise from high-profile outlets such as the “New York Times.”

The Vollis Simpson Whirligig Park has been an inspiration for cities across the nation.

Other places in the U.S. have noticed the success of the whirligig park as an engine to drive cultural and economic progress. The idea that Simpson’s art might have slipped into obscurity without assistance from the Internet has to at least be a partial explanation for why Wilson is working to rebrand itself as a hub of technology, creativity and innovation networking.

To support inclusion efforts and remote learning, the community offers a free Wi-Fi network, Greenlight Community Broadband, which includes 30 public access points, along with a flexible cellphone plan starting at $10/month. This is the backbone of the vision Wilson has adopted, based on this free fiber optic network that is available to college campuses, businesses, startups, and entrepreneurs.

Wilson is also in a strategic position at the crux of I-95 and the new I-795 corridor, making it a convenient place to stop if traveling northward. From Wilmington, it is a relatively stress- and traffic-free drive that only takes about 90 minutes. Wilson is also home to an Amtrak hub, which makes it possible to park there and travel to major cities such as Washington, D.C. and New York.

The sculpture park is just one reason to journey to Wilson

There’s a lot more to Wilson than whirligigs and trains. The city has always been known as a destination for BBQ enthusiasts, and spots like Parker’s Barbecue are definitely worth the trip. The food is delicious.

If you’re in the mood for a steak, specifically a rib eye, a visit to The Beefmastor Inn is in order. Plan ahead, because it’s a tiny place with only 10 tables. There are no reservations, so people tailgate in the parking lot to wait, a scene that has taken on a life of its own. Pro tip:  there is a Burger Boy nearby with inexpensive, quality food that is reminiscent of a 1950s-era diner experience. It is certainly a welcome sight if other restaurants are closed or too busy.

Wilson is also home to a botanical garden, a rose garden, the North Carolina Baseball Museum, the Oliver Nestus Freeman Round House, and a lake with a two-mile walking trail. Several local breweries and restaurants have also cropped up around the Vollis Simpson Whirligig Park.

Whether stopping on the way north, staying overnight, or making the decision to sit a spell and stay a while, Wilson has a lot to offer.