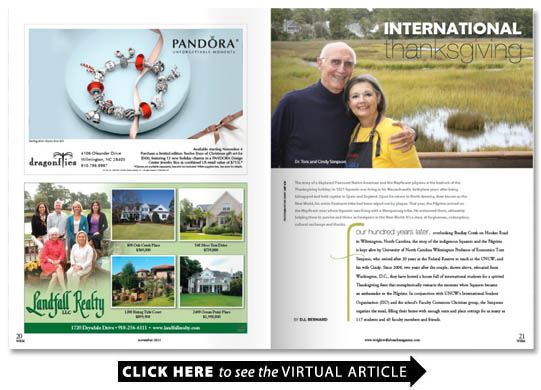 The story of a displaced Pawtuxet Native American and the Mayflower pilgrims is the bedrock of the Thanksgiving holiday: In 1621 Squanto was living in his Massachusetts birthplace years after being kidnapped and held captive in Spain and England. Upon his return to North America then known as the New World his entire Pawtuxet tribe had been wiped out by plague. That year the Pilgrims arrived on the Mayflower near where Squanto was living with a Wampanoag tribe. He welcomed them ultimately helping them to survive and thrive as foreigners in the New World. Its a story of forgiveness redemption cultural exchange and thanks.

Four hundred years later overlooking Bradley Creek on Hooker Road in Wilmington North Carolina the story of the indigenous Squanto and the Pilgrims is kept alive by University of North Carolina Wilmington Professor of Economics Tom Simpson who retired after 30 years at the Federal Reserve to teach at the UNCW and his wife Cindy. Since 2008 two years after the couple shown above relocated from Washington D.C. they have hosted a house full of international students for a spirited Thanksgiving feast that metaphorically reenacts the moment when Squanto became an ambassador to the Pilgrims. In conjunction with UNCW’s International Student Organization (ISO) and the school’s Faculty Commons Christian group the Simpsons organize the meal filling their home with enough seats and place settings for as many as 117 students and 49 faculty members and friends.

That was the count at last years dinner the biggest attendance ever Cindy Simpson says. Like the Pilgrims once crammed aboard the Mayflower the couple uses every inch of space to seat everyone at tables and chairs which they borrow from their church St. Andrews-Covenant Presbyterian on Market Street. In good weather the Simpsons seat guests outside on the deck but during inclement weather the homes three unfinished garages seat up to 80 people.

Theres so many moving parts to this operation but theres one master conductor here and thats Cindy says Tom Simpson.

Its so chaotic but it all comes together in the end Cindy says laughing. She plans the dinner with leaders of the ISO — from buying the food to whos sitting where. I love doing this its one of the highlights of my year adds Cindy who used to work as a human resource specialist for the Fairfax County Virginia school system.

Some dont believe its an actual sit-down dinner. With so many people everyone assumes its a buffet Cindy Simpson says. But the Simpsons are determined to make their home and the feast as hospitable as possible so foreign students can take home the good feelings that Americans associate with a shared home-cooked Thanksgiving meal. With help from students and neighbors they cook five 21-pound turkeys 80 pounds of potatoes and untold amounts of green beans for the old-fashioned American favorite green bean casserole. Of course theres stuffing cranberry sauce homemade bread and an entire table given over to Thanksgiving desserts like pumpkin pie pecan pie cakes cookies and even more sweets all made by students faculty and friends.

People are coming and going throughout the day bringing food helping to cook. It gets crazy and some say Im crazy to do it   Cindy says. But I cant stop smiling the whole day and evening. Everyones just so joyful and happy.

Thanksgiving is a time with family and of reflection and to be able to share that and give them an authentic American experience is what we value most about this celebration Tom Simpson says. During the six years of hosting the Thanksgiving meal the Simpsons house has had students from as many as 23 countries including Australia Saudi Arabia Chile China Ecuador France Germany India Japan Malaysia and Vietnam.

Even though the food is far superior to what they get in a dorm the students dont just come for the food. They come for the cultural experience.

All of us international students have been told in our respective countries about this unique American tradition says Anne-Laure Marny a 21-year-old exchange student from France who attended the 2012 dinner. I think we could all say it is the best first Thanksgiving well ever have she says. The Thanksgiving spirit gathered us as one big family. My parents and friends were really excited to hear about this typical American event.

Maxime Ueberschlag 21 also from France is studying finance at UNCW. So many people are willing to help everybody brings a good mood to the event and it ends up being like a personal Thanksgiving dinner even though theres almost 200 people there Ueberschlag says.

For many foreign students its rare to be invited into a professors home says Nivine Richie professor of finance at UNCW. Having this meal at the Simpsons instead of on campus makes it more significant she says. Like other members of the Faculty Commons group which helps organize the event Richie who was born in Egypt and speaks Arabic and English helps acclimate the students to the holiday and to the Simpson home specifically.

Last year Richie was able to speak with a husband and wife from Saudi Arabia who spoke no English. They really enjoyed finding someone else who spoke Arabic she says. Richie says she moved around a lot as a child. We never lived anywhere for more than two to three years. I was a bit of a nomad so I enjoy being a host for others she says.

In addition to decorating 23 tables and five dining rooms Ellis Furst a mural artist and friend of the Simpsons dresses up as the Statue of Liberty with a real light-up torch she says greeting each student at the door for a photo op. I feel so strongly that every visitor to our nation should have their picture taken with the Statue of Liberty that I put on my crown and gown and pose with every person that comes she says with a laugh.

The symbol of American immigration may mean more to Furst than to most people. In 1985 she was sailing from Tahiti to Hawaii. In the middle of the Pacific Ocean the boats satellite navigator broke and she was stranded for days.

I thought we would never make it — I know what the settlers felt like coming to America she says. Desperate weary and homesick she vowed if she ever got home she would change her name which was Cindy to Ellis in honor of Ellis Island and the immigrant experience and for all who have felt lost in a foreign place.

Now she pours those feelings of isolation into her role as decorator of the Simpsons international Thanksgiving fete. Furst has also channeled the story of Squanto illuminating his role as friend to the Pilgrims as the centerpiece of Thanksgivings meaning. Before dinner is served she stands on a chair and retells the Native Americans tale of helping the Pilgrims. I showcase him as the real hero of Thanksgiving she says.

Squanto is a beautiful story says Alice Marie Cadenat a UNCW exchange graduate from Marseille France. Cadenat attended two Thanksgiving dinners at the Simpsons as a member of the ISO. Squanto inspires you and makes you think about how you could help people to adapt to your culture she says. Thats what is great about being abroad. Its all about adaptation to a new country a new culture. And sometimes its great to get that help from local people.

Tom and Cindy Simpson appreciate Cadenats perspective having both lived abroad for extended periods Tom in China and Russia and Cindy in Greece. Taking on the symbolic role of Squanto for the Thanksgiving feast brings the roles of foreigners and hosts full circle. Were all helping each other and enjoying doing it Cindy says.

Last year one of the ISO leaders Baptiste Mermet arrived at the Simpsons house on the morning of the dinner and worked all day helping to cook the meal Cindy Simpson says. Baptiste never had time to change from his kitchen clothes and into his Sunday best for the dinner.

He was so wiped out afterwards but grinning from ear to ear Cindy Simpson says. Then he said I cant wait to do this next year.