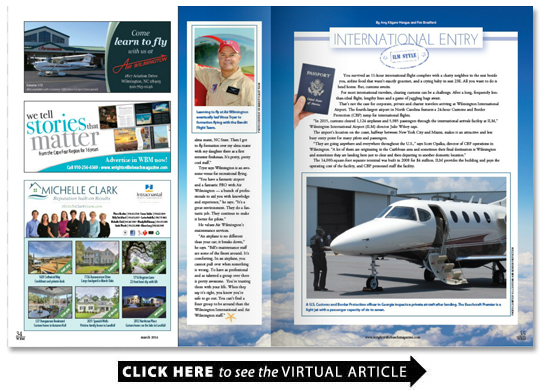 You survived an 11-hour international flight complete with a chatty neighbor in the seat beside you airline food that wasn’t exactly gourmet and a crying baby in seat 23E. All you want to do is head home. But customs awaits.

For most international travelers clearing customs can be a challenge. After a long frequently less-than-ideal flight lengthy lines and a game of juggling bags await.

That’s not the case for corporate private and charter travelers arriving at Wilmington International Airport. The fourth-largest airport in North Carolina features a 24-hour Customs and Border Protection (CBP) ramp for international flights.

The airport’s location on the coast halfway between New York City and Miami makes it an attractive and less busy entry point for many pilots and passengers.

“They are going anywhere and everywhere throughout the U.S. ” says Scott Opalka director of CBP operations in Wilmington. “A lot of them are originating in the Caribbean area and sometimes their final destination is Wilmington and sometimes they are landing here just to clear and then departing to another domestic location.”

The 14 000-square-foot separate terminal was built in 2008 for $4 million. ILM provides the building and pays the operating cost of the facility and CBP personnel staff the facility.

“It is staffed by the same group that clear the ships at the [marine] port ” Wilsey says. “They are a great group. They are used to dealing with those people who fly their own aircraft or have a corporate airplane so they are very customer-service oriented.”

Opalka can’t divulge his staffing levels but says that CBP provides permanent staff and services at the airport 24 hours a day seven days a week.

“The process to clear is very similar to one of the larger international airports say Atlanta or New York ” he says. “We have the same types of capabilities and facilities just on a smaller scale.”

Adjacent to the customs facility FBO (Fixed Base Operator) Air Wilmington provides services directly on the ramp ranging from fuel ground power units and baggage handling to payment for services and catering. Planes can be serviced on the ramp while passengers are clearing customs inside.

“The flights we process are international in origin but we don’t have any regularly recurring commercial airline service like an American Airlines or a Delta flight. We strictly handle what we call general aviation the private aircraft or a charter aircraft ” Opalka says.

“It is more of an ID card program but it is $100 for five years ” Wilsey says. “It allows you to bypass the customs window and then you use a kiosk machine before you clear customs.”

Travelers usually must go to Atlanta or Charlotte to be interviewed and approved for the card. CBP held mobile enrollment events in Wilmington in September and January.

“They set up three days of 15-20 minute appointments ” Wilsey says. “I didn’t know we had that many international travelers who would be willing to pay for that type of clearance but we have had over 350 people since last September apply for it and they were absolutely thrilled to get it right here in Wilmington and not have to travel to Atlanta or Charlotte. What a great service.”

All facilities at the airport are gearing up for an influx of corporate and private jets for the PGA tournament at Eagle Point Golf Club in Porters Neck scheduled for May 2017.

“Just think how great customs will be for the 2017 PGA event ” Wilsey says. “Some international players will fly their private jet or charter for the event. Also we expect some Canadian and other international VIPS to use the international facility for their travel. While the bulk of the spectators will fly into the domestic terminal the event will attract those who can afford the very best. Overall ILM plans to be the best first and last impression of Wilmington.”