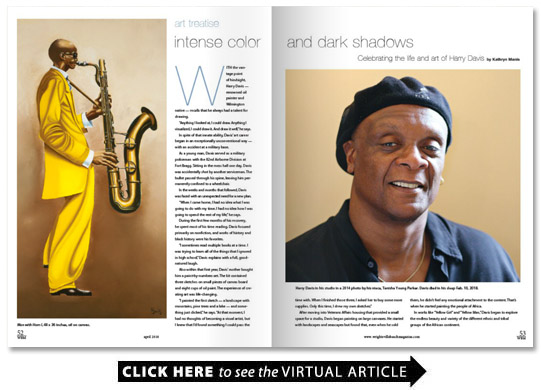 Harry Davis: 1949-2018. Wilmington native Harry Davis died in his sleep during the pre-dawn hours of Saturday Feb. 10 2018 a couple of weeks after granting an interview to Wrightsville Beach Magazine. We present this story as a tribute to the talented artist and his work.

With the vantage point of hindsight Harry Davis — renowned oil painter and Wilmington native — recalls that he always had a talent for drawing.

In spite of that innate ability Davis’ art career began in an exceptionally unconventional way — with an accident at a military base.

As a young man Davis served as a military policeman with the 82nd Airborne Division at Fort Bragg. Sitting in the mess hall one day Davis was accidentally shot by another serviceman. The bullet passed through his spine leaving him permanently confined to a wheelchair.

In the weeks and months that followed Davis was faced with an unexpected need for a new plan.

During the first few months of his recovery he spent most of his time reading. Davis focused primarily on nonfiction and works of history and black history were his favorites.

“I sometimes read multiple books at a time. I was trying to learn all of the things that I ignored in high school ” Davis explains with a full good-natured laugh.

Also within that first year Davis’ mother bought him a paint-by-numbers set. The kit contained three sketches on small pieces of canvas board and eight cups of oil paint. The experience of creating art was life-changing.

“I painted the first sketch — a landscape with mountains pine trees and a lake — and something just clicked ” he says. “At that moment I had no thoughts of becoming a visual artist but I knew that I’d found something I could pass the time with. When I finished those three I asked her to buy some more supplies. Only this time I drew my own sketches.”

After moving into Veterans Affairs housing that provided a small space for a studio Davis began painting on large canvases. He started with landscapes and seascapes but found that even when he sold them he didn’t feel any emotional attachment to the content. That’s when he started painting the people of Africa.

In works like “Yellow Girl” and “Yellow Man ” Davis began to explore the endless beauty and variety of the different ethnic and tribal groups of the African continent.

These large paintings on 36 x 36 and 30 x 30-inch canvases feature close-up images of a young girl and an old man. Their faces are covered in vibrant yellow paint which highlights the differences that time has wrought on their faces. The bright paint draws further attention to the old man’s beard which has gone completely grey and the furrow lines along his brow and cheeks. Where his eyes seem to narrow knowingly — his countenance level with the viewers seeming to read their faces as they take in his — the girl’s wide eyes look slightly up to meet the audience’s gaze. Her expression signals curiosity confidence and a twinge of defiance. On her youthful face the yellow paint enhances the smoothness of her skin absent of wrinkles.

Both of these images were inspired by old black-and-white Nikon ads that Davis found in an issue of National Geographic. He later developed the subjects’ body paint and jewelry from his own extensive research.

As his process developed searching for beautiful photographs became an essential first step.

“I used to go to the library to flip through stacks and stacks of National Geographic travel magazines and books on art and oil painting ” he says. “I was looking for a picture that would catch my eye that would make me say ‘Wow I need to paint that.’ Once I had a computer I could browse through hundreds of pictures even more easily.”

He looks for something very specific.

“I’m always looking for black-and-white images ” he says. “I don’t want to be influenced by someone else’s colors and black-and-white creates such deep beautiful shadows.”

Davis continued to paint portraits from the African continent from Zulu warriors to the Maasai people.

Along the way he discovered a passion and talent for the storytelling inherent to portraiture.

As his confidence grew Davis branched out with subject matter and ventured into variations on his emerging style. He never received any formal art training instead relying on experimentation as his education.

“Everything I’ve learned I’ve learned through trial and error and reading ” he says. “I just kept painting and every time I finished a painting I learned something new.”

In a series inspired by jazz and blues musicians Davis experimented with mood contrast and the extensive spectrum of style between naturalistic and abstract. The result is a series that looks very different from the rest of his work and reinforces the artist’s ability to imbue his subjects with an impressive vibrancy of character.

Among the portraits in this series are two of jazz pianist Thelonious Monk. Monk was known for his aggressive dissonant and atypical musical style eccentric performances and an iconic look that included wild combinations of hats suits and sunglasses.

In a painting titled “Monk ” Davis captures the musician’s cool bravado and unabashed intellectualism. He paints the pianist in profile his head tilted back and his lips parted slightly loosely holding a lit cigarette. The smoke billowing from the cigarette turns into a piano keyboard flowing from the artist’s mouth into the air and beyond the canvas.

Monk looks forward his eyes are tensed in thought and he wears one of his paradigmatic hats. Davis highlights the lines of the musician’s face with a primary color palette relying heavily on blue with small accents of green and red. A bright white provides shadow on the man’s face creating an intense contrast apropos of the musician’s legacy as an unconventional genius.

Davis says his jazz and blues pieces are intentionally quite different from his other work. They have an improvisational feeling echoing the nature of the music and musicians he depicts.

“My work is always full of intense colors and dark shadows ” he says. “These are more strictly in black whites and grays but with small splashes of bright colors; they actually have a jazz-like feel. They’re not realistic and they aren’t abstract but somewhere in the middle.”

Every image Davis makes from portraits of sharecroppers working in fields to members of Niger royalty is sensitive to the distinct personality and context of the subject. The artist’s degree in sociology and voracious appetite for reading about the lives of historical figures suggest that he finds the psyche and details of human experience compelling.

This interest is evident in the other paintings in the Jazz and Blues series.

In “Say it Loud ” a portrait of James Brown Davis channels the style of the 1970s. Captured on top of a geometric background of bold orangey browns and yellows the incomparable singer seems to glisten perhaps with a combination of sweat and stage lighting. Mid-performance he pulls the microphone close to his face and looks away from an imagined audience. The muscles of Brown’s arms ripple with effort and the tight position of his body gives an impression of reserved kinetic energy like a spring about to release.

In “Sir Duke ” Davis captures the acclaimed Duke Ellington in a quiet moment. The close-up view of the illustrious pianist and bandleader depicts him in regal profile. The lush combination of browns and near-purples that make up the Duke’s surroundings and silky suit jacket recall royal portraiture in both color and tone. Davis applies heavy-handed contrast with stark white and a warm yellow providing light to the piece and sumptuous dark shades for both the contemplative figure and the background that seems to sparkle and shift around him.

Others like “Dizzy” — depicting famous jazz trumpeter Dizzy Gillespie — and “Man with Horn I ” showcase the excitement and enthusiasm of this important distinctly American art form and the dynamic personalities behind it.

Davis’ paintings don’t merely depict his subjects. Beyond his exemplary skill Davis’ work is informed by nuanced knowledge of history and a zeal for life and the characters that inhabit it. Walking out of Davis’ Wilmington studio one has made several new friends and learned something important about the world we live in.