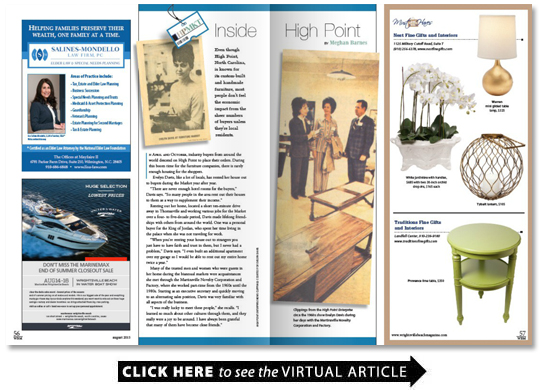 Even though High Point North Carolina is known for its custom-built and handmade furniture most people don’t feel the economic impact from the sheer numbers of buyers unless they’re local residents.

In April and October industry buyers from around the world descend on High Point to place their orders. During this boom time for the furniture companies there is rarely enough housing for the shoppers.

Evelyn Davis like a lot of locals has rented her house out to buyers during the Market year after year.

“There are never enough hotel rooms for the buyers ” Davis says. “So many people in the area rent out their houses to them as a way to supplement their income.”

Renting out her home located a short ten-minute drive away in Thomasville and working various jobs for the Market over a four- to five-decade period Davis made lifelong friendships with others from around the world. One was a personal buyer for the King of Jordan who spent her time living in the palace when she was not traveling for work.

“When you’re renting your house out to strangers you just have to have faith and trust in them but I never had a problem ” Davis says. “I even built an additional apartment over my garage so I would be able to rent out my entire home twice a year.”

Many of the trusted men and women who were guests in her home during the biannual markets were acquaintances she met through the Martinsville Novelty Corporation and Factory where she worked part-time from the 1960s until the 1980s. Starting as an executive secretary and quickly moving to an alternating sales position Davis was very familiar with all aspects of the business.

“I was really lucky to meet these people ” she recalls. “I learned so much about other cultures through them and they really were a joy to be around. I have always been grateful that many of them have become close friends.”