A Look at the Downtown Art Scene 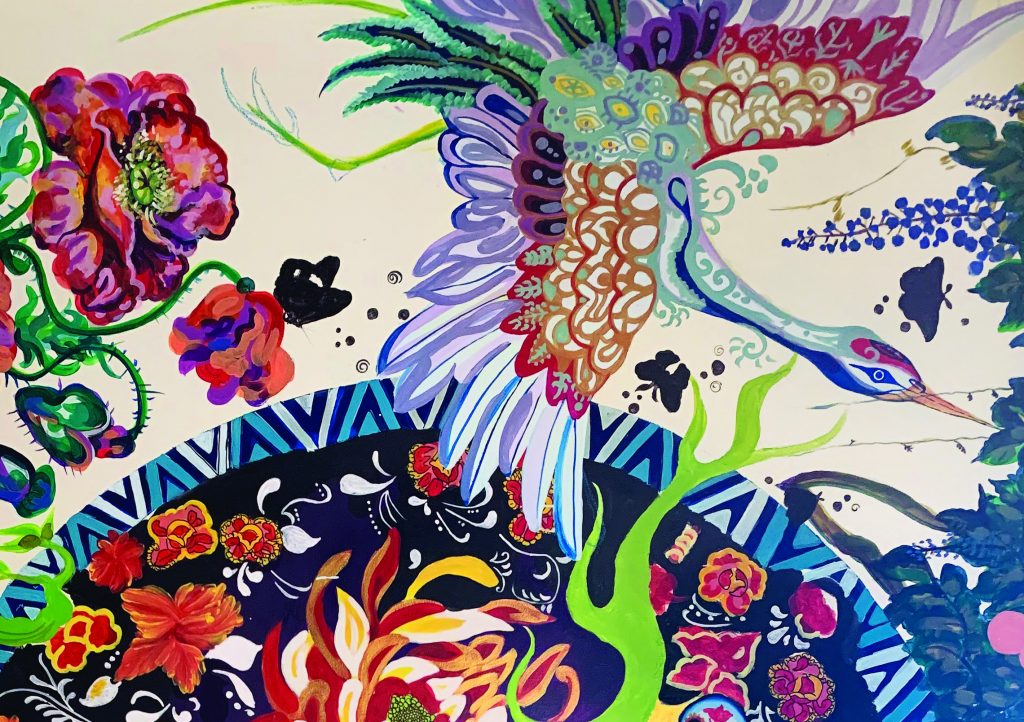 The Port City has a reputation for quality art. With a rich selection of natural scenery, fish and wildlife, and no shortage of interesting people, Wilmington is the perfect place for artists and art lovers seeking inspiration and relaxation.

Every October a new side of the Wilmington art world begins to show its colors as the Inktober movement grows in popularity.

Inktober began in 2009 when American artist, illustrator and animator Jake Parker challenged himself and others to create 31 ink drawings in 31 days.

It has since grown to thousands of participants. Every October, a surge of creative energy emanates from both novice and experienced artists around the world.

Nowhere is that felt more profoundly in Wilmington than downtown. The neighborhoods and communities by the Cape Fear River have a dense population of artists and creative-minded people adding a new dimension to the already established and diverse art scene.

The downtown community lives and breathes art. It seems like a new mural, sculpture, or public artwork pops up every other day. This bohemian tribe is pushing boundaries, creating new dimensions and flavors.

In a month already dripping with the ink of so many artists, October is the perfect time to highlight a few downtown artists.

Nathan Verwey’s art welcomes viewers into a delightful fever dream of color. His masterful eye for composition creates a world that could descend into chaos but instead is elegant and graceful.

His work is centered on the concept of kinetic energy, and his energy is nothing short of electric.

“No matter what you are creating, you are working with potential energy, kinetic energy,” Verwey says. “You are taking your energy and storing it in something else, and the viewer completes the circuit. That’s why people are drawn to certain artists; their energies just connect.”

Verwey experimented with several forms of art on his path to painting. He moved to Wilmington to act, spent some time writing, and focused on sculpture at the University of North Carolina Wilmington before leaning into street art. It’s that eclectic blend of styles that helps make his work both incredibly raw and scrupulously refined.

“It’s a natural progression of life,” he says. “If you are thirsty for knowledge then life is going to change you and move you.”

His paintings are like a wormhole through time colliding the past and present in an explosion of color. A close look reveals elements of ancient tribal aesthetics, byzantine iconography, classical portraiture, and graffiti art of the ’80s and ’90s.

“I’m in love with art history, so I try to mix different genres to blend this giant tapestry of the art timeline,” he says.

One of Verwey’s favorite sections of this timeline is the classic Hollywood era. Many of his paintings feature the faces of stars like Lauren Bacall or James Dean.

“I’m obsessed with the Golden Age of Hollywood and the way the men and women looked at that time,” he says. “They just don’t make them like that anymore.”

As a street artist, Verwey’s work can be found on canvases and on murals about town, which is an important part of his vocation as an artist.

“Street art showcases the interconnection between the man-made, nature, and the everyday hustle and bustle,” Verwey writes on his website. “You not only beautify your cities, but you enrich the lives of the people who live in them … you contribute to the energy spectrum that courses through the veins of existence and here, energy is king.”

Trevor Van Meter is a very busy guy. On top of working as a full-time graphic designer, animator, and illustrator, he also runs a downtown storefront on 2nd Street called Hey TVM Art and Apparel. Most of the art inside the store is Wilmington-inspired. Even his logo — a pineapple sprouting an eyeball — evokes the signature stone pineapples found on many of the exterior columns of historic downtown houses.

Like most of Van Meter’s works, the playful design of the gazing pineapple holds a deeper meaning. The pineapple represents paradise, and the implicit message behind the image is to never lose sight of what makes you truly happy, what lights your flame, and what gets you excited about life. His art finds a way to be playful and potent at the same time, and the simple designs usually carry an important reminder.

“You only get one life,”  Van Meter says, “so how are you burning it?”The ethos is echoed in his mission statement: “I’m on a mission to live a fully charged life filled with creativity, positivity, enthusiasm, and most important of all… fun fun fun FUN FUN FUN FUN FFFUUUNNN.”

His enthusiasm is genuine and infectious. When he starts talking about the projects that excite him it’s like talking to a little boy about what he wants for Christmas. His eyes light up and joy radiates from his face.

“Any time I’m in touch with the 8-year-old TVM who used to draw and create for himself, it’s always better art,” Van Meter says, “and 8-year-old me was drawing robot-pizza for sure. There’s something so pure about making something ridiculous.”

Wilmington serves as an inspiration, and he uses his art and ingenuity to give back to the community.

Van Meter has been using the shutdown as an excuse to work on a garden space. When complete, it will feature a putting green, seating for guests, kombucha tea, and a few surprises he has yet to unveil.

“It’ll be a downtown jam for sure, once I’m done with it,” Van Meter says with a childlike grin.

He also regularly produces animations and a steady flow of original art that can be found on Instagram.

The renaissance is alive and well in the work of Peta Wanliss. No detail is spared in her intricate renderings that blend the magical and the real into striking paintings that captivate the viewer. Every inch of Wanliss’s canvases is covered with ornate surprises.

At 23, Wanliss is at the beginning of what looks to be a very promising career. She has already established herself as a skilled painter, muralist, and comic book artist. She has no classical training, but it’s not evident from the work she creates. While her pieces often have magical themes, the paintings themselves are well-oiled machines, complex equations of composition, color, and linework. Her dedication to her craft serves as an example to her generation of just how far patience and hard work can get you.

Originally from Jamaica, Wanliss now lives in downtown Wilmington where she is heavily involved in the art and comic book community.

“My dream is to be a professional artist and to make a name for myself in the art world,” Wanliss said. “I would like to influence my generation to reach their fullest potential, but I know I have a long way to go.”

1 Make a drawing in ink (you can do a pencil under-drawing if you want).

You can do it daily, or go the half-marathon route and post every other day, or just do the 5K and post once a week. Whatever you decide, just be consistent with it. Inktober is about growing and improving and forming positive habits, so the more you’re consistent the better.

Optional: Go to the inktober website to see their official ‘prompt list’ to inspire your daily drawings.