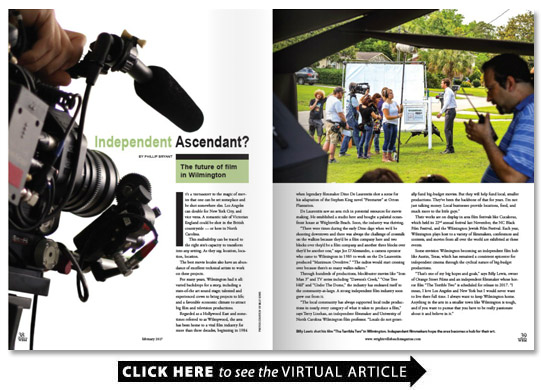 It’s a testament to the magic of movies that one can be set someplace and be shot somewhere else. Los Angeles can double for New York City and vice versa. A romantic tale of Victorian England could be shot in the British countryside — or here in North Carolina.

The best movie locales also have an abundance of excellent technical artists to work on these projects.

For many years Wilmington had it all: varied backdrops for a story including a state-of-the art sound stage; talented and experienced crews to bring projects to life; and a favorable economic climate to attract big film and television productions.

Regarded as a Hollywood East and sometimes referred to as Wilmywood the area has been home to a vital film industry for more than three decades beginning in 1984 when legendary filmmaker Dino De Laurentiis shot a scene for his adaptation of the Stephen King novel “Firestarter” at Orton Plantation.

De Laurentiis saw an area rich in potential resources for movie making. He established a studio here and bought a palatial oceanfront house at Wrightsville Beach. Soon the industry was thriving.

“There were times during the early Dino days when we’d be shooting downtown and there was always the challenge of crosstalk on the walkies because they’d be a film company here and two blocks over they’d be a film company and another three blocks over they’d be another one ” says Joe D’Alessandro a camera operator who came to Wilmington in 1985 to work on the De Laurentiis-produced “Maximum Overdrive.” “The radios would start crossing over because there’s so many walkie-talkies.”

Through hundreds of productions blockbuster movies like “Iron Man 3” and TV series including “Dawson’s Creek ” “One Tree Hill” and “Under The Dome ” the industry has endeared itself to the community-at-large. A strong independent film industry soon grew out from it.

“The local community has always supported local indie productions in nearly every category of what it takes to produce a film ” says Terry Linehan an independent filmmaker and University of North Carolina Wilmington film professor. “Locals do not generally fund big-budget movies. But they will help fund local smaller productions. They’ve been the backbone of that for years. I’m not just talking money. Local businesses provide locations food and much more to the little guys.”

Their works are on display in area film festivals like Cucalorus which held its 22nd annual festival last November the NC Black Film Festival and the Wilmington Jewish Film Festival. Each year Wilmington plays host to a variety of filmmakers conferences and contests and movies from all over the world are exhibited at these events.

Some envision Wilmington becoming an independent film hub like Austin Texas which has remained a consistent epicenter for independent cinema through the cyclical nature of big-budget productions.

“That’s one of my big hopes and goals ” says Billy Lewis owner of Orange Street Films and an independent filmmaker whose horror film “The Terrible Two” is scheduled for release in 2017. “I mean I love Los Angeles and New York but I would never want to live there full time. I always want to keep Wilmington home. Anything in the arts in a smaller town like Wilmington is tough and if you want to pursue that you have to be really passionate about it and believe in it.”

Independent films might be the future of the industry in Wilmington by default barring a reversal of the recent downturn imposed by changes in state legislature.

The Port City has been able to attract plenty of big productions over the past 30-plus years in part because of the numbers of professional crewmembers who came to work on a De Laurentiis production and decided to make it their home base.

“Outside filmmakers like staying here ” Johnny Griffin says. “When producers come to the area they say ‘Now I get it.’ Wilmington became known as a place that built and developed crew. At first 95 percent of the crew came from outside the state now 95 percent are from inside.”

Griffin is the director of the Wilmington Regional Film Commission an organization that helps market the area to outside productions and facilitates productions within. He knows about making Wilmington a home; Griffin was one of the crew that moved here to work with De Laurentiis in 1984.

Despite the past successes and the presence of talented crew the future is murky. For the past two years talk of the Cape Fear film industry has read like a pre-obituary for a business dying or dead.

Movie and TV production crews follow the money specifically the money available in grants and tax incentives. For a time North Carolina offered one of the more generous incentive programs a 25 percent refundable tax credit for in-state expenses. The program cited as a major factor in bringing high-profile projects like “Iron Man 3” and “Sleepy Hollow” to town expired in 2014.

The state implemented a grant program in 2015 that capped awards for all productions at $5 million and productions began to leave. “Sleepy Hollow” relocated to Georgia and “Secrets and Lies” — produced by Barbara D’Alessandro Joe’s wife when it filmed in Wilmington — moved to Los Angeles.

In September 2015 the N.C. General Assembly bumped the grant program to an annual maximum of $30 million for the next two fiscal years which helped bring the TNT series “Good Behavior” and History channel’s military drama “Six” to Wilmington. “Good Behavior” was picked up for a second season but there is nothing else on the horizon.

“It was implemented for two years ” Griffin says. “We’re in the second year of that cycle. There’s a project in Charlotte that should use $2 million to $3 million but nobody else has applied to use the money. The incentive program is less and the certainty is less. If you are doing a TV series and want to be here three to five years there’s only money for one season.”

North Carolina now lags well behind regional competitors like South Carolina and Georgia — which offers a 30 percent tax credit. Consequently projects that might once have filmed here have migrated south and west.

“Atlanta is a real phenomenon ” Barbara D’Alessandro says. “There’s always been a little bit of production going on in Atlanta. But once they put in their film program it’s just exploded.”

Most recently after the incentive battle was fought North Carolina passed House Bill 2 the Public Facilities Privacy & Security Act colloquially known as the Bathroom Bill. The bill restricts restroom use in government property to the gender assigned on an occupant’s birth certificate.

Since the bill’s passage some film productions have reconsidered or terminated their plans to engage in North Carolina including Lionsgate Studios who had previously planned a comedy series in Charlotte.

More than 400 film television and commercial projects have shot at EUE/Screen Gems in Wilmington but the second season of “Good Behavior” is the only major production definitely coming to shoot at the 50-acre sound stage lot. Bill Vassar the studio’s executive vice president says companies would apply for grant money and come back to town if the bill were repealed.

Can Wilmington’s film industry survive this downswing? Is it in decline or is it just in flux?

Griffin makes it clear however that a state of flux does not necessarily spell doom.

“The local crew is the strongest around ” he says. “Having two films schools [at UNCW and Cape Fear Community College] and a top-rated film festival will not in itself attract a production here but when [the producers] see it they realize film is very important to the town that it’s ingrained in the community.”

However many young filmmakers and technicians aren’t waiting for an upswing. Without deep roots in the area they are leaving at a rate much higher than industry veterans following the work.

“For younger people who are really the breath of life sometimes on film sets it might be a lot easier for them to move to Atlanta where sometimes they can just have their pick of shows versus sitting here waiting to work ” D’Alessandro says.

“I feel like making the jump to Atlanta was relatively easy for me to make right out of college because I hadn’t established ‘real-world’ roots in Wilmington yet ” she says.

The best hope to keep the industry alive in Wilmington might be indie films but they also face challenges. Only projects with production costs of at least $5 million qualify for the grant program so the small-budget independents can’t receive funding assistance from the state.

“The removal of the incentives has really hit the town hard ” says Tanya Fermin whose recent film “The Arrangements ” premiered at the NC Black Film Festival in Wilmington last September. “Most of my filmmaking friends and colleagues have had to take jobs in other industries or simply move away — which has made them less available to independent filmmakers. The independent filmmakers are trying to find their way.”

Still Lewis believes the area is primed to succeed.

“Why not Wilmington why not North Carolina?” he says. “You’ve got the mountains and the coast and everything in-between just like California.”

Any success of Wilmington’s independent industry is contingent upon the hard work of filmmakers and the support of the community but also reliant on a little bit of good fortune in the right situation.

“I really feel like it’s going to take a special project to put this area on the map ” Lewis says. “An independent film is going to have to get some national attention in order to really show the potential to investors and companies.”

Linehan agrees saying this has been a problem all area filmmakers have wrestled with.

“For years local producers and supporters of the film industry have wondered how they can turn Wilmington into the indie filmmaking capital of the U.S. ” he says. “The answer is to get a major funding source. We have everything we need right here to achieve our goal but we won’t get there without financing. There is no magic bullet to getting that. It takes talent perseverance luck — and a good script with national talent and distribution attached.”