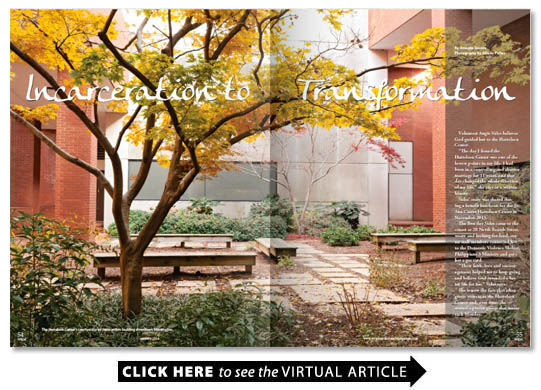 The day I found the Harrelson Center was one of the lowest points in my life. I had been in a controlling and abusive marriage for 11 years and that day changed the whole direction of my life she says in a written history.

Sides story was shared during a benefit luncheon for the Jo Ann Carter Harrelson Center in November 2013.

The first day Sides came to the center at 20 North Fourth Street weary and looking for food center staff members connected her to the Domestic Violence Shelter Philippians 3 Ministry and gave her a gas card.

Their faith love and encouragement helped me to keep going and believe God intended a better life for me Sides says.

She is now the face that often greets visitors to the Harrelson Center and over time she started a prayer group that meets each Monday.

Several of the nonprofit organizations that assisted Sides transformation along with others share the same address in the building that ironically once housed New Hanover Countys Law Enforcement Center and jail. The striking red brick post-modern structure anchors the corner of North Fourth and Market streets across from the county court house.

Marrio Jeter a former parole officer used to transport convicts from the New Hanover County Courthouse to the jail across the street via an underground tunnel. Jeter escorted jump-suited handcuffed men and women to begin serving their sentences in the buildings jail located on the top floors.

Jeter the program manager for Communities in Schools Cape Fear says hope is the spirit that rings through the halls of the Harrelson Center.

Designed by two architectural firms Hartman and Cox of Washington D.C. and Ballard McKim and Sawyer of Wilmington the building drew raised eyebrows and criticism from historic architecture purists when it was built in 1978 because of its bold appearance plunked down in the center of Wilmington.

After a one million dollar contribution from Wilmington developer Bobby Harrelson the adjacent First Baptist Church purchased the building from New Hanover County in 2005 and began renovating the building. The center which opened in September 2009 was rechristened the Jo Ann Carter Harrelson Center for Harrelsons late wife.

A small portion of the 66 868 square-foot building has been renovated for office space and meeting rooms for ten nonprofit organizations which pay below market rates. Renovations to the fourth floor are on the drawing board for 2014. The upper floors that once housed the mens and womens jail cells need total renovation. The demolition stage alone is estimated to cost several hundred thousand dollars says Harrelson Center director Vicki Dull who leads an informal tour of the vacant spaces.

Entering the fourth floor a placard beside the steel door still bears former Sheriff Sid Causeys name. Stepping around piles of debris and dodging hanging wires on the fourth and fifth floors Dull says the plan is to demolish the inner walls of former prisoner shower areas and cells because they are not load bearing walls clearing the space to offer more nonprofits an open floorplan with large windows overlooking downtown Wilmington.

Johnson is currently working from two crowded corner offices on the third floor.

Until we got this space though we couldnt target the local community Johnson says but here the local girls can come and its ideal for us. Were excited to expand to the fourth floor.

Since March 2013 A Safe Place has served 13 local trafficking victims also offering them donations of toiletries diapers formula and Walmart gift cards. The former visitation area on the fourth floor will provide Johnsons caseworkers with the privacy they need for meeting with clients Dull adds.

The goal of the Harrelson Center is to become a place to help people in the community who are working very hard to help themselves but they just cant make ends meet. Were trying to be that center to help people get connected to the resources they need she says.

The dream of the centers board of directors Dull says is full occupancy — a home for area nonprofits with an endowment so agencies can work there rent-free.

Though the memory of the buildings first 30 years and the controversial style of the structure located amid the hallowed landscape peppered with landmark churches historic courthouse and stately mansions is slow to fade from the publics sentiment its the humanitarian tale what the Harrelson Center has come to mean in downtown Wilmington during the years that will become the everlasting story of incarceration to transformation.

Some of the men and women who once served sentences inside the New Hanover County jail have returned to the center to receive clothing from the Philippians 3 Ministries or entered Phoenix Employment Ministrys program searching for a job.

In the centers lobby before Christmas a woman comes down the stairs apologizing profusely to William Peacock the centers janitor.

I have to say sorry for being short with you the other day. That wasnt right and Im sorry she says giving him a hug.

Peacock accepts her apology smiling. His story is also a part of the Harrelson Center.

He came to the center searching for work through Phoenix Employment Ministry. Finding a temporary job as a Salvation Army bell ringer last Christmas Peacock returned to Phoenix briefly in the spring to continue looking for work.

Peacock says he completed some temporary maintenance work for the center after the previous janitor left and Dull hired him for the job.

I must have done a good job because they couldnt praise me enough he says. Working here has made me feel real good oh yeah.

Dull says the centers nonprofits have become a family over time sharing resources and ideas.

Its not about handing out money but building relationships at the Harrelson Center Dull says.

The center serves as a central information bank bringing its nonprofits together for joint grants training opportunities and seasonal parties in the centers outdoor open courtyard Dull says.

That collaboration is possible because were all in this building says Communities in Schools grants manager Sue Tucker adding that the location works for them because its near downtown schools D.C. Virgo Preparatory Academy New Hanover High School and Williston Middle School.

The same has happened with Communities in Schools and Phoenix Employment Ministry.

Weve had a chance with Phoenix Employment Ministry where some of their clients have children that we also serve; so at night when the parents are at a Phoenix program their kids come here for after school Jeter adds. Its becoming this place where all the parts are working together.

When the Harrelson Centers staff realized there were gaps in either county or nonprofit services it created its own ministry to fill those voids. Angel Outreach Ministry has helped people in the Wilmington Drug Court program arrange transportation and helped homeless people acquire IDs so they could stay in a local shelter.

You never know how we may touch the peoples lives we may come in contact with here says Angel Ministries director Jennipher Love. The Harrelson Center is a haven for people that need that extra helping hand.

As the centers resident nonprofits rehabilitate the lives of their clients so too does the building they share lose its association with incarceration and continues to move toward transformation. Just one of the jail cells with bunks intact has been preserved as is to remind visitors of the buildings past Dull says. But otherwise all the steel bars that held lives in check have been cut away.

The building has transformed to a place of healing and hope.