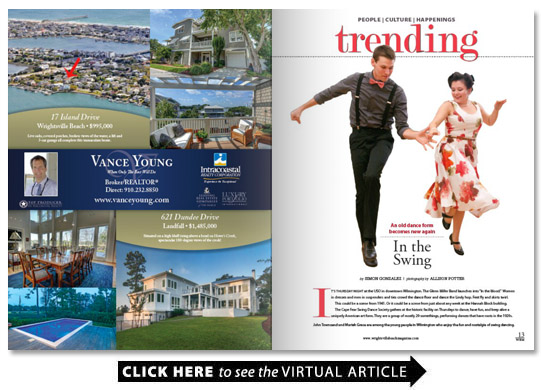 It’s Thursday night at the USO in downtown Wilmington. The Glenn Miller Band launches into “In the Mood.” Women in dresses and men in suspenders and ties crowd the dance floor and dance the Lindy hop. Feet fly and skirts twirl.

The Cape Fear Swing Dance Society gathers at the historic facility on Thursdays to dance have fun and keep alive a uniquely American art form. They are a group of mostly 20-somethings performing dances that have roots in the 1920s.

“This is a community where people come and have a good time but also learn about the history behind swing dancing ” Candi Terry says. “Swing dancing and jazz music is one of the few things that is historically American which I think is important. We’re such a young country. We don’t have a lot that’s ours. This is ours and it’s important to pass that on.”

Candi and her husband Stephen started the club — Stephen says it was about 80 percent Candi — when they discovered a swing dance desert after moving to Wilmington four years ago.

“There wasn’t much going on with that community so we said ‘Let’s just start something and see what happens ‘” she says.

The beginnings were modest. A couple of friends wanted to learn some steps for their wedding so Candi and Stephen taught them in their garage. Other friends found out about it and soon the garage was getting full. They needed a bigger space.

“We started using Hannah Block which I love ” Candi says. “I really wanted to meet here because of the historical aspect of it. An old USO building that put on all those great dances in the ’40s. I said ‘We have to be there. There’s no other place.'”

The club has about 40 active members. A handful of regulars have some gray hairs but the average age is about 25.

“We all know about the cyclical nature of fashion and of culture ” says Stephen who’s 29. “I’d guess it’s cycling back. Our parents didn’t do it but our parents’ parents did. It’s a very refreshing turn of pace for people our age that grew up watching over-sexualized music videos. I think swing dancing was kind of scandalous back in the day but modernly it’s not. We’re kind of done with that now so let’s go back to something that’s more G or PG-rated.”

The group is always looking for opportunities to dance. In addition to Thursday nights at the USO building they regularly travel to the Raleigh-Durham area where there is a large swing dance community. They seek out opportunities locally; many attended Lumina Daze to dance to the vintage sounds of the Wilmington Big Band.

“We definitely are geared toward the jazz/big band sound ” Candi says. “We follow the Wilmington Big Band as much as we can. Artistry in Jazz is another one we follow. But we also dance to the Phantom Playboys which is rockabilly. That’s a little on the fast side but it’s a lot of fun. We’ll do do-wop and Motown that’s a lot of fun to dance to. We’ve done some swing dancing at shag events which is interesting. They’ll say ‘You guys are looking good. That’s not shag but we’re all here to have a good time.’ They call us out a little bit but it’s all in good fun.”

Fun is a common theme when the swing dancers describe what draws them to the style.

“It’s the energy and the fun that is inherent in the dance ” John Townsend says. “I do a lot of styles but swing is my favorite. Waltz is fun but it’s more elegant and graceful and proper. Swing is just you get out there and feel the music and go for it.”

One of the group’s youngest members 20-year-old Mariah Grace is taking swing dancing to the University of North Carolina Wilmington by starting a club on campus.

“My generation doesn’t have a great way to socialize when it comes to dancing ” she says. “Yes there’s club dancing but not everybody is into that kind of thing or that scene. Partner dancing and doing swing is just good clean fun. It’s a great way to meet people and a good time.”

It’s also a great way to help keep the past alive. The biggest reason to participate is the pure enjoyment but many of the young people are also attracted to the retro aspect.

“I’ve always been fascinated with vintage things and things from the past especially the 1940s and ’50s ” Grace says. “I grew up watching old movies when I was little. When other kids were watching cartoons I was watching Ginger Rogers and Fred Astaire. I’ve always wanted to swing dance from seeing it in movies and learning about it.”

The most common step in swing is the Lindy hop a dance that emerged from Harlem circa 1926 and spread nationwide during the Big Band era of the ’30s and ’40s. The Lindy hop finds its origins in the Charleston popularized a couple of years earlier. All other styles — East Coast swing West Coast swing jitterbug — stem from that.

In keeping with the historic elements of the genre many swing dancers also dress in period clothing.

“Usually I’m in ’40s or ’50s garb or something vintage ” Grace says. “I love the era because it was the epitome of when ladies dressed like ladies. I just love that.”

In October the women dressed as flappers to attend the Gatsby-themed Deco Ball in Wilmington.