In Residence with Haywood Newkirk 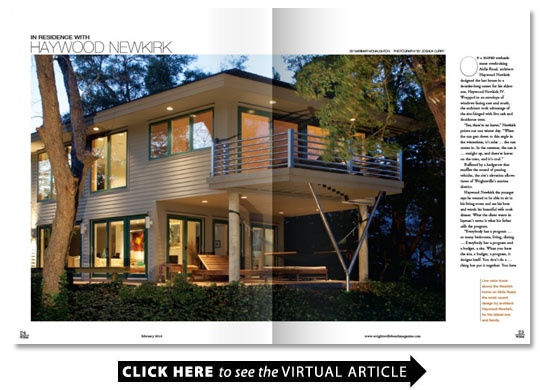 On a sloped embankment overlooking Airlie Road architect Haywood Newkirk designed the last house in a decades-long career for his eldest son Haywood Newkirk IV. Wrapped in an envelope of windows facing east and south the architect took advantage of the site fringed with live oak and deciduous trees.

See therere no leaves Newkirk points out one winter day. When the sun gets down to this angle in the wintertime its solar the sun comes in. In the summer the sun is straight up and therere leaves on the trees and its cool.

Buffered by a hedgerow that muffles the sound of passing vehicles the sites elevation allows views of Wrightsvilles marina district.

Haywood Newkirk the younger says he wanted to be able to sit in his living room and see his boat and watch his beautiful wife cook dinner. What the client wants in laymans terms is what his father calls the program.

Everybody has a program so many bedrooms living dining. Everybody has a program and a budget a site. When you have the site a budget a program it designs itself. You dont do a thing but put it together. You have climate orientation on and on and on; you put all these factors together. Its like a computer. You feed something into a computer and out pops a solution architect Newkirk explains making a complex problem sound so simple. It is he says if you dont allow some of it to become muddled with some owners infatuation with some stupid idea. And if you tell them its a stupid idea and ignore it its OK. But if you go along with some stupid idea youre gonna wind up with a stupid solution.

At his sons home all living is on the ground level. Bedrooms are upstairs including two for the Newkirk girls plus the master suite and adjoining deck cantilevered over an open porch and supported with concrete columns and stainless steel beams.

Even though you can see as far south as the Intracoastal Waterway from this point it is striking the balance between the limitless scale of the natural surroundings the orientation of the house on its site and crafting a livable human scale that is Newkirks hallmark.

A residence should be designed for the family for the group size he says.

A large oil painting hangs above the Airlie Road elevation. Painted by Zack Newkirks youngest son its unbridled energy rambles across the canvas. A more controlled painting by Newkirk is a contemporary landscape a golden orb on a dark field of color.

Newkirk currently lives on Wrightsvilles Sunset Avenue with his son Craig Newkirk who has drafted many of his fathers designs. When the architect isnt fishing Banks Channel or out in the Gulf Stream he is never too far away from a sketch pad and a pencil or a fresh canvas and paint brush.

I never could paint Newkirk says. I always wanted to. I did win first place in oils in college and been accepted in the North Carolina Artists Exhibition a few times and Irene Leache and painting of the year.

He won first prize in oils at Charlottes Mint Museum in 1959. Its not uncommon for an architect to also be a painter.

Youve got to be one or the other he says. If you want to paint paint.

Joe Cox and I had a two-man show in Wilmington down at Second and Orange he recalls one afternoon last month. He won the painting of the year contest that year Newkirk says. He did some of those fishermen paintings way before Claude saw them.

The telling of the story is inspired by a recent visit to the Figure Eight Island home of Rachel Camp a home Newkirk designed for her in the 1980s. Camp owns three large paintings by the late Claude Howell.

I said that? Newkirk asks. I know one thing. He sure knew what Joe Cox was doing.

Camps house is one of Newkirks favorites.

Its crisp white walls scored with oak beams and a juniper-clad ceiling are a perfect gallery for Camps love of primary colors displayed
in paintings textiles and fresh roses.

That was your inspiration Camp says.

Old Lumina Pavilion you had big space. Then you had the outside seating areas underneath a low ceiling on both sides. Both sides were open to different bodies of water Newkirk says.

Beams supporting the open interior space extend inside out where amply proportioned decks are buffered by wide overhanging second-floor balconies. Like the beams the balconies are also articulated inside by cantilevered third-floor balconies that hang beneath the 30-foot ceiling and look over the cavernous living area. The balconies perforate the loft creating Newkirks idiomatic human scale.

In this house you articulate the entire space of the house. All portions of the huge space plus the space from the decks come in the rooms the stairs. It webs itself in scale he says.

And so simple Camp adds. The views are extraordinary.

From the upper balcony it is possible to look into the east-facing bedrooms and see the ocean.

Ive got great views from every corner Camp says.

Standing at the balcony railing looking into the living area below Newkirk says This is where you understand the scale. You still feel comfortable. Its not out of scale. Theres a difference between scale and vacuousness. You gotta hit it just right.

Because the central part of the living area was so far away from its light source Newkirk added a skylight at the apex of the roof pitch. Clad in white juniper the gently sloped and vaulted ceiling is like an inverted ships hull.

Its kind of like sitting on a boat Newkirk says.

Its like a boat Camp chimes in agreement. From here you see the ocean; we used to be able to see the sound.

When you live directly on the ocean or a large body of water the climate is relatively different than an inland climate because the wind directions will change due to conditions that the water creates Newkirk says. When you design on the water you get very strong prevailing stormy wind directions that you have to account for.

On the east deck there is a compass rose routed into the floor reminding the owner and the architect of the homes orientation. From the open deck its possible to snuggle down on the south side protected from the north.

One thing about this exposure in the winter you can be out here because thats north and youre protected from the north wind. Orientation is very very important Camp says. And Haywood saw to it that this was how it is. Its like another room out here. Plus you get the shade from the sun.

You need that shade during portions of the year. In August that shade works out pretty well Newkirk says.

I wanted deep porches for protection Camp says protection from the wind and the sun.

On its low march across the winter sky the sun floods Camps living room where Haywood Newkirks sculpture is its centerpiece. The sculpture defines the open stair landing and divides it from the dining room.

Made in three massive pieces from marine aluminum the work is attached to a horizontal rod. When the doors are open it waves from side to side on a nylon bushing with the wind.

It has a life of its own when all these doors are open Newkirk says.