In Memory of the Girls in Dresses

In a story written before COVID-19 canceled the Azalea Festival, we take a look at what it took to outfit a Belle 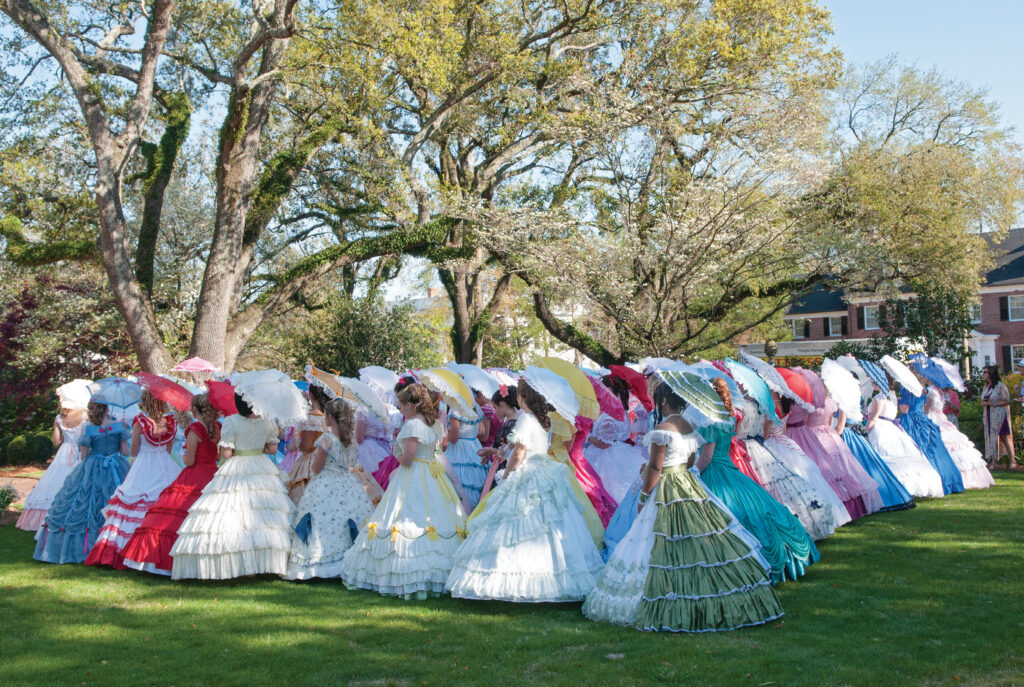 The Azalea Belles® gather on the Kenan House lawn for a group photo during the 2019 belle tea. WBM File Photo

For over 20 years Wrightsville Beach Magazine has featured Azalea week events and photos of girls in period dresses in its April issue. This feature and others were created for publication last April but was held when the 2020 Azalea Festival was canceled with the intention to publish it in 2021. No one could have foreseen the events that would consume our thoughts and change our world so drastically this last 14 months — including the ending of more than one time-honored tradition.

Visitors to the annual Cape Fear Garden Club Azalea Garden Tours of years past would find Azalea Belles® in each garden, at the ribbon-cutting and other events throughout the week, young women dressed in colorful period gowns with lace gloves and a dainty parasol.

Imagine the thrill of being 17 and showing off the fashions from 200 years ago.

We put a gown on them, and they just explode!” says Alma Fennell, who along with seamstresses Kay Godwin and Debbie Scheu made all the dresses and accessories worn by the girls over the years. “I have this monster-size mirror and they just cannot believe how they look. Their whole personality changes. They are not the same person as when they put that first gown on.”

The first impression Fennell would witness is shock. When the girls — high school juniors and seniors, most from New Hanover County — entered the showroom, or one of the seamstresses’ homes, there were racks and racks of gowns to choose from. They hardly knew where to begin.

“They (would) see hundreds of gowns on racks and they really didn’t know which way to go and that’s why I guide them,” Fennell says. “Some belles might be athletic, and some might be more girly, but you have to sort of feel how they are feeling. Most will ask for a recommendation. And because I’ve been doing these fittings for 35 years, I can look at a child, their complexion, height and build and know exactly what to put on them, and the color.”

About 98 to 99 percent of the time, the teen would pick the dress that Fennell first recommended, but they tried on as many of the period bell shaped dresses as they pleased.

The first step was to put the hoop on the belle so they could see how far the bars go out. Girls would exclaim they couldn’t walk in the hoop, but the fitters assured them before they left the fitting, they would be quite comfortable with the flow of the hoop, pantaloons, gown and all the accessories. In fact, part of the Azalea Belle® orientation was to show the girls how to move in the unfamiliar clothing.

After a belle said yes to the dress, the next step was selecting gloves, a parasol, pantaloons, a shawl — all the accessories that go with the gown.

“Oh, it is incredible how these girls change, their whole disposition, especially when you put these lace gloves on and I add ribbons that match the dress, their eyes just pop,” Fennell says. “It’s like these Disney characters where they have the Cinderella gown, it is the same thing, they are so cute and overwhelmed. It is a wonderful feeling when you see that child so happy, with the perfect dress.”

There were about 132 young women slated to portray belles in spring 2020 at the annual garden tour and at other North Carolina Azalea Festival events. They had hundreds of dresses to select from, each averaging 15 yards of material. Depending on the style, 60 or 70 yards of lace could also be used to adorn the dress and its accessories.

“I make the parasols to match the dress in the same material, and the girls just pop them open, and they strut around, it is so cute how they react,” Fennell says. “We do say when it is windy, don’t open them. They are so delicate, the frames could break in the wind.”

The girls would also go to the Little Boutique and pick out ballerina shoes to wear with the gowns. The duties included doing a lot of walking and standing on grass, which required flat, comfortable, inexpensive shoes.

A period-appropriate hairpiece was also part of the mandatory accessories.

“They wear the old fashioned, 1865-era, Gone with the Wind-style hairpiece,” Fennell says. “Some are clusters on top and there is a new style piece which hangs down with spiral curls. They look natural to me.”

She would often adorn the hairpiece with flowers to complement a girl’s outfit.

As for jewelry, a simple string of pearls and pearl earrings were the recommended norm. Fennell also loaned out some of her antique costume cameos in shades of blue and salmon.

Everything the Azalea Belles® borrowed was written out on a checklist for the return and to reclaim the small $25 deposit.

“I love making the gowns, and if I have no interruptions, I can make one in two days. But when they come back, I have to remove all the bars out of the hoops to wash them. The hoop gets most of the dirt and protects the dresses.  That is when the job really takes place,” Fennell says with a laugh.

Last year, the CFGC membership voted to end the wearing of antebellum (meaning before the war) gowns for girls on the garden tour, which has been canceled again this year as have several of the other events.

Azalea Belle® is a registered trademark of the Cape Fear Garden Club.