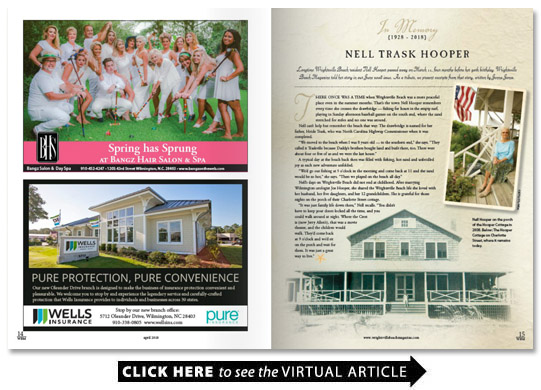 Longtime Wrightsville Beach resident Nell Hooper passed away on March 11 four months before her 90th birthday. Wrightsville Beach Magazine told her story in our June 2008 issue. As a tribute we present excerpts from that story written by Jenna Jones.

There once was a time when Wrightsville Beach was a more peaceful place even in the summer months. That’s the town Nell Hooper remembers every time she crosses the drawbridge — fishing for hours in the empty surf playing in Sunday afternoon baseball games on the south end where the sand stretched for miles and no one was around.

Nell can’t help but remember the beach that way. The drawbridge is named for her father Heide Trask who was North Carolina Highway Commissioner when it was completed.

“We moved to the beach when I was 8 years old — to the southern end ” she says. “They called it Traskville because Daddy’s brothers bought land and built there too. There were about four or five of us and we were the last house.”

A typical day at the beach back then was filled with fishing hot sand and unbridled joy as each new adventure unfolded.

“We’d go out fishing at 5 o’clock in the morning and come back at 11 and the sand would be so hot ” she says. “Then we played on the beach all day.”

Nell’s days on Wrightsville Beach did not end at childhood. After marrying Wilmington urologist Joe Hooper she shared the Wrightsville Beach life she loved with her husband her five daughters and her 12 grandchildren. She is grateful for those nights on the porch of their Charlotte Street cottage.

“It was just family life down there ” Nell recalls. “You didn’t have to keep your doors locked all the time and you could walk around at night. Where the Crest is (now Jerry Allen’s) that was a movie theater and the children would walk. They’d come back at 9 o’clock and we’d sit on the porch and wait for them. It was just a great way to live.”