In League With Spring

Celebrations! We all love them whether they are seasonal family traditions or spur of the moment events. WBM takes you behind the scenes as the Junior League of Wilmington hosts a luncheon in celebration of the publication of their newest cookbook Seaboard to Sideboard Entertains.

A buzz of excitement fills the air as a group of ladies from the Junior League of Wilmington gather at a cottage on Wrightsville Beach to celebrate one of the organizations largest fundraising projects of the year.

“Its been a huge undertaking ” admits current League president Dana ODonovan “but its great to see what our League members are capable of doing.”

“Whats so exciting about our second cookbook is that the theme is focused on entertaining which I think is very appropriate for the Wilmington area and especially the current membership of our League ” explains Jill Gunter co-chair of the Cookbook Committee. Each chapter of the new cookbook features a different theme reminiscent of the Cape Fear Region such as oyster roast garden party pig-pickin Fourth of July picnic and holiday traditions. There are also suggestions on how to dress what kind of table to set and even a sample invitation for each party.

“Were really trying to embody the Wilmington region and the wonderful events it has to offer ” says Elena Cazeault who helped co-chair the project. “Its a wonderful companion book to our first cookbook which featured the history of the Cape Fear region.”

Most of the 200 recipes for the new cookbook were submitted by Junior League members themselves. Tracie Meyers has the distinction of winning the contest for contributing the most recipes. Meyers says a lot of her contributions are family recipes she has collected over the years. “There are a lot of cooking women in my family including my mom and four sisters ” says Meyers. “We love to cook and entertain. Even my grandmother who is 88 still cooks.”

Other cooks in Meyers family include two uncles one of whom is the former editor of Cuisine Magazine. “I did include a couple of my favorite recipes from that magazine ” says Meyers “like the sweet potato orange cup and grilled pizza.”

While guests munch on hors doeuvres of blue crab and brie fondue and cucumber and watercress sandwiches Executive Chef James Bain is hard at work in the kitchen preparing other mouth-watering dishes from Seaboard to Sideboard Entertains. With effortless ease and a sprinkling of herbs he combines colors textures and patterns like an artist with results that might intimidate even the most experienced of cooks. “Not so!” protests Bain. “Most of the recipes are really very simple ones that the average cook can make at home.”

“Whats also great about all the recipes Im making today which of course are all in the new cookbook is that they were specifically chosen to showcase some of the great ingredients this area has to offer ” Bain says. “For example the strawberries for the salad and dessert can be purchased at Lewis Farms the fish from Motts Channel Seafood and several of the fresh herbs from Shelton Herb Farm.”

As the food is transferred to a beautifully decorated table including a centerpiece of roses pussy willows and snapdragons the Junior League ladies eagerly take their seats to sample more of the wonderful recipes from their new cookbook. The ladies active members as well as sustaining members (those with 10 years service or those over age 40) represent a rich history of the Leagues service in the Cape Fear Region.

Organized in 1923 as the Charity League of Wilmington the name was changed to the Social Service League in 1935. The group was later accepted as a member of the Association of Junior Leagues International in 1952.

The very first Junior League was founded in 1901 by Mary Harriman a 19-year-old New York City debutante with a social conscience. Moved by the suffering she saw around her Harriman mobilized a group of 80 young women hence the name “Junior” League to work at improving the squalid living conditions of immigrants on the Lower East Side of Manhattan.

Today there are 292 Junior Leagues throughout Canada Mexico the United Kingdom and the United States that are committed to promoting volunteerism developing the potential of women and improving the community through the effective action and leadership of trained volunteers.

The Wilmington chapter currently has nearly 500 members (both active and sustaining) who perform more than 10 000 hours of volunteer work each year. To date the League has invested more than a million dollars in the local community through numerous projects.

“More than 65 percent of our members are employed outside the home ” says League president ODonovan “and even though they are so busy with everything else in their lives they still make time to give back to the community.”

Beth Dixon who has been an active member for 10 years says her involvement has enriched her life in ways she never expected. “Theres a fulfillment that comes from knowing what we do helps so many children in our area. Like all volunteer endeavors the League brings out your best and shows you what youre made of. Sometimes you surprise yourself with what you can accomplish.”

The League is open to any woman in the greater Wilmington area. “Prospective members just need to fill out an application pay their dues and participate in the League for a year as a provisional member during which time they get to know all about us and our work ” says ODonovan. “New members also participate in a community project their first year.”

The Leagues four major ongoing community projects include: “Kids in the Kitchen ” designed to help address the issue of childhood obesity and poor nutrition; “Read to Me Festival ” which fosters a love of learning while providing free books for children; “Pied Piper Theatre ” an annual live theatre for elementary school children; and “Done-In-A-Day ” which provides short-term volunteer staffing to nonprofit community organizations.

“In order to support these projects the League relies on its various fundraisers including its cookbook sales its annual Bargain Sale (February) and the Holiday Market (October/November) ” says Jennifer Fletcher public relations chairperson. “On May 2 were introducing a brand new fundraiser: Mint Julep Jubilee. Its a Kentucky Derby Party to welcome spring. So grab your fanciest hat and come on out to Poplar Grove Plantation to eat barbecue stomp some divots and watch the race on big screens.”

“In this day and age of hard economic times we have to think outside the box ” says Lisa Bowling who will take over as president of the League in May. “Its going to take a lot more collaboration with other nonprofits to keep all our community projects going. But we have a group of very smart and dedicated women ladies from all backgrounds and ages and we look forward to having even a greater community impact in the coming year.”

Recipes from the Luncheon

Combine all ingredients in a glass pitcher. Refrigerate for 1 hour. To serve divide melon balls into glasses with 1 piece of lemongrass. Pour water and garnish with mint.

Place butter in sauce pot over medium heat. Cook butter stirring occasionally until it begins to brown and smell nutty. Remove from heat and strain. Combine vinegar and sugar in microwave-proof dish and microwave for 1 minute until sugar is dissolved. Combine brown butter vinegar mixture and salt to taste. Keep warm. 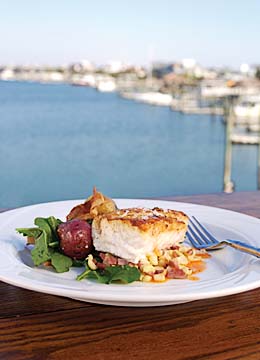 Preheat oven to 300 degrees. In oven-proof skillet heat oil on medium high. Season grouper and pat dry one more time. Place grouper in hot oil and sear for four minutes do not flip fish. Place skillet in oven and roast for approximately five minutes. Remove from oven and serve seared side up with corn and country ham saut and pepper jelly sauce.

Zest and juice from 1 lemon

Combine all ingredients (will keep in refrigerator for 1 month). 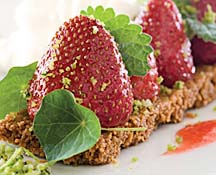 Preheat oven to 350 degrees. Roll strawberries in softened butter and then in sugar. Place top side down on cookie sheet. Cook in oven for approximately 10 minutes until strawberries are soft and begin to release their juices.

Preheat oven to 325 degrees. Combine all ingredients except second increment of butter. Mix until it forms dough. Flatten out on cookie sheet and bake until golden brown (approximately 20 minutes). Remove and let cool for four minutes. Crumble mixture into fine pieces and mix with remaining butter. Spread out again on cookie sheet and bake again for eight minutes just until cookies are set. Cut into desired shapes while warm. These cookies are VERY fragile. Put into refrigerator to harden if necessary.

Boil water and sugar for three minutes. Remove from heat and add mint. Chill for one hour. Remove mint from syrup and combine syrup with cream. Whip to soft peaks

To serve: Place cookies on dessert plates with strawberries and whipped cream. Pour juices from strawberries around dish and garnish with mint and lemon zest. 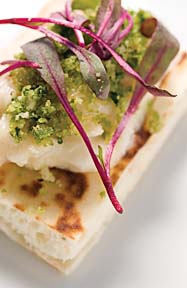 Zest and juice of one lemon

Preheat broiler to high. In a small saucepan reduce cream by half over medium-high heat. Add crab and simmer until warmed through. Gently fold in brie with some of the chives and season. Transfer mixture to a greased 8-ounce casserole dish and top with half of the Parmigiano and the bread crumbs. Add the remaining Parmigiano. Place under broiler for 25 to 30 seconds until surface turns golden brown. Serve with toast points. 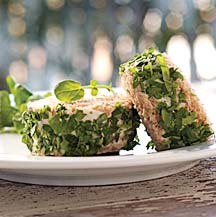 Using a 2-inch round cookie cutter cut two rounds out of each bread slice. Spread the cream cheese/cucumber mixture evenly on half of the bread slices. Top each with the remaining bread rounds.

Salt and black pepper to taste

Preheat the oven to 450 degrees. Cover a shallow baking pan with parchment paper and set aside. In a large bowl toss the asparagus spears with the herbs oil salt and pepper. Spread the spears on the baking pan in a single layer. Place in the oven and roast uncovered for approximately 10-12 minutes stirring once during roasting. Remove baking pan from the oven. Using tongs transfer the asparagus spears to a serving platter. 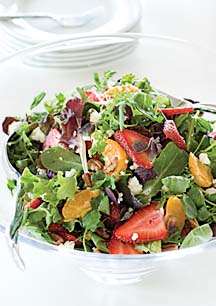 For the salad mix the greens strawberries grapes oranges dried cranberries feta nuts and carrots in a large salad bowl. For the dressing mix the olive oil sugar raspberry vinegar and celery salt in a sealed container and shake well. Pour over salad just before serving.

James Bain grew up in Wilmington and took his first job in the food industry at age 16 as a bus boy at Dockside Restaurant. “I guess Ive come full circle ” says Bain who after operating his own restaurant Harvest Moon for 10 years is now executive chef and the head of business operations at Dockside.

Bain says that one of his passions is browsing regional cookbooks such as the Junior Leagues and researching old recipes passed down through the generations. “I like taking classic regional recipes and updating them lightening them making them healthier and using more seasonal and sometimes different ingredients.”

Catering teaching private cooking classes and cooking for good causes are also high on his list of interests. “I feel honored ” Bain says “to have been chosen as the featured chef for the Leagues new cookbook Seaside to Sideboard Entertains.”