In Favor of Heirlooms

BY Randel A. Agrella 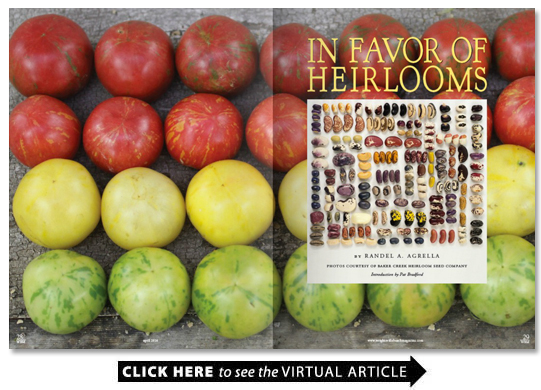 You see them for sale at farmers markets on restaurant menus and even now on Walmart’s shelves — heirloom vegetables with names like rat-tail radishes and Paris market carrots. These are vegetables grown from heirloom seeds with the most commonly eaten �­– the tomato.

But just what is an heirloom vegetable? An heirloom is anything treasured enough to be intentionally passed on to the next generation. Heirloom also implies a backstory of how the seeds were handed down from generation to generation.

No one single hard definition of an heirloom seed exists but a commonly accepted one is that an heirloom type must be an open-pollinated variety that has been in existence for at least 50 years.

“The seeds produced by open pollination will have the same characteristics as the parents. This is also referred to as true-to-type ” Marie Iannotti writes in “The Beginner’s Guide to Growing Heirloom Vegetables.”

“By contrast most modern seeds are hybrids (developed for commercial farming) crosses between plants that will not produce seeds that are true-to-type plants.”

The evolution of the food supply in a sick America has motivated an ever-increasing need to reconnect. Shopping at farmers markets dining at locally sourced restaurants and digging up backyards to grow crops are all increasing trends. So is planting heirloom seeds. — Pat Bradford

Heirloom seed types have been selected over many generations and most of the work — the first 10 000 years or so of it — was done by ordinary people who had no formal knowledge or understanding of biology. Instead they had a practical awareness of what constituted a superior plant form and saved seeds from those plants.

Decades of modern breeding in vegetable crops have yielded some useful varieties disease resistant and hardy but at a price: quality has been sacrificed to the producers’ convenience in harvesting and shipping. Too often crops have been bred for uniformity of size or to ripen all at once to facilitate mechanical harvesting or tough skins to allow the produce to withstand rough handling and shipping sometimes over thousands of miles.

Quality taste and even nutritional value have been the casualties of this trend.

Plant selection — choosing some individual plants and allowing them to breed then saving those seeds to plant again — always involves trade-offs since it is seldom possible to achieve exactly the perfect blend of all possible traits. Over time judicious selection for specific traits can profoundly alter the appearance of a plant population. Most agricultural crops have been subjected to so much selection that they are quite distinct from their original ancestors. Corn is the classic example but there are plenty of others.

Selection criteria can be any trait that is of interest to the grower/seed saver. Earliness fruit size and color are some typical examples.

Very often hybrid types are lacking real complexity and depth in their flavor since appearance and shippability are so much more important under a mass-marketing paradigm. Tenderness and fine texture have also often fallen by the wayside.

And increasingly studies are showing that the nutritional values in factory-farmed produce are actually lower. Protein content in corn is one example. Old-style open-pollinated field corn the type grown for feed or for milling into flour often contains almost twice as much protein as the new hybrids. Studies have also shown higher levels of copper iron and manganese in at least some open-pollinated varieties. Agribusiness is OK with that because the increased productivity may result in more protein per acre of crop grown but agribusiness standards seldom apply in the home garden.

Although heirlooms have the reputation for being finicky and not easily grown this really needn’t be the case.

Heirloom varieties are often the product of many generations of careful selection by farmers and gardeners who knew what they wanted from their plants. If a variety has been carefully nurtured and its seed kept by generations of a family or in a small geographic area it stands to reason that it must perform well in the conditions under which it has been preserved.

Many of these varieties have never been the subject of university studies so they may have no documented disease resistance but will quite probably possess some tolerance to the diseases and conditions prevailing in the area where they arose.

So with some attention to choosing varieties from a particular area or those that come from similar conditions it is quite possible to select varieties that will be very vigorous and productive in a home garden.

Heirloom vegetables represent a priceless legacy the product of centuries of work by countless generations of farmers around the globe. When we grow heirlooms we are the living link in a chain stretching back sometimes many hundreds of years. We are taking our turn in a succession of growers each generation of whom cherished their favorite crops and varieties and lovingly preserved fresh seed for coming seasons.

As the current custodians we are endowed with the opportunity to make our mark as well because like previous generations we maintain the varieties that we love the most. Heirloom seeds are our living legacy bequeathed to us from the past and passed on in turn to the future.

Gardeners often want to know the meaning of these terms that are frequently seen in seed catalogs.

Open-pollinated: Seeds are produced in a population where all the members are similar breeding freely by natural means. The genetic makeup of the parents is fairly uniform; their offspring are also uniform. There is still some breeding work being done of open-pollinated varieties including much work being done within the heirloom community and utilizing existing heirlooms to yield new open-pollinated types.

Hybrid: Two quite different parents often from highly inbred lines are crossed under controlled conditions. Since the offspring carry the genetic material from two different lines if their seed were to be saved the next generation reverts to something similar to the two parent lines which may be quite different from each other resulting in a lot of variation between members of the second generation. Many of the individual plants will be inferior to their parents.

Heirloom: Always open-pollinated usually at least 50 years old. They usually were developed by selection of those individual plants that showed some outstanding trait like earliness or large fruits. Farmers and gardeners would naturally save seed from their best plants to grow in the future. Heirlooms may have been the product of university breeding in the days before hybrids were preferred but often instead arose on an individual farm within a particular family or group of people who shared their seeds.

Genetically engineered crops or GMOs have had a portion of their natural genetic information artificially replaced by a snippet of genes from some other organism sometimes from a different kingdom such as animal or bacteria. This is initially performed in a laboratory setting and the process is entirely artificial — there is no natural process that is similar.

There are a number of concerns about genetically engineered crops. Some folks feel that there may be issues of food safety — that GMO ingredients may contain unique never-before-seen proteins that are not natural and that therefore may carry unintended health risks. These people feel that testing these foods for safety has been inadequate or even intentionally falsified to play down health concerns.

The other general issue is the fear that these artificially created life forms may have unintended impacts on the environment. Often cited are concerns that these crops may breed with wild populations and thus spread the “artificial” genes into such populations forever altering them and possibly creating harmful interactions with other life forms disrupting the natural ecology. There is even concern that the transplanted genes may not always stay put and may actually be taken up by other organisms.

These concerns have motivated 60 countries worldwide including Japan and all of the countries in the European Union to either restrict or entirely ban the cultivation production and sale of GMOs.

The main GMO types that have been released so far by agricultural giant Monsanto are mostly the “Roundup Ready” types that can endure a blast of the herbicide glyphosate which is then applied liberally over the crop. The immediate effect is weed suppression making these crops easier to grow. However the unintended outgrowth is that farmers are using the herbicides in far greater volumes than previously. This means more pollution in the soil water and air. And these same herbicides which were declared “safe” by government agencies decades ago are potentially now being used at unsafe levels with unknown risks to health. These herbicides may now be detected within human bodies. (Recent disclosure of high levels of glyphosate in breast milk are just one example.)

1. Slice a tomato in half and crush its pulp and seeds into a jar.

2. Wait for the pulp and seeds to ferment.

3. After three days the mixture will have a white film on top. Rinse and drain off the pulp. Seeds will sink to the bottom.

4. Rinse seeds with water repeatedly until the seeds are clean.

5. Spread seeds out to dry in a clean dry place with a gentle breeze.

Used with permission from the book The Heirloom Life Gardener.

The situation on heirloom flowers is a bit different. Modern breeders haven’t extensively worked with many old types and many old types either are or were until quite recently staples in the seed trade. In other words modern types never replaced them. Some examples:

Randel A. Agrella is the seed production manager at Baker Creek Heirloom Seed Company. Baker Creek offers 1 800 varieties of vegetables flowers and herbs — the largest selection of heirloom varieties in the United States.

Baker Creek carries one of the largest selections of seeds from the 19th century including many Asian and European varieties. The company has become an advocate to promote and preserve our agricultural and culinary heritage. The company supplies free seeds to many of the world’s poorest countries as well as here at home in school gardens and other educational projects.

Jere and Emilee Gettle are also the authors of The Heirloom Life Gardener.