If These Rugs Could Talk

Step into the steel and concrete Imperial Persian tent on Oleander Drive  known as the Gallery of Oriental Rugs  and meet Fereydoun Fred Nasseri proprietor diplomat in the regime of the former Shah of Iran and a fierce renowned keeper of this ancient tradition. With a smile and a gesture toward an inventory of some 6 000 rugs Nasseri stands in the center of his 18 000-square-foot gallery and showroom designed in the shape of a nomadic tent and summons the breadth of Oriental rug history with five words:  If these rugs could talk. 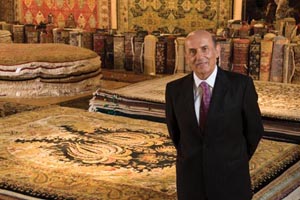 In a way they do just that. They speak an artistic language revealed in the fabrics dyes and designs; each with a tale to tell each with a connection to an ancient culture thats at the heart of Nasseris presence here in Wilmington.

What exactly is an Oriental rug? As defined in an informational brochure published by the Oriental Rug Retailers of America (ORRA) an Oriental rug is a “hand-woven or hand-knotted rug of natural fiber made in geographical areas that include the Near East Middle East Far East and the Balkans.” While elements of design vary greatly from region to region they share a commonality in the way they are made. They are either flat-woven or hand-knotted.

In flat-woven pileless rugs horizontal and vertical threads form both the rug itself and the design. Theyre thin rugs which are often used as wall hangings and would probably wave in a stiff breeze if run up a flagpole. In hand-knotted rugs strands of yarn are tied into the flat-woven fabric creating a pile and a pattern. These rugs are thick with yarn and could probably be slept upon with some degree of comfort.

Differentiating between flat-woven or hand-knotted types of Oriental rugs is simple. A quick look will do it. Determining the difference between a valuable rug and a not-so-valuable rug in either of the two types can be a little more difficult and demands consultation with a reputable dealer preferably one who like Nasseri is a Certified Rug Appraiser (CRA). 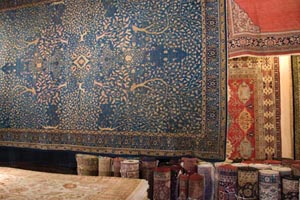 The most valuable Oriental rugs are generally antiques (100 years old or more) or semi-antiques (between 50 and 100 years old). Theyre scarce to begin with which accounts for part of their value and as the passage of time has “mellowed and enhanced their colors ” theyre beautiful as well.

One of the rugs on display in Nasseris Gallery of Oriental Rugs is such an antique. Woven nearly 200 years ago (approximately 1820) it once adorned the palace of the Shah of Iran.

“I bought it at auction at Sothebys (in London) for about $70 000 ” says Nasseri “It is actually worth a lot more than that.”

As time marches on though more and more countries with a long rug-making tradition are turning to less labor intensive industries making true Oriental rugs even scarcer and so even more valuable.

One factor that determines a rugs value is how tightly woven it is. “The more knots per square inch ” notes Nasseri “the more valuable the rug.” To get a sense of just what that means consider a six foot by nine foot rug with about 160 knots per square inch. Such a rug would take three weavers approximately four months to complete. Only one inch across the entire width of the rug will be completed in a day. Factor that into a rug with 800 knots per square inch and you can imagine the wage hours mounting not to mention the cost of the rug.

Details relating to the tribal ancestry of certain rug designs along with modern concerns about keeping them clean and repairing them are part of the cultural and educational vocabulary on the tip of Nasseris tongue when he talks to a customer.

“I feel these things when Im selling a rug ” he says. “I can imagine immediately the entire process; the little girl sitting in a corner weaving. When I talk to customers I can demonstrate that feeling and the culture that lies beneath it.”

It is a connection to his own culture that Nasseri lost and now re-embraces each time he steps into his own “tent” and its stunning gallery of Oriental art a connection he transmits with passion to every customer. 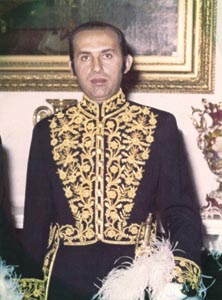 With a degree in law and a Ph.D. in economics Nasseri was once Irans Vice-Minister for Manpower Ministry of Labor and Social Affairs and part of a delegation to a U.S.-Iran Joint Commission for Economic Cooperation in 1976. Henry Kissinger as Secretary of State headed the American delegation along with the United States Ambassador to Iran at the time Richard Helms former director of the CIA. Nasseri would later become the head of Irans Central Budget Bureau and an advisor to the Queen of Iran.

Enter the Ayatollah Khomeini and the Islamic Revolution in January of 1979. At the age of 41 Nasseri was placed under arrest and became part of a political process designed to eliminate former supporters of the Shah and his regime. Detained by the army militia that came to get him Nasseri spent a month in a cell by himself where he was questioned daily: “Are you with the CIA?”

He was told that the minimum sentence he would likely receive would be execution and with an arguably foolish bravado that he remembers to this day he asked “What is the maximum?” which earned him a rap on the head with the butt of a gun.

Hundreds of friends and people hed known throughout his life were executed. Each day Nasseri joined a group of about 20 prisoners who were dragged into a courtroom where sentences were meted out. Fifteen or so of the 20 never returned to the cells. Nasseri could hear the sound of gunfire that signaled their demise.

“I went to that court 15 or 16 times ” he recalls. “Each time with the possibility that I will be executed.”

Miraculously after six months in jail he was allowed to post bail and with a “promise” to return he was released. With false identification papers he made his way across a desert to the border of Pakistan dodging the Taliban embroiled in pitched battles with the Russians at the time.

With the aid of the Pakistani government he flew to Germany and paid a visit to the American Embassy where with the knowledge and assistance of former Secretary of State Henry Kissinger and Senator Ted Kennedy (among others with whom he was associated during his tenure as an Iranian diplomat) he was provided with travel documents that allowed him to seek political asylum in the United States. He joined his wife Parvaneh and three children in Arkansas. They had been there since October 1978 four months before the revolution. 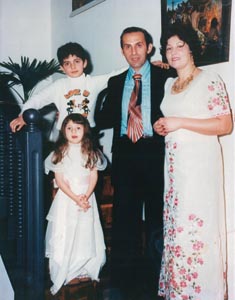 Parvaneh had not fled that revolution. She had traveled to Arkansas with her children to join a brother studying architecture there. Even as it became apparent that the Ayatollah Khomeini would become the new leader of Iran it was assumed that when the turmoil abated the family would return a plan that was abandoned after Nasseris arrest incarceration and flight eventually to the United States.

“I lost everything at the age of 42 ” he says “and had to start over with a wife and three children.”

Starting over began with a phone call from Houston where a friend offered him a job as a representative for a new ball valve factory being built in France. He accepted the position and remained with that company for four years until his relocation to Garden City New Jersey in 1986 where a family friend was running an Oriental rug business.

Nasseri became an apprentice and in 1988 he moved to Wilmington and opened a shop of his own on the corner of College and Oleander. Later he would add a shop on Front Street in Historic Downtown Wilmington and in 1993 another in Winter Park. In 1996 he began construction of his “Imperial Persian Tent” and centralized his operations to its location on Oleander in 1997.

By 1993 his business had been certified by the Oriental Rug Retailers of America (ORRA) and a year later he was recognized by Saint Johns Museum as an authority on the history and restoration of Oriental rugs. In May 1997 Nasseri passed an exam that earned him his title as a Certified Rug Appraiser. Ten years later the Gallery of Oriental Rugs won an award as the “#1 Rug Retailer in America” at the AmericasMart Trade Show in Atlanta Georgia.

With his education there were many directions that Nasseri could have taken as he began establishing his life as an American citizen. He chose one that in many ways has allowed him to embrace the culture and rich traditions of the country he was forced to leave behind. He brings to the sale of every rug he brings his passion for whats been lost. He shares the beauty and rich tradition of Oriental rug-making with every now-fellow countryman visitor to his “Imperial Palace Tent.”