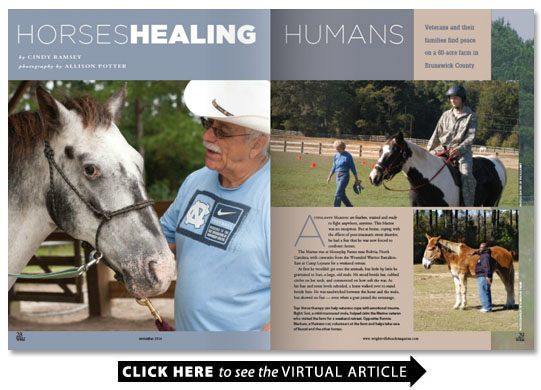 Active-duty Marines are fearless trained and ready to fight anywhere anytime. This Marine was no exception. But at home coping with the effects of post-traumatic stress disorder he had a fear that he was now forced to confront: horses.

The Marine was at Horseplay Farms near Bolivia North Carolina with comrades from the Wounded Warrior Battalion-East at Camp Lejeune for a weekend retreat.

At first he wouldn’t get near the animals but little by little he gravitated to Suri a large old mule. He stood beside her rubbed circles on her neck and commented on how soft she was. As his fear and stress levels subsided a horse walked over to stand beside him. He was sandwiched between the horse and the mule but showed no fear — even when a goat joined the entourage.

“I’ll never forget that ” Ruth Jenkins says of the quiet veteran. “He came with his wife and granddaughter. That weekend had a big impact on them.”

Ruth is the cofounder with her husband Phillip of Our Heroes a nonprofit organization designed to use the human-horse bond to facilitate healing and recuperation for active-duty and retired military and their families as well as disadvantaged and/or at-risk children.

Ruth lost eight close friends when American Airlines Flight 77 crashed into the Pentagon on September 11 2001. Phillip knew two people who boarded the plane at Washington Dulles that morning also tragically killed when the Los Angeles-bound flight was turned into an instrument of terrorism.

The Jenkinses are a military family. Ruth then a civilian employee of the Department of the Army was working at the Pentagon the day it was attacked. Phillip is a Vietnam veteran who served in the U.S. Army for 26 years. As the war on terror commenced they knew all too well the wounds it would create both physical and mental.

They were determined to help but how? In 2013 they purchased a 60-acre farm in Brunswick County and established Our Heroes an organization that combines their desire to help veterans with Ruth’s passion for horses.

While Phillip does not share Ruth’s boundless love of horses he does share her love of helping others especially veterans. He uses his broad knowledge base from his home-repair business to help keep the farm running.

“Being a Vietnam veteran he’s been through a lot ” Ruth says. “It is rewarding to him to see the kids and veterans interact with the horses.”

Horseplay Farms a for-profit farm and large animal rescue center is the physical location of the nonprofit. The long-range goal is to become self-sufficient through the services offered — boarding training lessons etc. — with anything extra directly funding Our Heroes.

“The purpose of the farm is to be the home of Our Heroes ” Ruth says. “The only profit goes directly to Our Heroes.”

Ruth was born and raised in Southport when it was far more country than town. She fondly remembers when she and her siblings would hop on their horses after church on Sunday and ride to their grandparents’ house.

“Our parents wouldn’t see us again until dark ” she says.

Ruth understood at an early age what scientific studies are supporting now: Horses can have profoundly positive effects on humans.

“I grew up poor in Brunswick County ” Ruth says. “I knew how much need there was for our veterans and for disabled and disadvantaged children. I knew the therapeutic benefit of horses and I wanted to help at home.”

Ruth is retired from her job with the Army but still works at the Pentagon as a consultant. She and Phillip live outside Washington D.C. near their grandchildren but they are investing time money miles and a lot of love in Brunswick County.

They make the drive from northern Virginia as often as they can and acknowledge the challenges of running the nonprofit from afar. But it’s worth it because of veterans like the young Marine who reluctantly visited the farm after it was recommended by a psychologist at Camp Lejeune.

“She finally summoned up the courage to come and see the farm ” Ruth says. “She thought she would stay a couple of hours. She stayed until 10 that night. She came back the next weekend. She started shadowing a trainer learning all about horses. She totally blossomed just from the therapeutic benefits of working with them.”

Horses’ calming effect comes as no surprise to the farm’s trainer Allie Sabo.

Allie who grew up with horses in New York came to Horseplay Farms from Texas in July. She holds a Professional Association of Therapeutic Horsemanship (PATH) International certification and is trained to provide Equine Assisted Learning (EAL) activities and Equine Assisted Psychotherapy (EAP) the latter with the assistance of a psychologist or therapist.

“People experience physical benefits from being around horses ” Allie explains.

Those who want more can also spend time riding which teaches an additional level of communication.

“EAL can help anyone who has suffered an emotional trauma ” Allie says. “This could be children victims of domestic violence or veterans. The connection with the horse helps them to open up and start reconnecting with their own emotions.”

In addition to leading therapeutic sessions giving riding lessons and performing countless other duties Allie evaluates each horse on the farm some having been donated to Our Heroes to determine which ones have the right temperament for therapy work. Once identified the chosen horses undergo extensive training to ensure safety and positive outcomes.

The encounter between the Marine and Suri the mule took place in November 2014 when members of the Wounded Warrior Battalion-East came to the farm. Most of the group events for warriors have taken place at Camp Lejeune. The staff would load up horses and travel to Jacksonville to spend time with veterans and their families holding horsemanship clinics and doing groundwork with the horses.

Now with a new trainer and a group of well-trained horses Ruth wants to transition everything to Horseplay Farms to meet the goal of serving Brunswick County and the region. The Our Heroes staff is working with the local Veterans Affairs clinic the American Legion and others to identify and serve veterans.

“Most of these guys get support when they are at Camp Lejeune and Fort Bragg ” Ruth says. “They don’t get as much support when they transition out. We have homeless veterans in Brunswick County and kids of veterans who are suffering from problems at home.”

Knowing that physical or psychological injury affects not just the veteran Ruth is adamant that Our Heroes serve the family as a whole. Sometimes the veteran might not participate but the children and/or spouse will.

“That’s why we want to include activities for the whole family ” Ruth says. “Veterans families of veterans their children and grandchildren can come participate.”

Child-specific programs include Santa at the Farm during the Christmas season and a junior horseman club that meets for three hours each week.

Sometimes an organized program isn’t needed. The solitude and peacefulness of the farm coupled with the human/horse connection is enough.

Ronnie Markum a 25-year Navy veteran who served in Vietnam spends at least a couple of days a week at the farm helping with everything from cutting brush to building fences. He also spends time with the horses.

“It just makes me feel good ” Ronnie says. “It definitely helps with stress and keeps me busy.”

Ronnie is no stranger to horses. He grew up on a farm in Texas and said he could ride a horse when he couldn’t even ride a bicycle. That knowledge proves to be handy in his volunteer role.

“A horse came in that hadn’t been ridden in over two years ” Ronnie explains. “I got on him and rode him a little and he did just fine.”

Ronnie is proud that Ruth gave him the honor of naming that horse. Now Rascal has become a favorite with the children and others who participate in the programs.

Other volunteers play a key role. Some like Ronnie are veterans themselves including Austin Foxworthy a four-year Marine veteran who served in Kuwait.

One ofthe most dedicated volunteers is a teenager who has personally experienced the challenges of a family deeply impacted by 9/11 and America’s war on terror. Time at the farm and with the horses has created a positive outlet for her in dealing with the stress and emotional trauma that have affected her family.

“It’s just so relaxing to be there ” Ruth says. “It’s amazing the difference. We’ve had numerous people make the comment about it being safe and quiet.”

Even the staff members benefit from the equine company.

Facilities manager Amos Combs lives on the farm maintains the grounds ensures the safety of the horses and people on the property builds structures fences in pastures and completes any other odd jobs that crop up. It’s not unusual to see him on the tractor in the pastures or just hanging out with the horses — even on what are supposed to be his days off.

“I enjoy being around horses ” Amos says. “They are my outlet for stress and help me relax. I enjoy their company and take pride in caring for them.”