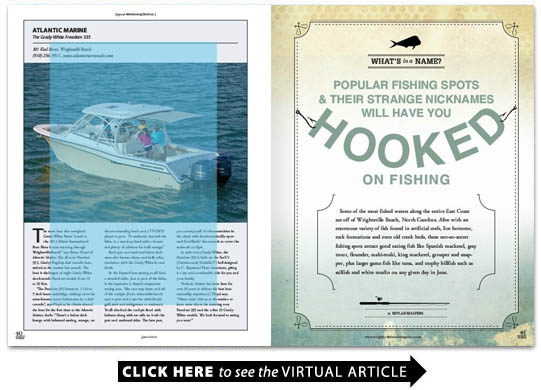 Some of the most fished waters along the entire East Coast are off of Wrightsville Beach North Carolina. Alive with an enormous variety of fish found in artificial reefs live bottoms rock formations and even old creek beds these not-so-secret fishing spots attract good eating fish like Spanish mackerel gray trout flounder mahi-mahi king mackerel grouper and snapper plus larger game fish like tuna and trophy billfish such as sailfish and white marlin on any given day in June.These top fishing spots are well known to local anglers but how they were named and what lies beneath the surface of the water is not. Some were named by fishermen ages ago; some were named for what was sunk at the location; and some are official names given by the state or the federal agencies that built the reef.

Manmade artificial reefs begin a few miles out and continue 15 miles offshore or more. There are also a large number of naturally occurring ledges and live bottoms as well as aging military wrecks and bombed freighters and boats from the World War II era.

Some of these locations are a highly kept secret known only to those who have searched and found them while venturing from one location to another. Other spots are well-known hideouts that normally hold a fish or two should your boat be the first one to arrive.

Johns Creek
Traveling south from Masonboro Inlet and lying about three quarters of the way to Carolina Beach Inlet with a depth of 25-30 feet is Johns Creek an old underwater creek bed that used to contribute to an old inlet located along the island. The area provides some excellent fishing for flounder Virginia mullet bluefish and gray trout. Between Johns Creek and the warm offshore Gulf Stream waters lies an exorbitant amount of live bottoms coral reefs and ledges which harbor safe locations for baitfish bringing in the larger fish to feed on them.

The Liberty Ship
GPS 34 10.467 / 077 45.067 AR-370
Sitting in approximately 50 feet of water The Liberty Ship is an artificial reef comprised of a few ships barges old tires and concrete. Located just three and a half miles out at a 100-degree heading from the mouth of Masonboro Inlet this reef is often a starting point for anglers wishing to stay close to the beach. On calm and clear days if the fish are biting beachgoers can witness the large flotilla of boats fishing the reef for king and Spanish mackerel bluefish cobia and a variety of bottom-feeding fish. This reef is comprised of the 110-foot tug Firefighter sunk in 1970. The 440-foot Liberty Ship Alexander Ramsey was placed there in 1974. In December 1982 a 120-foot tug Socony 8 was added to the site. Another 105-foot tug The Stone Brothers was sunk there in 1983.

When the water is clear anglers can visibly see the outline of the Liberty Ship in the depths below. The wreck is still somewhat intact providing structure that brings in the smaller baitfish which in turn brings in the larger predators. Divers seeking only shallow water dives also use this location. AR-370 is sometimes called The Tug.

Five-Mile Boxcars
GPS 34 06.217 / 077 44.950 AR 372
Approximately five miles from the inlet at a 154-degree heading as the name suggests this reef was originally built with 10 railroad boxcars in 1986. A couple of large 220-foot barges were sunk there in 1990. One hundred twenty-eight reef balls were dropped around the location in 2001. At a depth of 48 feet king mackerel Spanish mackerel barracuda cobia and assorted bottom dwellers like flounder and black sea bass are hooked here.

Ten-Mile Boxcars
GPS 34 03.283 / 077 39.633 AR 376
About 10 miles from the inlet at a heading of 142 degrees and about 10 miles from Masonboro Inlet this reef was also started with 10 railroad boxcars sunk in 1986. Concrete chunks were added in 1992 and 1997. The average depth is around 60 feet. King mackerel Spanish mackerel black sea bass barracuda cobia and assorted bottom dwellers like flounder are found here as well as the occassional mahi-mahi sailfish and amberjack.

The Dredge Wreck
GPS 33 58.583 / 077 41.283 AR 382
Approximately 10-and-a-half miles from the Carolina Inlet sea buoy the centerpiece of this reef is the 800-ton dredge Playa which was being towed from dry dock in Wilmington to Morehead City when it began to sink unexplainably on February 5 1931. The 24 crewman were rescued by the tug boat Barrenfolk but because it was a navigational hazard the U.S. Coast Guard sank the barge about six weeks later in 65 feet of water. Additional vessels were added to the reef in 1985 including the 105-foot tug Pocahontas and the 86-foot tug The R.R. Stone which lies upright. One hundred reef balls were added in 2001. Look for black sea bass king mackerel Spanish mackerel barracuda cobia mahi-mahi sailfish amberjack and flounder.

The School House
33 57.517 / 077 33.450 AR 386
Less than 18 miles from the Masonboro Inlet sea buoy at depths of around 80 feet this reef was begun in 1986 with 10 boxcars. Sunk in 1987 the School House formally known as The Alton Lennon was a 150-foot barge used by the Cape Fear Community College Oceanic Laboratory. Additions to the reef include a 215-foot World War II hopper dredge The Hyde sunk in 1988. A 300-foot Great Lakes hopper dredge The Markham was sunk in 1995. Theres a good chance of finding mahi-mahi and sailfish sometimes grouper snapper and black sea bass and occasionally king mackerel Spanish mackerel barracuda cobia amberjack and flounder.

23-Mile Rock
Twenty three-Mile Rock is a large ledge system found around 23 miles offshore in 85 to 100 feet of water. The ledges cover ample ground allowing more than one angler to reap the benefits of what it has to offer. From bottom fish such as snapper and grouper to king mackerel mahi-mahi and sailfish this area can be a smorgasbord of fishing action. Unfortunately it is in high demand and fishing pressure can be intense especially on weekends so get there early if you dont like fishing in a parking lot.

John D. Gill
GPS 33 52.350/77 29.010 WR 4
Lying just offshore around 24 miles out in around 90 feet of water is the wreck of the steel tanker 523-foot John D. Gill torpedoed by a German U-boat in 1942. It used to be a monster wreck split into two pieces covering a great deal of seafloor but the elements have taken a big toll on the structure. The wreck provides substantial cover for small fish and makes this a great place to wet a line for offshore-bound boats.

Frying Pan
GPS 33.801 111/77.946 944
The Capt. Greg MicKey a rechristened 180-foot menhaden boat was sunk on August 4 2007 44 miles offshore within sight of Frying Pan Shoals Light Tower. MicKey was a well-known local diver lost at sea in 2005. The wreck lies within sight of the Frying Pan Shoals Light Tower. The tower platform sits on four 80-foot steel legs. The tower extends 40 feet above water and 40 feet below to the floor of the Atlantic Ocean. This adapted Gulf Coast oil drilling platform known as a Texas Tower one of seven erected and placed into service was built in Louisiana and brought by barge to Frying Pan Shoals in 1966. When its crew was removed in 1979 it emitted an automatic beacon until it was replaced in November 2003 by a 3-meter discus buoy located approximately 8.22 nautical miles west-southwest of Frying Pan Shoals Light Tower. The tower accessible by helicopter and boat has been refurbished and opperates as a bed-and-breakfast inn.

The Steeples
GPS 33 13.647/77 15.456
Sitting just over 60 miles off the beach in the Gulf Stream one of the better-known fishing spots is called The Steeples. Ranging from approximately 450 feet on the backside to 250 feet on the shallow side these rock formations come to a peak just like a church steeple. The upwelling and turbulence created by the current of the Gulf Stream provides a massive feeding area for the smaller baitfish which have also grown up in the safe shelter attracting and providing an easy meal for the larger fish. Here you can find tuna both blackfin and yellowfin larger-sized mahi-mahi wahoo sailfish white marlin and if you are real fortunate maybe a shot at a blue marlin.

Whether you are a nearshore-type person who doesnt like to venture too far from the inlet and just wants to fish and enjoys being out on the water or an offshore-type angler who enjoys the long ride to get to the fishing grounds and wants a chance to hook a monster fish even if it takes all day to reel it in there are more locations available in our area to fish than anyone could dream of. And if fishing the standard well-known reefs and structures is not your cup of tea then head out and find your own.

You may very well discover a spot that no one has found or named. Itll be yours to brand for fishermen forever to remember.