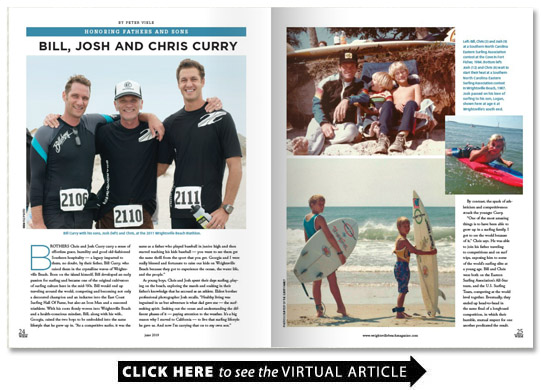 Brothers Chris and Josh Curry carry a sense of effortless grace humility and good old-fashioned Southern hospitality — a legacy imparted to them no doubt by their father Bill Curry who raised them in the crystalline waves of Wrightsville Beach. Born on the island himself Bill developed an early passion for surfing and became one of the original cultivators of surfing culture here in the mid-’60s. Bill would end up traveling around the world competing and becoming not only a decorated champion and an inductee into the East Coast Surfing Hall Of Fame but also an Iron Man and a seasoned triathlete. With his roots firmly woven into Wrightsville Beach and a health-conscious mindset Bill along with his wife Georgia raised the two boys to be embedded into the same lifestyle that he grew up in. “As a competitive surfer it was the same as a father who played baseball in junior high and then started teaching his kids baseball — you want to see them get the same thrill from the sport that you get. Georgia and I were really blessed and fortunate to raise our kids on Wrightsville Beach because they got to experience the ocean the water life and the people.”

As young boys Chris and Josh spent their days surfing playing on the beach exploring the marsh and soaking in their father’s knowledge that he accrued as an athlete. Eldest brother professional photographer Josh recalls “Healthy living was ingrained in us but adventure is what dad gave me — the surf-seeking spirit. Seeking out the ocean and understanding the different phases of it — paying attention to the weather. It’s a big reason why I moved to California — to live that surfing lifestyle he gave us. And now I’m carrying that on to my own son.”

By contrast the spark of athleticism and competitiveness struck the younger Curry.

“One of the most amazing things is to have been able to grow up in a surfing family. I got to see the world because of it ” Chris says. He was able to join his father traveling to competitions and on surf trips exposing him to some of the world’s surfing elite at a young age. Bill and Chris were both on the Eastern Surfing Association’s All-Star team and the U.S. Surfing Team competing at the world level together. Eventually they ended up head-to-head in the same final of a longboard competition in which their humble mutual respect for one another predicated the result. Both wanting to concede to one another Chris remembers “I knew it was a long ride home in the truck if I won — he won of course — but really we never had any underlying competition. He was always encouraging me and I was always trying to absorb how much experience he had.”

Every day the beach is full of athletic active health-minded runners cyclists swimmers paddlers sailors and surfers taking advantage of the same idyllic setting that Bill Josh and Chris grew up in. This atmosphere aided Chris in his decision to return to his hometown recently. In part by being inspired by his father’s wisdom on health and wellness coupled with his own astute knowledge of sports nutrition he opened a health-food restaurant in Roberts Adapt Kitchen. He hopes to channel the same passion he has for healthy athletic living and the surf and paddle lifestyle to the next generation.

Bill says “We tried to raise our kids to be independent — to let them be themselves — and they have taken care of themselves. But for me that was really cool to be able to raise my children up in the surfing culture.”