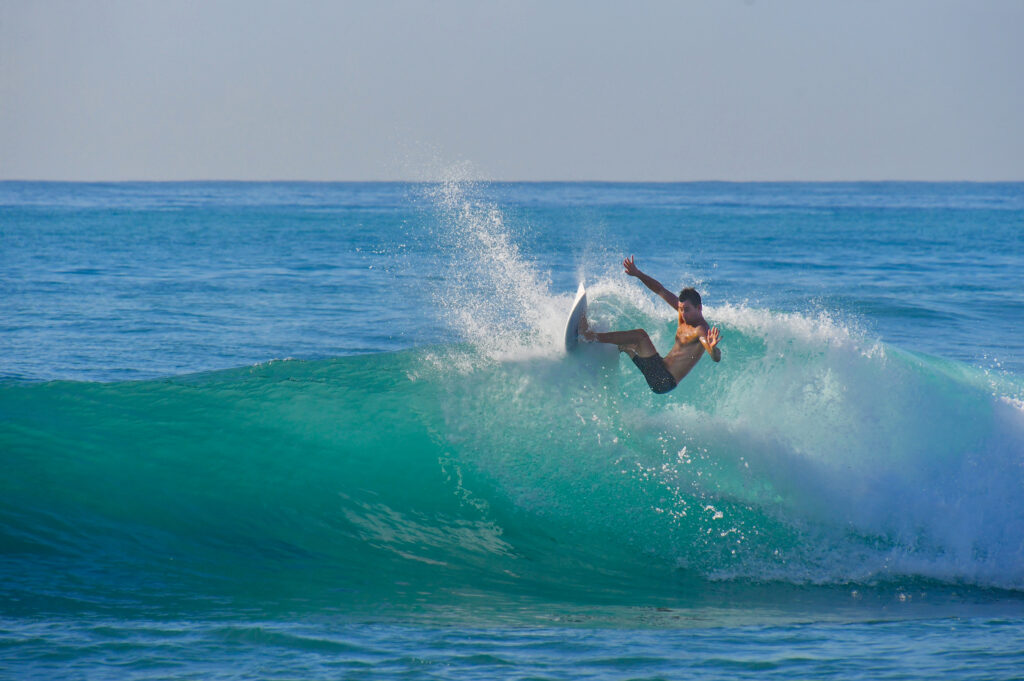 Ben Bourgeois has spent much of his life traveling the world as a professional surfer. His numerous accolades, competitive acumen, Waves for Water philanthropy, and international surfing fame have earned him a well-deserved legendary status in his hometown of Wrightsville Beach.

As of late, the East Coast Surfing Hall of Fame inductee had been enjoying continued travels and opening a surf resort in the Dominican Republic. Then, seemingly out of the deep ocean blue, Bourgeois was tapped to be the head coach for the Jamaican Surf Team. He has coached the team in one international competition and is trying to make sure Jamaica is represented on the sport’s grand entrance into the Olympic Games, now scheduled for July 23 – August 8 in Japan. Surfing events will take place July 25 – August 1 at Tsurigasaki Beach, 62 miles from Tokyo.

Bourgeois first traveled to Jamaica in the late ‘90s on a Surfer Magazine photo trip with other pros, and it became one of his favorite destinations. Bourgeois formed a bond with Jamaican surfing patriarch Billy Wilmot.

“Ever since that first trip as a young man, I have been friends with the Wilmots. I had gone back a few times and just loved it every time. It had great waves and I became closer with the family,” Bourgeois states.

After years of visits to the island nation and developing friendships, Bourgeois was asked to coach the up-and-coming Jamaican surfers in the 2019 International Surfing Association’s Pan American Games in Peru, where he had competed several times and even earned gold for the United States.

Though Bourgeois’s humble, amiable, Southern demeanor wouldn’t allow him to admit this, he is often lauded as having one of the most flawless techniques in modern surfing. So who better to lend a keen eye and critical assessment to fledgling surfers than the former World Tour veteran and decades-long friend?

“Competing in the ISA Pan Am Games was, still to this day, one of my favorite competitive experiences,” he says. “To get to represent my country among all the other countries was amazing and made me feel really proud to be a part of it. It was really cool that the Jamaican team got to compete and experience that sense of pride as well, and that I got to be a part of it.”

It was through this natural progression that Bourgeois was asked to coach the Jamaicans in a qualifying event for the Olympics, scheduled in El Salvador May 29 – June 6.

It’s hard not to think of the comparison to the 1990s film Cool Runnings, in which the underdog Jamaicans compete as bobsledders in the Winter Olympics — because the Jamaicans are indeed long shots when it comes to competitive surfing.

“People still think that Jamaica doesn’t even have waves,” Bourgeois says. “Jamaicans have a friendly, relaxed nature and desire to share waves with others, but we are working on a lot of competitive tactics and surfing techniques. The surfers have got their work cut out for them, but they are working hard.”

The athleticism, regimented training, diet and competitive focus that prevail in surfing now are a far cry from decades past, even during Bourgeois’s tenure as a competitor, and it’s something that he is continually working on with the team.

As Bourgeois helps shape the future of Jamaican surfing through weeks-long visits to the team, extensive training, video analysis, and equipment modifications, he’s impressed with the country’s commitment to the sport.

“Jamaica has a lot of medals from the Olympics, but now surfing is being recognized since it made it into the Olympics, so it’s awesome to see the Jamaican Olympic Association actually giving a lot of support to the surfers,” Bourgeois says. “It’s still a tiny sport, but it’s cool that the Jamaicans can travel and represent their country as surfers on a global scale. Surfing is very limited in the Olympics for this first year, so we’ll see how it all pans out.”

With the qualifier in El Salvador, the Jamaicans have only one opportunity to make it into the Olympics. Only a handful of slots are available for hundreds of vying surfers from around the world.

Bourgeois hopes his true underdogs make it to the Japan Olympics. But, perhaps more importantly, he hopes that Jamaican surfing will finally get the worldwide recognition it deserves.

He would consider that a win for the nation he’s been blessed to enjoy over the last 20 years.