Home of Distinction: Under One Roof 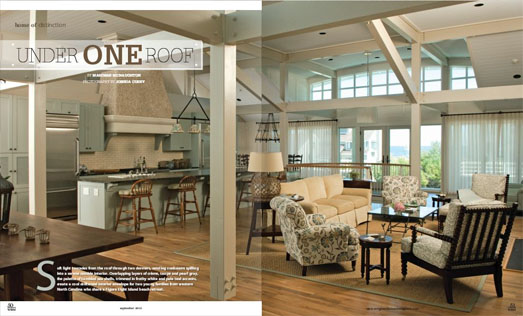 Sometimes they take turns. Other times they occupy the house together sharing two of everything: two master bedroom suites one for each set of parents two bedrooms upstairs with two baths each and two bedrooms downstairs for four girls and two boys altogether six children combined. There is one formal great room upstairs one informal rec room downstairs.

The kitchen is equipped with two double stainless steel Whirlpool Monogram refrigerators. Two sinks in the expansive soapstone island offer ample elbow room for two cooks to prep and serve meals at one of two tables: a breakfast square flanked by ladder back chairs or for the evenings repast plates passed down the length of a massive walnut trestle-style dining table flanked with matching walnut benches.

In the open living room one sofa two arm chairs two club chairs and two plush chaise lounges are arranged over a sisal rug around the slate fireplace cozy enough for one couple yet comfortable for a group of 10 or more.

Wilmington architect Ian Johnston Johnston Architecture LLP AIA and Pfafftown interior designer Happy Martin worked in tandem to redefine the 30-something-year-old beach cottage. Johnston tackled the structure and the floorplan while Martin developed the furniture plan the arrangement and grouping of pieces and the draperies and wallpapers to support a new style of cottage living for two families and sets of friends under one roof.

The original house was relatively nondescript. The landscaping was overgrown with a volunteer evergreen obliterating interior views of the ocean from slender French doors double hung bedroom windows and one Palladian porthole. Yards of natural wood finish faux walls and salt-water taffy pastel pink and green wallpapers characterized the house when the two families took possession in 2007. By 2008 they were in talks with Johnston to redesign the interior without altering the footprint. In 2009 the renovation contracted to King Post Design & Construction was fully underway.

Johnston says the first challenge was overcoming the existing layout which had been modified at least once since the house had been designed in 1980 and built in 1981 for a doctor and his wife. The primary living and dining areas were on the main level with bedrooms at the north and south ends.

“This room ” Johnston says from the great room “was really very compartmentalized.”

True to its 80s origins the interior suffered beneath low eight-foot ceilings and angled walls that partitioned the kitchen from the living room the dining room from the kitchen. The overall tone of the space was claustrophobic.

“It was so closed ” Johnston says “80s skewed geometry the space kind of meandered very unpleasant not much light very dysfunctional. The kitchen was very dark. When you were in the common rooms of the house you couldnt see any more than one view at one time very small punched openings.”

The interior living spaces did not communicate with one another nor did the floorplan relate at all to the ocean or acknowledge the island setting in any way yet ironically the second-floor attic had a 12-foot clearance. This became Johnstons opportunity to blow the lid off the eight-foot ceiling and by pirating the attic volume create a new grander sense of scale a better match for the unencumbered seaside site.

However before that could happen several major considerations had to be made during the design phase.

“The big concern was how we were going to resupport this whole affair ” Johnston says.

This sent the architect into an analysis of the structural grid to carefully examine the geometry of the house in order to reorganize the floorplan.

First to elevate the ceiling the interior partition walls came down and were later supported with solid Douglas fir sawn columns erected over the existing pilings. Now the timber columns support an open-beamed ceiling system that holds the structure together. Design-wise the new ceiling height could not proportionally overwhelm the living areas comfort zone so Johnston stacked the ceiling beams lofting the eight-foot ceiling to 11.5 feet before pushing to more than 13 feet configuring the arrangement of roof beams to define the sub spaces.

“Each one floats in its own structural bay ” Johnston says pointing out for example the subtle definition between the dining area and the breakfast area the living room and the kitchen.

Second a reconfiguration of bedrooms and bathrooms was required incorporating the lower floor originally an underused enclosed garage that also housed a laundry room and the interior stair now replaced with a true spiral staircase that ushers the families and their guests into the spacious open area on the main level. During the renovation two small bedrooms were added at the ground level and Johnston redesigned the space to add a recreation area for the kids extended to a landscaped oasis beneath the back deck equipped with a woven hammock that was created for the site by Tony Parker of Classic Landscapes.

Third there had to be some way to introduce daylight into the space. By peeling back the outer skin of the front and rear facades and creating two 30-foot window walls light pours into the house from the east and west and as the sun passes overhead by eliminating a trio of useless attic dormers through the addition of the two extended dormers.

The dormers form elegant lines each created from a pair of concentrically curved steel beams one concealed at mid roof the other pushed toward the outer roofline. The whole idea Johnston says was to add a sculptural element to the exterior design something unique and memorable something more complex.

“Like the curve of a seashell or the very subtle curve youd see in the wind-sculpted vegetation of the island ” he says.

The dormers gently warped profiles led to a reshaping of the overall roof line. The gable ends were flared and with the addition of buttressed rafter tails the roof was extended beyond the eaves then reshingled; and the chimney chase resculpted.

Inside the arc of the dormer is reiterated in the spiral of the stair the edge of the floating island the curve of the tabby fireplace chimney mirrored on the opposite wall with a tabby hood above the eight burner commercial gas range and ovens.

From this large collection of small spaces Johnston designed a splendid great room. The overall effect is one of simplicity. “The whole thing was refinement stepping back from it far enough to really bring a sense of refinement and elegance to the room. Its a big leap from where we started.”

The selection of furnishings leans toward the contemporary found in yards of drapery hung from cast iron rods and oversized vases and table lamps yet speaks to the co-owners western Carolina roots in turned spool or bobbin arm chairs a rustic sofa table a twiggy branch chandelier a trio of hand-painted paper shades to echo club chair textiles and in the bedrooms a sprinkling of distressed shabby chic chests and end tables a wicker arm chair a pious straight-backed bench.

To create more flexible outdoor space Johnston called for the ripping out of the screened porch on the west elevation the removal of a dated sauna and hot tub area the gutting of a family room the tearing out of an infants nursery.

The open decking is now shaded by a trellis on the lagoon side where layered views of the Intracoastal Waterway are sandwiched between Figure Eight Islands manmade canals in the foreground and Futch Creek and the mainland in the far distance.

After a day out on the water the house is like a beacon lit from the inside the dormer winking like a lantern welcoming its families home.