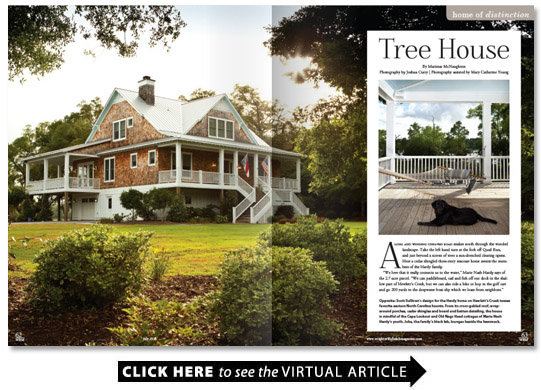 A long and winding unpaved road snakes south through the wooded landscape. Take the left hand turn at the fork off Quail Run and just beyond a screen of trees a sun-drenched clearing opens. Here a cedar shingled three-story seacoast home awaits the members of the Hardy family.

“We love that it really connects us to the water ” Marie Nash Hardy says of the 2.7-acre parcel. “We can paddleboard sail and fish off our dock in the shallow part of Hewlett’s Creek but we can also ride a bike or hop in the golf cart and go 200 yards to the deepwater boat slip which we lease from neighbors.”

In the family’s 23-foot Sea Hunt center console skiff she says “We can go from standing in the kitchen with a cup of coffee to sitting on a surfboard in the lineup at nearby Masonboro Island in less than 15 minutes.”

With her husband Stuart Hardy the couple’s date nights often involve a cruise to nearby Wrightsville Beach to dine at the Blockade Runner’s East or to tie up at the town’s dock to walk to Tower Seven.

Marie’s name pronounced Ma RĒĒ is very eastern North Carolina — and her unpretentious home lives and feels the same way borrowing traditions from her Tarboro roots from her family’s vacations spent on the Cape Lookout Seashore and from their connection to the famed Drane Cottage in Old Nags Head.

Standing in her living room awash with sunlight welcomed through undraped windows she says “We built the house so that you feel like you’re outdoors even when you’re sitting on the living room couch. There is lots of light even though you are tucked under beautiful old live oaks. We’re such an outdoor family we wanted to feel like we lived in a tree house. It’s great in a storm.”

The floors throughout the home are reclaimed tobacco barn wood. The walls are painted a double strength shade of white dove.

“We wanted everything — the floors the rugs and the art — to pop so we came through and did everything in white but we wanted just a little bit of a contrast with the trim ” says interior designer Hooper Patterson who joined the project at a crucial time in the process when finishes were selected and the furnishings plan conceived.

“We ended up taking some of the pieces she had mixing them in with new pieces and adding pieces we found at auctions estate sales ” Patterson says. Some items were slip covered others reupholstered. A pair of wooden armchairs was headed for the curbside but Patterson salvaged them with coats of high gloss grey paint and new cushions.

A heart pine farm table built by a Durham craftsman was a gift from Stuart Hardy’s mother and originally paired with dark wood chairs. Patterson found metal lattice-back chairs at Designer Workshop in Warsaw North Carolina and added blue and white chevron textiles to the seat cushions for a bold look reiterated in the metal drum shade chandelier selected by Stuart.

? “Basically it added a lot of funk to the table ” Patterson says “which it needed.”

The dining room sits at the far end of the long entry hall and floats between the kitchen and a gaming area open to the living room. The neutral palette is balanced with blue and white textiles and pottery.

“We started by layering textures ” Patterson says. The color scheme’s indigo base was pulled from blue dyes found in Oriental scatter rugs some already owned others purchased at Big South Auctions on Market Street.

In the living room a linen slipcover was custom made for an outworn seersucker sectional sofa. A deep ruby and indigo rug layered on top of a wide weave sisal carpet is seen through the clear glass and gold-tone metal coffee table another funky Age of Aquarius throwback. A pair of worn leather armchairs dignify a collection of family silver — baby cups to loving cups — displayed in an heirloom glass-front cabinet one part of a much larger repository previously used by a Hillsborough physician an ancestor who used the piece for storing medical books and equipment.

“It needed to feel functional and relaxed because that’s how they are ” Patterson says of the Hardy family and the way the two doctors — Marie a dermatologist and Stuart an ear nose and throat specialist — spend time together with their three children — two sons James 14 Nash 12 and Kate 9 — and a menagerie of pets: Juke a lovable black Lab; two cats and Gary the snake.

“I didn’t want to design anything that was too over the top or something you couldn’t put your feet up on. Marie even said ‘We’re going to trash it ‘” Patterson says.

Patterson envisioned the dogtrot floorplan as one filled with children and pets running throughout. The open plan Marie adds is not for everyone “because your stuff is everywhere for the world to see. When the kids come home from school it’s homework central right here ” she says at the dining room table.

Patterson was also sensitive to the family’s budget.

“Budget’s always so important ” she says. “You invest the money in the things that are going to be here for awhile like gorgeous countertops and lighting and the floors ? things that make a really big impact. So when it came to furniture it was like: ‘Let’s see what we can use and repurpose without sacrificing the look or the bank account.'”

The architectural design rendered by Scott Sullivan was tweaked for the Hardys’ lifestyle too and for the site specifically. Instead of a fireplace to anchor the east wall builder Parker Dudley suggested the placement of doors and windows to capture the views. Trim carpenter Tony Holland designed the living room mantle flanked by built-in bookshelves fabricated by cabinetmaker Brandon Parrow who also customized the rough-hewn hemlock wood hood above the Viking gas range in the kitchen from a photograph Marie shared with him. Susan Covington of SAC Art Inc. harvested the front door and also repurposed an old store counter found in Wilson for the kitchen’s central island. The honed Carrera marble island top complements the concrete counters both cut cast and installed by Bluewater Surfaces’ Dustin Broadway.

Off the kitchen a screened porch is equipped with an outdoor grill and furnished with wooden dining table and chairs. A colorful array of painted rattan settees looks over Spanish moss-draped live oaks. Stuart Hardy built a pair of Adirondack chairs for the open L-shaped back porch anchored by a hammock that faces the grounds and the family’s dock where the johnboat is docked.

“The kids are starting to get more independent on the water and this is a perfect location for that ” Marie says. “James can scoot in the johnboat right across the inland waterway to creeks that are perfect for oystering.”

With the master suite and a guest room downstairs the Hardy kids share the third floor. Kate sleeps in her mother’s antique heirloom bed and has her own bathroom. The brothers share a bath and all have access to an open den but their independence is ultimately supported with a ground level game room.

Tricked out with a hot pink lacquer rattan sofa and pale teal ultra-suede upholstered loungers the game room includes a full-sized regulation pool and Ping Pong tables and a treadmill. Through the garage doors the golf cart sits on electric charge with surf boards strapped to the top ready to roll.

“We looked at this property years ago but none of the waterfront had been cleared and you might as well have been standing 150 miles inland ” Marie says. “There was no sense of proximity to the water. It’s full of wildlife: ospreys bald eagles foxes.”

After living beside the property for a year they purchased the land and began to build.

“It was a wonderful team effort ” Marie says. “We changed a lot as we went along.”

After move-in a year ago she has found “the marble etches when I leave lemons on it the concrete shows watermarks the floor shows dog scratches big time but it just makes me love the house all the more because it reminds me how heavily we live here.”