The legend of Joshuas Landing is told door-to-door from person-to-person embellished by some no doubt in the telling though the premise is simple: an African American waterman named Joshua owned the landing on Hewletts Creek where he oystered and clammed and sold the fruit of his pursuits to passersby on the Greenville Loop road front. 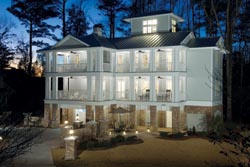 Today Joshuas Landing Lane is a safe mooring for many custom-designed and built homes. It is where Larry and Lori Carpenter dropped anchor and built themselves a
forever house.

Three floors of living rooms stacked one over the other lay out like a ship with small chambers linked to the outdoors via open decks and porches.

“I get so excited when I drive over that bridge coming from Hickory ” Lori Carpenter says. “A lot of times I just cry. Im so happy. Any of the stress … doesnt cross that bridge. Its such a blessing I love it here you just dont know.”

She and her husband Larry settled into their new home last May. Blazing a trail from the foothills to the coast was a no brainer for the Carpenters who for 35 years lived on Lake Norman. Seasonally they visited Loris brother in Wilmington. Together they fell in love with the beach. Faced with choosing where to live when they retired their daughter helped them decide to make a permanent home for themselves near the beach. 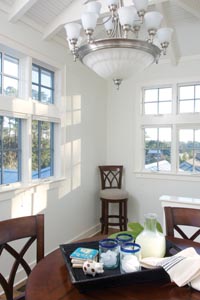 “The house we used to live in had so much to do with this one because it was everything this was not ” Lori says. “It was real rustic and very dark . . . it looked like it belonged in the mountains. I thought If Im moving to the beach number one I want to always feel like I could go outside quickly.”

Lori a lover of porches wanted to be sure that all of the rooms in her new home would have access to decks even the bedrooms. She often seeks the freedom found in the barefoot refuge of these quiet spaces at all times of day and often in the middle of the night.

“I just wanted that open feel that I was not shut inside. I want to feel like I can always get outside easily. If you cant get out you can go up to the tower and sit and see out. Ive got places to go ” Lori says. “I dont like to feel confined but I still like to know whats going on around me.”

Shortly after remodeling their lake home they sold it. After investing in the lot on Joshuas Landing Lori began collecting ideas for coastal dwellings from magazines.

“I would … tear out a page here and there. Never the same house ” she says. “If you spread them out its all combined into this. One of them was a tower in a house that had windows all around that you could open and get that breeze and see out.”

Larry shares his wifes passion for the outdoors. A retired high school wrestling coach he hikes the Appalachian Trail alone weekends at a time. He was also for 25 years the drafting instructor at St. Stephens High School and when it came time to make Loris dream house come true he crafted the preliminary drawings. When it came time to hire an architect they chose Todd Beck one of Larrys former students. 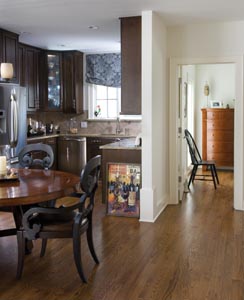 Lori walked and wandered the warehouses of Hickory during her lunch hours to furnish and light her new home. “Ive got a story behind every piece Ive got in here ” she says.

She chose carefully gathering a feel for the furniture as the plan came together. Balancing the flood of sunlight mirrored in white walls she gravitated to the earthy palette of her old lake home selecting dark wood tables and chairs cabinets and countertops brightened by framed prints and decorative chandeliers and wall sconces.

The tower stair initially designed like a ships ladder is more like a library ladder which fits the future use of the space once it is furbished with bookshelves as a great place to retreat and read. Lori foresees the day that her granddaughters are old enough to climb into the tower and sleep.

For now the Carpenters fashioned a padded play nest for them at the ground level under the stairwell with easy access to the patio. While the girls are busy chalking the pavers the Carpenters enjoy the twilight hours and chatting with the neighbors.

“If anybody walks by they come and sit … so its a good gathering area for the neighborhood ” Lori says. “We enjoy that a lot.”

Joshuas Landing is an oasis tucked far enough off the beaten path that the sound of passing traffic is never heard. The community is populated with lovely families that the Carpenters have come to know. 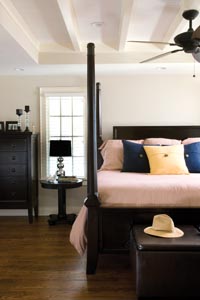 As fortune would have it Mark Schmidt is one of their neighbors who hopped the fence one day and introduced himself. Ironically he later became their builder.

“I like the trust that I gained from the homeowners to give them ideas that they went with ” Schmidt says.

The house he describes was uniquely engineered for its coastal setting exceeding the building codes in all aspects.

“When you go to different areas builders build for that area whatever techniques are used seem to get adopted ” Schmidt says.

A typical home would be set on pilings but Schmidt says one of the unique features of the Carpenter home is construction is that it is engineered with block work up to the first floor with the footers sunk 30 inches below the first course.

“Theyre dug deeper theyre poured deeper and we laid three blocks before we laid the grade line ” Schmidt says. “Typically here you might have half of the block below grade.”

With its foundation secured across the front faade with through rods every two feet instead of every eight feet (that Schmidt says help support the double-stacked porches) and across the back of the house every four feet the hollowed cinder block cells that bear the through rods are required to be filled. At the Carpenter home all of the cells in all of the blocks are filled. The walls are bolted down through the blocks to the foundation and all of the walls are sandwiched two-by-fours. The exterior is covered in Hardi Lap and the tower in staggered Hardi Shake and siding. 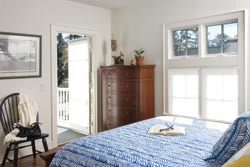 Details whether they are aesthetic or structural include 36 columns across the front elevation overhanging eaves on the side elevations exposed-beamed ceilings in the master bedroom and the tower covered in tongue-in-groove beaded board.

“The lookout tower has to have the most detail ” Schmidt says. “For the space it took the most amount of labor and skill to frame. It was fun to build. It was challenging; it was not typical.”

When they initially put the house out to bid the Carpenters were sunk by the cost of the construction. After they met Schmidt followed by a drop in interest rates the result of the economic downturn Larry and Lori finally found their silver lining and were able to build their home for less than they had anticipated.

“Its made us feel like maybe you should do with less and enjoy home more ” Lori says “home more and family.”