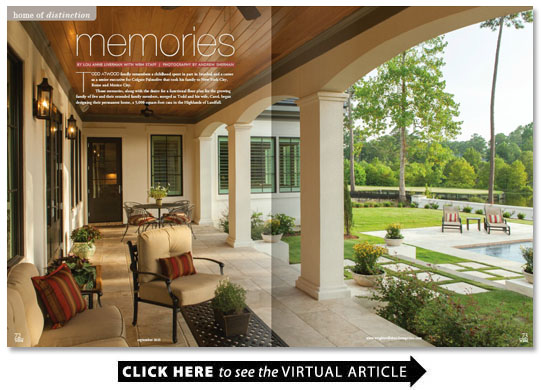 Todd Atwood fondly remembers a childhood spent in part in Istanbul and a career as a senior executive for Colgate Palmolive that took his family to New York City Rome and Mexico City.

Those memories along with the desire for a functional floor plan for the growing family of five and their extended family members merged as Todd and his wife Carol began designing their permanent home a 5 000-square-foot casa in the Highlands of Landfall.

“We are the baby boomers ” laughs Todd explaining how the family’s needs and overall lifestyle when they moved back to the states — and to Landfall — in 2008 were different than three years ago when they actively began searching for the perfect setting for the dream home they envisioned.

“Todd brought me this rough design ” says Whit Honeycutt general manager of North State. “The Atwoods’ inspiration was to design a home that took them back to the period of time in their lives they lived internationally.”

“Modern Mediterranean — plus whatever else we wanted ” Carol laughs.

The challenge came from combining the interior with the exterior. We strategically located the interior living spaces to have a full view of the panoramic landscape outside ” Lechtrecker says.

Sited on a spacious lot with expansive front and back fairway views of one of Landfall’s flagship golf holes — as well as pool lake and wooded marsh views from the rear — the home’s openness and first-floor continuity showcase ground-floor living at its optimum.

Open views were very important to us ” Todd says. “And also we didn’t want a lot of interior walls.”

“You get a definite sense right away of their style from their original artwork and from the art gallery feel of the entryway ” says interior designer Renee Russo-Smith of Nest Fine Gifts. “We really tried to place the art pieces they’ve collected that were most special to them in the forefront.”

From the foyer French doors and expansive windows entice guests into the heart of the home beginning with the dining room for both informal and formal meals and flowing into the kitchen and living area.

The home’s exterior and interior spaces are seamlessly layered for both an intriguing and engaging ambiance. The living areas are complemented and inspired by memories — Mexican and Italian furnishings and d�cor maps of ancient Turkey and prints from Istanbul.

“It’s all very layered and inviting ” says Russo-Smith who had an integral voice in both interior and exterior finish and material choices early in the collaborative design process with Lechtrecker and Honeycutt. “A lot of my role from the beginning was keeping things on track with the vision they wanted for their home — making sure everything blended well transitioned well that there was consistency throughout the house — and most important helping capture the view of the water and golf course that they both loved. Everything was to capitalize on that.”

Inspired by the family’s nearly 6 000-square-foot apartment during a stint in Mexico City Carol’s home office laundry pantry and workspace are behind the kitchen. The second master suite can also be accessed through this space.

“We had live-in help in Mexico ” Carol says. “And the whole world is behind the kitchen. It’s where the maid sleeps does laundry. The kitchen belonged to her also.”

Todd adds “It opens up your mind to the idea to use the kitchen as a separation point in the house.”

he Atwoods wanted a layout that would support their daily routine a routine that evolved since they returned stateside.

“This is the first time in my career that we’ve designed a home around a stage of life rather than a particular style ” says Honeycutt.

“And the layout works exactly how we hoped it would for our daily routine ”
Carol says.