Where the road loops round the sounds across the creek you will find the turn hidden behind a stand of trees in which a clearing has been carved out and a house planted in the sunshine warmed in the winter by the suns low arcing rays and cooled in the summer by so many shady limbs. 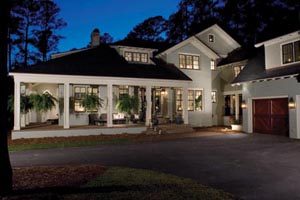 It is a sprawling home with a main house linked to a carriage house by way of an elevated bridge over moving water and the permanent home for the daughter of prominent custom home builder Jim Farlow. While assisting her father working with clients and architects with design specifications and the selection of interior finishes she squirreled away the nuggets she prized the most until one day there were enough elements in place to make a house for herself and her family over the river and through the wood.

“I like most of the houses that we do. Her house is very livable ” says Farlow who resides just 600 feet away from his daughters door.

Farlow who has four children says this daughter is the only one who has dabbled in the building tradition. “It was fun working with my daughter. Were close. Were a lot alike and we like the same things.” 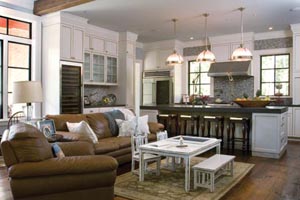 “Its more expensive now ” Farlow says “but you reclaim it over time. If you insulate well you pay less utility bills and you have cleaner air.”

Farlow who has been building in this area for 34 years has built many homes in the last 20 for architects Ligon Flynn and his colleague Virginia Woodruff.

“The selection of Ginny Woodruff as architect had a lot to do with our relationship with the Farlow Group and the fact that weve worked on lots of projects over time ” Farlow says.

Farlows daughter who worked for her father for almost three years when she moved back to Wilmington had experience working with Woodruff and others and was aware that Woodruffs design embraced many of the tenets extolled by Ligon Flynn. 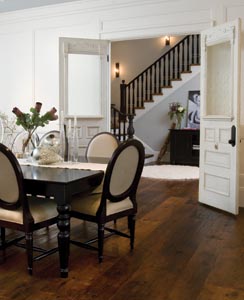 “Ligons plans tend to have that sense and he started long before great rooms were the vogue of having the kitchen the island frequently the dining area living room all in that one big space ” Farlow says. “He designs a house to be comfortable inside but to incorporate the views accentuate the outside and the enjoyment of what you see outside this plan is similar in that its all open area.”

Woodruff agrees with Farlows assessment of the Ligon Flynn legacy saying “Having worked with him for 18 years in his firm and collaborating with him ever since there isnt anybody whos had more impact on my design work than he has.”

“To me this house is kind of eclectic contemporary floorplans with classic detailing. When we first discussed the program for the house she knew she wanted to incorporate tabby for the fireplaces. She knew about getting the wood for the floors the old barn wood and the newel posts for the stairs.” 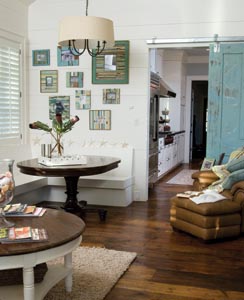 That included the desire to welcome light flooding the interior as much as possible affecting the placement of clerestory windows in the entry hall and a window wall in the living room.

“She also liked changes in level. I incorporated that in the upstairs simply because it allowed us to stay within the roof without making it such a tall house. We did gradually get higher within the roof and allow the main living area to have the tallest ceilings. That is something that appealed to her and allowed the house to stay as low as possible even though it is certainly not a small house ” Woodruff says.

The bedroom level is incorporated into the roof in keeping with a bungalow style. Woodruff says that tempers the scale of the house as much as possible perforating the pitch with dormers trying not to overwhelm the neighborhood or the surrounding woodland setting.

The young couple like entertaining and enjoy hosting large numbers of people in the home with the living areas open and related to each other. “She loved the idea of a long rectangular island in the kitchen that specific island arrangement and she selected most of the interior materials herself ” Woodruff says. 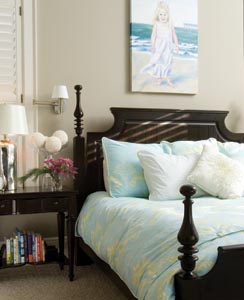 Her clients also wanted a number of bedrooms in preparation for growing a family along with a three-car garage with good storage intimate family spaces with a getaway space and a dedicated man room over the carriage house attached to the main house like a traditional dependency attached by way of a breezeway.

“It seems far nicer if you have the space to separate the garage and allow that breezeway kind of connection ” Woodruff says. “With her house we were able to incorporate the fountain that is viewed from the dining room that is on the wall of the garage. You gain a lot of opportunities with that inside and outside again. Its a small version of the punched openings in Ligons work that allows you to see views. Here it allows you to bring in some plant material and soften it a bit.”

From the dining room the fountain three copper pipes pouring equal amounts of water into a trough is framed by the bridge a transitional cozy wee space with low ceilings. Furnished with cushioned window seats it is a quiet reading place hushed even more so by the sound of running water from the fountain below and flushed with windows. 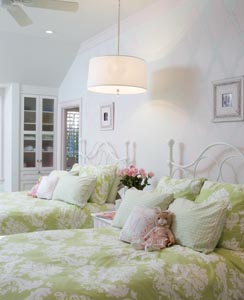 That and the porches were quite intentional.

“I think weve all come to realize that when you spend your time in an air-conditioned home you separate from the out-of-doors and your neighbors. Porches give you that feel again of connecting. The idea is to have porches the screened porch and the other porches that you can enjoy and sit outside and certainly the screened porch makes that more doable ” Woodruff says.

“I dont think you can look at this house and tell what style it is ” Woodruff admits. “I think we were both trying to do this with this house. What we try to do is make a house that isnt dated thats the hope is that its a kind of a timeless design.”

CREATING A HOME OF DISTINCTION