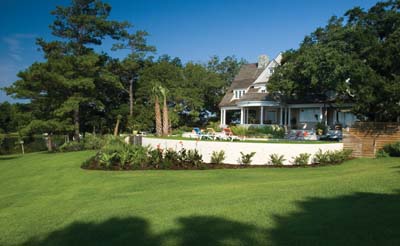 Lauren had dried her tears. A Walk to Remember inspired by the Nicholas Sparks novel starring Mandy Moore Shane West and Darryl Hannah as Cynthia Carter was rolling the credits and Lauren was more than a little choked up over the love story of two star-crossed teenagers.

The native New Yorker had fallen in love with Cynthia Carters shingled cottage. Its exposed rafter tails its pert white shutters with sailboat cutouts and the romantic waterway location a fertile garden oasis amid shady live oak trees set somewhere along the coast of North Carolina had stolen her heart.

At the time of the films release in 2002 Lauren her husband Eric and their two daughters Nicole now 14 and Courtney 11 were living in Huntington on Oyster Bay Long Islands north shore. As fate would have it two years later in 2004 after Eric purchased a Wilmington business he found himself seeking a new home for Lauren and their family on the North Carolina coast.

Off Masonboro Road at Cabbage Inlet in a community fatefully named Oyster Bay he found the perfect setting: two and a half acres on a high bluff overlooking the oyster middens on Whiskey Creek. On the property was a vintage shingled cottage all that was left of Henry Kirkums place once the nexus of Uncle Henrys Oyster Roast a favorite haunt of the Masonboro crowd more than 100 years before. Folks came from all over for decades to the popular oyster house in spite of its rustic dirt floors kerosene lamps and long tables around which everybody stood and shucked their own until Hurricane Hazel hit in 1954 taking with her the oyster roast and leaving only a small dwelling for Eric to find. He was sold. 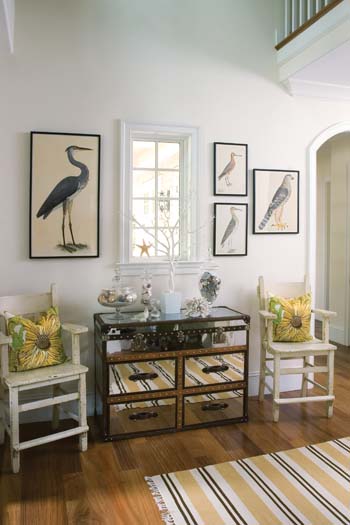 Eric moved his family into the little cottage and soon thereafter the legends began to unfold complete with rumors of buried treasure. When the property was excavated in 2006 to prepare for the construction of their new home on the same site Lauren discovered old bottles left from Uncle Henrys no doubt and clay pottery shards that Scott Simmons a University of North Carolina Wilmington anthropology professor told her had been left by the Native Americans thousands of years ago. It seems that long before the site was Uncle Henrys Oyster Roast it was a safe haven for indigenous people with an artesian well for fresh water access to the waterway for fresh fish and a high ravine to protect them from invasion from predators. Into this terrain the natives dug their roasting pits.

Rooted to the landscape one old oak shades the east lawn unruffled by the addition of a wooden lanai and swimming pool that distinguishes the new homes exuberant seacoast elevation a massing of open decks covered porches an engaged balcony and parapet wall linking gabled dormers and a rotunda.

On the south elevation a rope swing hangs in the shade of a second oak around which Zoe the Maltese and Labrador retrievers Brody and his sidekick Rex chase their tails when they are not off gunk-holing up to their gunwales in the creek bed. At low tide with Nicole and Courtney in tow the labs cross the middens to the opposite shore befriending the boaters at Masonboro Yacht Club and Marina.

The scene is drawn from a new chapter in this lands history. Even though the old cottage had to go the couples new home befits the tenor of its Masonboro neighbors. True to form the Shingle Style is the lively expression of the flow of nature characterized by a rambling floorplan and many architectural references to Victorian Queen Anne and Carpenter Gothic origins. 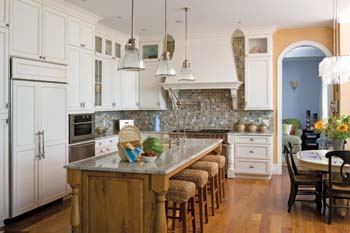 Architect Alex Latham understands this idiom as well. Lauren and Eric imported his talents from their Huntington Long Island home base; and for them he recreated a lavish 8 000-square-foot estate with many entrances and exits framing vistas of rolling lawns and sparkling water from every vantage.

The sophisticated New England style is detailed with shingled gables turrets bay windows long corridors arched doorways a motif that is reiterated in the brow of casement windows the arc of the staircase and in door moldings. The scale of interior spaces adds the dimension of grandeur with few formal frills save for the coffered ceiling in the living room a rotunda in the master suite and an open story-book library that looks over the family room from the second-level balcony.

Coastal themes are reflected in the choice of the Brazilian teak cumaru floors a grass bed skirt and palm-frond fan blades for a guest room a coral framed mirror in a hall bath a sisal rug in the dining room beneath the claw-foot table the grass cloth wall covering in the family room; glazed cupboards a glass and stone tile back-splash and sideboard wet bar in the kitchen; a high beaded board wainscot in the mud room; and grass resin walls with a river stone floor in the shower entered from the pool through the loggia and the outdoor room equipped with stone fireplace and hearth.

Nifty nautical references are found in subtle details like a ships wheel over the outdoor mantel boat cleat hardware sea shell drawer pulls and a scale model of a sailboat in the library.

Furnishings hand-picked by Lauren include an upholstered bed frame for an upstairs guest room and groupings of cushioned sofas love seats wicker armchairs and a chaise. Wall colors imitate a natural palette of earthy pastels in subtle shades of papaya and cornsilk and lively decorative accent colors have been pulled from the pigments found in many of the large canvasses and original art pieces placed throughout the home.

There is an office-away-from-the-office for Eric with French pocket doors and a stag horn chandelier a second-floor playroom with a back entrance into Courtneys suite an in-home gym on the third floor for the parents which adjoins an arts and crafts room for the girls and their friends where they may create jewelry puppets or paint; and across the pea graveled driveway a carriage house apartment for Laurens parents sits above the three-car garage. 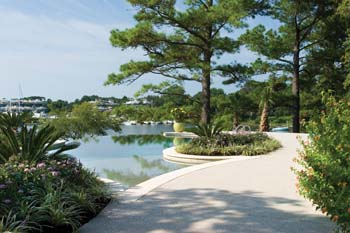 The indoor elements rooms and dcor link back to the outdoors and the location of this memorable landmark home. Already steeped in so many spirited good vibrations and iconic history it may be hard to fathom the most remarkable plot twist of all: This was the movie location of Cynthia Carters cottage in A Walk to Remember.