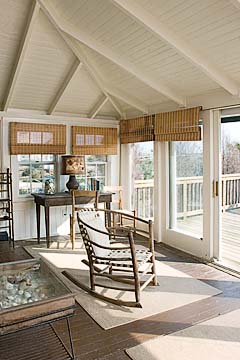 The bearing of this aristocratic breed of beach cottage in pristine mint condition is remarkable not only for its longevity but for its solitude and absolute stillness. Even the breakers framed in the aperture of the full-length sliding-glass doors that open to the ample deck are silenced by the integrity of this family treasure sans modern convenience and white noise. It is driftwood in its finest form chiseled out of solid timbers softened by the sands of time. Believed to have been built in the 1890s it is undisputedly the oldest house standing on Wrightsville Beach.

Tony Bluethenthal was born in the 1950s. Now in his mid 50s he is the unofficial caretaker of his familys Old Nags Head Style summer home. (Its always something replacement windows fascia boards roof shingles and decking are on the short list of perennial repairs.) “Im like a steward ” Tony says “the squatter. I sit back here and have a feel for what it was like 50 years ago.”

The “back here” he refers to was once the servant wing and is now dubbed the “bachelors quarters.” In the fashion of Old Nags Head this wing is called a dependency and runs on an east-west axis to the beach linked to the main house by a breezeway. Its linear footprint is arranged along the western edge of the property line. The three bedrooms three bathrooms and kitchen it provides are surplus lodging to accommodate extended family members and overflow for guests. It overlooks a courtyard filled with yaupon oleander beach lilies and a few volunteer palm trees that screen the entire compound from the view of the strollers and cyclers who tread this end of South Lumina Avenue.

In the main house the foyer opens into one great room arranged beneath high ceilings.

An upholstered sofa and a regiment of rattan armchairs are assembled with end tables upon which lamps rest with pressed leaves on paper shades. On the wall a map of the world there are no small subjects discussed in this room is flanked by sconces vintage oil lamps with hurricane glass chimneys.

The furnishings are Spartan handmade and handed down through the ages grouped on sisal rugs over pine floors painted chocolate brown. Many are held together with nails forged at the blacksmiths anvil and almost all of the cupboards are secured with hand-hewn wooden latches. Each bookshelf cupboard sideboard wardrobe and closet stores only one kind of book cup board or robe. There is a closet just for lanterns pitchers blenders and coffee urns a bin for sand toys another one for beach chairs and a closet for brooms.

A sideboard in the dining room holds stacks of woven placements. Tavern chairs surround a simple drop leaf table. A still life sea oats arranged in an early American crock inside the fireplace surround harvested from an old roadhouse holds the place where a fire would burn.

Vintage Claude Howell pen and ink sketches from 1955 and 1957 of skiffs in Banks Channel and the yucca growing wild in the dunes are among the framed art collected here. Etchings of historic Wilmington homes hang above the writing desk. Inside the desk the history of the Bluethenthal family is told in paper mementos commemorating the life of Arthur Bluethenthal and his father Herbert.

Arthur Bluethenthal born 1891 would be as old as his familys beach cottage had he lived to the age of 118. He was a native of Wilmington a star football player and football coach at Princeton in 1912. In 1916 he joined the American Ambulance Field Service and the Lafayette Flying Corps Escadrille 227 as a bomber pilot along with other Americans in service for France in March 1918. When America entered the war arrangements were made for Bluethenthal to serve with United States Naval Aviation. But he was the first North Carolinian killed in action in World War I on June 5 1918 near Maignelay France 50 miles north of Paris. His body was brought home in 1921 and reinterred in Oakdale Cemetery. On Memorial Day May 30 1928 the Wilmington airport was named Bluethenthal Field in his honor. 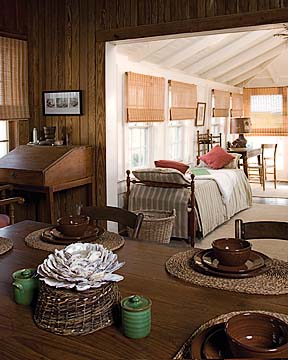 His father Herbert Bluethenthal was a successful merchant who operated a store on Front Street. The familys permanent home a Georgian Revival-style mansion was built in 1917 and was one of the original homes in the Market Street Mansion District now listed on the National Register of Historic Places. The home is opposite the Kenan House the official residence of the Chancellor of the University of North Carolina Wilmington. After he died in 1971 Herberts widow Janet Bluethenthal neighbor and friend of then Chancellor William Wagoner made a large gift to UNCW to preserve 10 acres now known as the Herbert Bluethenthal Memorial Wildflower Preserve which sits in the center of the university campus. The site includes a wide variety of plant communities that represent the greater southeastern North Carolina region.

These posthumous honors bestowed upon the Bluethenthal gentry notwithstanding Janet Bluethenthal was the familys leading lady a social maven with a philanthropic penchant.

“Grandmother was the grand matriarch ” Tony says. “She ran the household with an iron fist with very Victorian rules ” he chuckles. “She rang that little bell (on the sideboard) to call everyone to the table every afternoon. She stuffed us. After a full lunch with hot soup and other courses everyone was required to nap. She didnt eat much.”

Tony believes it was the strategy she used for pirating a bit of quiet time for herself. “Grandfather let her do her thing. She had many visitors who traveled from town to come see her at the beach.”

One of her neighbors Ginny Anne Landis Smith says she stood at her kitchen window all summer long watching in rapt amazement at the parade of charming well-heeled women who came and went from the Bluethenthal cottage.

“I had a crush on that woman. She was the most exotic interesting darling woman I ever met in my life. She had short curly hair beautiful teeth the cutest smile and little bandy legs. You could just look at her and say to yourself she is a powerhouse. If you were invited for lunch it was a command performance.” Smiths own mother was an occasional guest as was her grandmother the proprietress of the Landis Cottage one of the original guest homes popular during the early years of Wrightsville Beach.

Little has changed inside the house since Janet Bluethenthals era. There are original cast iron enameled and crystal door knobs throughout and scarcely a drop of paint anywhere save for the kitchen where the walls have been glossed white to ease cleanups. Spice jars and tins line the exposed studs and colorful red enamel pots hang above the stove. The sleeping porches are also painted white and furnished with an authentic day bed a rustic writing table and a dry sink stocked only with Canada Dry ginger ale and cork beverage coasters. In the corner a built-in hutch holds the treasures from four generations of beachcombers. 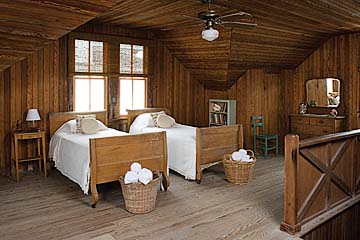 Everywhere there is evidence of a passion for collecting. The choicest coral and sea shells conch whelk Scotch bonnet angel wing and scallop are arranged under glass in situ in sand on the cork board and behind the breakfront. Old farm tools that harken back to the Bluethenthals earlier history a comb for winnowing wheat and a comb for carding wool offer historical depth.

There is just enough of everything needed to weather a season or a storm at the beach: lamps and books for reading including Boogaloo authored in 2003 by cousin Arthur Kempton windows that welcome the cross breezes ceiling fans to push the sultry summer air around the rooms board games Lincoln Logs and Legos.

On the first floor two adjoining bedrooms are separated by a massive pair of hung doors. In the soundside master a shared bath with an exterior entrance for aprs beach showers. In the oceanfront master a pair of twin beds nestled in the bosom of a bowed wall above them a rare photograph of the Bluethenthal ancestry.

In the opposite corners built-in beaded board wardrobes. One of these homemade armoires is filled with pale pastel blue buff yellow and blue terry cloth towels and bed linens meticulously placed and labeled according to size. Inside the door is a handwritten memo to the family members addressing Bluethenthals Kemptons and Pomerantezes: “Please when you leave and during your stay put towels sheets etc. (neatly folded) in the closet from which they came on the bottom of the appropriate pile.” Inside the closet beneath the stairs where jump rope and badminton racquets are stored is a similar list that details what watt light bulbs to use for every fixture in the house.

Upstairs one large open boudoir has a spacious sitting room with ocean views and a private bath tucked into the eaves.

More than two dozen platform rocking chairs are lined up along the porches.

The yard between the house and the dune line is filled with native plants allowed to grow wild the yucca gaillardia and coreopsis in summer.

There is not one superfluous item in this house not the clothesline and pins between the pilings nor the old oilskin jackets and woven straw sun hats hung from wooden pegs beside the front door. Everything has a place and everything is in its place.