Home of Distinction – All Capps

Lift the latch to Steve and Jan Capps gated Wrightsville Beach roost and the songs of nesting birds welcome the human spirit into a lush oasis. Landscaped by Mike Carter of Wrightsville Beach Landscaping around native yaupon holly trees tucked beneath a buttressed overhang the architectural canopy creates a shady allee where natural breezes travel the length of the formal entry to the Capps new cottage on East Asheville Street. 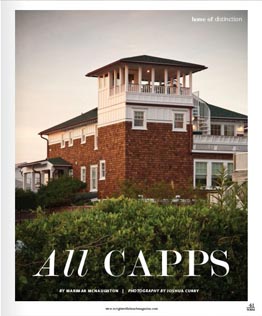 It is a Craftsman-style cottage in the truest sense of the word. More than 50 contractors artists artisans cabinet makers furniture makers carpenters framers builders and installers had their hands on the project.

From the half-round copper gutters and downspouts sourced from a Sneads Ferry manufacturer to the Western red shingles hand-dipped in Hampstead then hung on a clothes line to dry every element of the home was meticulously researched by the Capps and their core team: architect John Parker contractor John Chaney framer and trim carpenter Chris Cole and interior designer Tina Williamson.

Their many jovial roundtable conversations led to a multitude of one-of-a-kind collaborations.

“We had pretty routine lunches with John Parker and Chris Cole just to talk about stuff ” Steve Capps says. “John is a great guy. If Chris had an idea hed say Yeah thats a great idea; or maybe lets tweak this or tweak that.”

“Nobody ever talks about framing ” Steve says. “Chris is an artist. His eye for detail is pretty remarkable. His guys work is first rate. Their work is pretty spectacular.”

Native North Carolina woods are a special feature of the cottage outside and in.

“We have a lot of wood in the house ” Steve says. “We have a forest in this house.”

Cypress and pecky cypress were used for exposed beams wall panels and trim. Heart pine floors reclaimed from a Rockingham County textile mill were provided by a Scotland Neck company. All the trim moldings were milled locally by Kevin Kellet of Cape Fear Millwork. Many of the interior doors locally made by Mike Exley of Exley Custom Woodworking are inspired by the five-panel doors found in vintage beach homes. Curtis Martin master furniture maker crafted a custom Cape Fear riverwood dining table.

But Martins is not the only custom-made furniture. Coastal Cabinets Mike Powell best known for his exquisite kitchen cabinetry designed and fabricated a partners desk in the Capps study and bed frames in the bunk room. Powell also built custom furniture designed for the cottage by Tina Williamson.

Nothing went to waste in tearing down the old house. Four-by-six ceiling beams were repurposed into an outdoor dining table that Steve hand-built with the help of handyman extraordinaire Barry Owens. Easily weighing 350 or more pounds the table on casters is a ground-floor gathering area around the outdoor grill a few paces from the outdoor shower.

Throughout the home paintings appear like flashes of beach glass found in the sand.

“The entrance hall and the stair hall are a little like an art gallery ” Jan says leading the way from the downstairs foyer to the first level. “Almost all of the artists are North Carolina and New Elements Gallery and Spectrum are where we got several of them.”

More than one canvas is by Raleigh artist Richard Garrison. “He got us started and we just got a Ben Keys done ” Jan says pausing beside a portrait of their cottage by the well known local painter.

On the first-floor landing the bedroom suites are arranged along a central corridor. A den and adjoining porches overlook Asheville Street. Nestled inside the southeast corner the bunk room floats as if on a cloud.

With east and south facing windows the bedroom reserved for nieces nephews and grandchildren channels the feel of an old-fashioned sleeping porch. Two sets of bunks and a matching queen-sized bed designed and built by Powell suggest the elegant lines found in the chiseled contour of boat oars. The furnishings are arranged beneath cypress ceilings in front of board-and-batten wall boards and with built-in foot lockers along the exterior wall also designed and built by Powell that double as window seats the effect evokes the maritime era without feeling nautical.

“These floors just in this room ” Steve says tapping the boards “were salvaged from the old house.”

The adjoining bath features a brand new cast iron tub. “You cant beat cast iron for retaining heat ” Steve said. “Theyre big so if you have small children its a great place to bathe them.”

The bathrooms are uniformly tiled in old school white honeycomb outlined with black grout. “We got all the tiles from Southeastern and Sellers did the installation ” Steve says.

White ceramic tiles applied to the walls are mirrored in plush white towels purchased at Protocol. Each white-on-white bathroom is paired with a theme color reflected in tinted English field tiles. This innocuous-enough decision led the Capps to call Jans former high school classmate Tina Williamson into the process.

“Tina was a high school friend of mine ” Jan says “so Ive known her forever and ever. I was at that point saying we didnt need a decorator. We were going to keep this pretty low key. Steve picked out the colors in the bathrooms to go with the tiles and before 24 hours had elapsed I had called Tina and said We need a decorator.”

Upstairs cool white upholstered furnishings assembled beneath vaulted ceilings beamed with cypress create a crisp profile against the warmth of natural wood. In the far corner a cherrywood spiral staircase a double helix design was shipped in three pieces from Vassalboro Maine. It took two men two weeks to install the stair which later became an expensive piece of sculpture when the Capps discovered it did not meet the towns building code.

A second exterior spiral stair now links the open top-floor deck overlooking the rooftops and the Atlantic Ocean and the crows nest that towers above it.

Steve and Jan bought the original cottage at this location built in 1955 in 1995 just in time to get hit by Hurricane Fran. “I grew up down here and there hadnt been any hurricanes here in quite a while ” Jan says.

Wanting a place to be near her parents and to have somewhere that their children would like to come when they were middle-school age they kept that house for 15 more years.

Steve says “Every Sunday when we would drive across the bridge going back to Greensboro we would say There will be a time on a Sunday afternoon when were not getting in the car and driving across this bridge.”

They decided approximately 18 months ago about the time they were having grandchildren to tear down and rebuild in the same location.

“We talked about wanting to move down here and we finally jumped off the cliff and did it ” Jan says.

The Capps who moved into the home permanently in November say that with the windows opened there is very little need for air conditioning and that with closed-cell spray foam insulation their winter power bills were negligible.

The Capps could have hired anyone they wanted to build their home but made a point of working with the areas finest craftsmen. During the construction phase Steve had a sign created a separate shingle for each subcontractor.

“Steve had his mom come down and fix lunch for all the workers ” Jan says.

“My mother ” Steve continues “came down four times. She did breakfast and lunch for everybody who was at the house and most of the guys that were suppliers.”

Standing on the deck looking into their living room the sounds of songs birds fades to a hush replaced by the cries of terns and seagulls.

“We love Greenboro ” Jan says “but you cannot beat the sunrises here.”

“I sat out here last night ” Steve adds “and I mean there are certain days out here during the year when you can catch the moon going down and the sun coming up.”

Interior Staircase | One Step Beyond