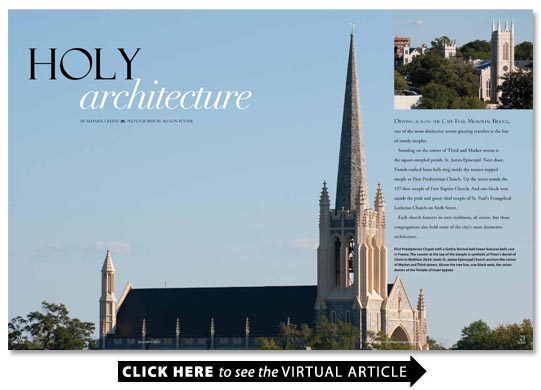 Driving across the Cape Fear Memorial Bridge one of the most distinctive scenes greeting travelers is the line of stately steeples.

Standing on the corner of Third and Market streets is the square-steepled parish St. James Episcopal. Next door French-crafted brass bells ring inside the rooster-topped steeple at First Presbyterian Church. Up the street stands the 197-foot steeple of First Baptist Church. And one block west stands the pink and green tiled steeple of St. Pauls Evangelical Lutheran Church on Sixth Street.

Each church features its own traditions of course but these congregations also hold some of the citys most distinctive architecture.

The entry of St. James Episcopal Church is embellished with white decorative paint against a stucco exterior. Crenulated parapet walls add height and loft where the sanctuary intersects the square Gothic Revival steeple. St. James Gothic arch windows are not unlike many found throughout downtown Wilmington North Carolina in churches of all denominations also built in the 1800s but this was the citys first Gothic Revival church. The church building was dedicated in 1840 and its architect Thomas Walter also designed the U.S. Capitol dome.

St. James Episcopal parishs early history is a dramatic tale including occupation by invading troops in two national conflicts. Its original building was completed in 1751 and financed through state taxation before the separation of church and state. St. James was seized by British troops 30 years later and converted into a stable and riding school for Tarletons dragoons a regiment of cavalrymen led by Loyalist Lieutenant-Colonel Banastre Tarleton.

More than 100 years later near the end of the Civil War tragedy struck the church again. Its keys and furnishings were taken by Union troops. The church rebounded and added on over the years covering an entire city block and becoming one of the largest churches in the Diocese of East Carolina.

The churchs sanctuary looks much brighter today than it has in the last 20 years because of a major renovation in the summer of 2012. All of the walls were repainted and the ceiling thoroughly cleaned of soot from previously used oil lamps. Some of the casings around the stained glass windows were also replaced repairing damage from water-intrusion into its main tower.

But St. James signature square tower has a practical use for its congregation during the holiest day of the Christian calendar: Easter.

Each Easter morning since 1866 the St. James congregation has climbed an interior stair from the choir loft to celebrate Jesus Christs resurrection during an Easter sunrise service at the top of the churchs tower. According to Susan Taylor Blocks church history Temple of Our Fathers children sing Easter carols including one composed by a church member titled Waken Children of the King.

In addition to its sanctuary a $1.26 million renovation of St. James adjacent McRae House which houses the church offices received a Gertrude S. Carraway Award of Merit from Preservation North Carolina in October as well as a 2012 Preservation Award from the Historic Wilmington Foundation.

Upjohn liked to mix and match his architectural styles.
At First Presbyterian he incorporated Gothic Revival Norman Romanesque and Tudor designs. Some elements of its architectural design are reminiscent of the Durham Cathedral in England.

The steeple of First Presbyterian Church is inspired by Gothic Revival architecture. Norman Romanesque elements thick stone walls and circular arches are featured in the architecture of the chapel. Tudor Elizabethan details the distinctive half-timbering on the Dock Street fa�ade also inspire the shaping of the chapels window frames.

The first three incarnations of First Presbyterian Church the first built in 1818 were consumed by fire. The present church was finished in 1928.

The earliest documented meetings of the congregation were in 1760 states University of North Carolina Wilmington history professor Walter Conser.

John Myers former art history professor at the University of North Carolina Wilmington once wrote that Hobart Upjohns architectural design provides the worshipper not only with a splendid place for worship and spiritual community but also with a wonderful illustrated guide to architectural history.

First Presbyterians senior pastor the Rev. Ernie Thompson says Upjohn added the rooster to the top of the churchs steeple to reflect ones he saw on steeples throughout Europe and as a symbol of Christs resurrection overcoming doubt. The biblical reference to the rooster appears in Matthew 26:34 where Jesus predicts Peters denial: Truly I say to you that this very night before a rooster crows you will deny me three times.

In the Dignity window near the pulpit he included the signing of the Constitution the scales of justice and Abraham Lincoln signing the Emancipation Proclamation. The Lincoln Memorial appears in the background because the monuments architect Henry Bacon grew up attending First Presbyterian.

Another famous son of the church was the nations 28th president Woodrow Wilson. His father was a pastor there for 11 years.

The churchs newest artistic feature is in its belfry. Replacing an electric carillon four new brass bells each cast in France were installed in February 2012 and hoisted up by giant cranes through the center of the tower. Former music director Doug Leightenheimer says the men installing the bells scaled the tower from the inside clinging to nothing but twisted iron rebar ladders.

Architect Samuel Sloan designed both the Moorish Revival Temple of Israel at the corner of Market and Fourth streets and the Gothic Revival architecture of First Baptist Church articulated in red brick. In keeping with the Neo Gothic Style the church features crenulated parapets buttressed walls and limestone banding.

The Western Tower replicates the Eastern Tower that soars to 197 feet. The slate steeple is perforated with gabled shutters for ventilation to prevent the tower from toppling. In an average wind it has been reported to sway between eight and ten inches.

First Baptists original congregation was organized in 1808 and known as Front Street Baptist Church. Construction on its current early English Gothic structure at Fifth and Market streets began in 1860 but completion was delayed until 1870 because of the Civil War. Tons of discarded ship ballast from Cape Fear River vessels line the sanctuarys foundation.

During the yellow fever epidemic that killed about 450 people in three months in 1862 First Baptists pastor the Rev. John Pritchard and the rector of St. James Episcopal the Rev. Robert Drane died of the disease.

Its dark wood sanctuary has kneelers usually associated with more liturgical worship services because its early congregants knelt for prayer church records reveal. Its pews have dividers of varying lengths because in the early life of the church pews were rented yearly for between $5 and $500 depending on the size of the family. The Temple of Israels pew boxes are fabricated with the same decorative carvings as those found at First Baptist.

First Baptist planted nine area churches and was represented at the founding of the Southern Baptist Convention though the church has now switched affiliations to the Cooperative Baptist Fellowship.

According to Tony Wrenn author of Wilmington North Carolina: An Architectural and Historical Portrait once the tallest spire in the United States First Baptists signature 197-foot steeple was struck down during Hurricane Fran in 1996. The church rebuilt the tower to its original height. The walls at its base are more than three feet thick.

The stucco fa�ade of St. Pauls Lutheran Church was added over its initial brick exterior. Its octagonal spire and roof are embellished with unique green triangular designs adding to the ornate character of the church known for its Tiffany style stained-glass windows.

Like First Baptist Church the construction of St. Pauls Evangelical Lutheran Church was disrupted by the Civil War.

St. Pauls churchyard was a military camp and troops stabled their horses in the unfinished sanctuary further slowing the building process. The Gothic Style structure wasnt completed until 1869.

A church of German immigrants its consecration service was also celebrated in German states a history written by Ann Hewlett Hutteman. In 1894 the churchs Sunday School building burnt to the ground and the congregation at Temple of Israel itself comprised of many German families offered its basement to St. Pauls to continue its classes.

As the congregation grew it was able to enlarge the church and add its current lancet-shaped stained-glass windows in the early 1900s. The windows were constructed by Frank Ellsworth Weeder Stained Glass Studio of Philadelphia. The opalescent glass a purely American method made famous by Louis Tiffany has a milky look created from fused glass panes.

All of St. Pauls storytelling windows are framed like a church within a church with decorative columns making it seem as if one has happened upon the biblical scenes.

The churchs associate pastor the Rev. Mark Opgrand says many of the churchs windows are artistic impressions of famous paintings from biblical scriptures.

Above the churchs altar is a purple-robed Jesus kneeling in the Garden of Gethsemane an image very similar to the German historical artist Johann Heinrich Hofmanns piece of the same name. It was one of the first windows installed in the church in 1908.

And in the churchs entryway to the right the Christ the King window shows a crowned Jesus holding a lamp to symbolize the scripture I am the light of the world. That window was an impression of William Holman Hunts Oxford University piece.