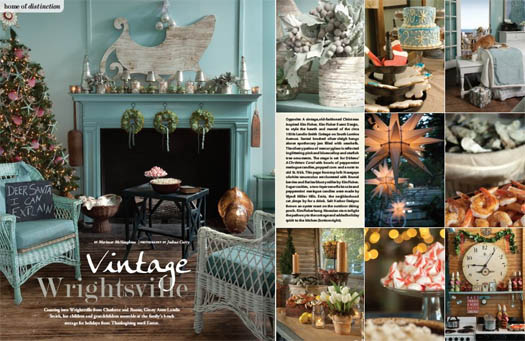 Coasting into Wrightsville from Charlotte and Boone Ginny Anne Landis Smith her children and grandchildren assemble at the familys beach cottage for holidays from Thanksgiving until Easter.

Their traditions were brewed at the Landis Hotel an oceanfront guest house that was owned and operated by Ginny Annes grandmother Carrie Maie Landis. Everybody called her “Bama.” Vintage postcards from its heyday advertise the Landis Hotels ample parking “Beauty Rests” and cuisine to the Queens taste.

When Carrie Maie sold the old guest house she disbursed the profits equally among her three children. With his share Ginny Annes father Lt. Commander Oliver Landis bought Ginny Annes mother a 1925 oceanfront beach house. It was Christmastime in 1965. He paid $25 000.

“She saw it and said to Daddy: This is the house were going to get ” Ginny Anne says.

From that day forth mealtime at the beach house has been a family ritual. Bama was known for her good cooking: succotash fresh vegetables fresh shrimp and fresh fish. And today at each holiday both stoves in the old-fashioned kitchen are cranking and the sideboard is laden with platters of traditional food: turkey and ham rice and gravy squash casserole dishes of lamb mint jelly corn pudding and green peas but all holiday meals revolve around the collards.

The leaves of the dining room table that came with the house extend from each head to seat 12 sometimes 14. No matter the occasion the table is dressed with keepsakes like the replica of a wooden dinghy filled with oyster shells left over from the last holiday. At each place is a shell placecard. Ginny Annes reads: Meme her children Frank Virginia Oliver their spouses and significant others Catherine Doug and Sue and the children Sarah and Hank even the neighbors and friends have their own oyster shell.

Everything about the house from its history to its inhabitants has a story to tell.

As the dishes are passed round the table and the servings are plated the reminiscing begins.

“One of the funniest things is that we tell the same stories over and over ” says Virginia 49 Ginny Annes daughter.

Many of those stories revolve around fetching food. Her brothers love to tease her about the five-pound flounder she once caught without even baiting a hook.

“Dad anchored in the sound ” Virginia recalls “used that little row boat. The boys were fishing intently. I wasnt even paying attention. I was listening to something the grown-ups were talking about.”

When she hooked the flounder she says “Oliver was so mad he threw his pole in the water.”

“No ” Oliver says “that was another time. Virginia went out fishing once a summer.”

“More than that not much ” she says.

“She put her line in the water and plucked out a giant flounder ” Oliver recalls.

“It was the tiniest little hook ” Virginia says.

“Dad paraded that flounder around for days until the buzzards came ” Oliver insists.

Virginia says “We ate crabs pinfish and my five-pound flounder on the screened porch. I can remember pulling crab pots. Wed have 30-40 crabs at a time blue crabs and occasionally a stone crab.”

Fishing in their grandfathers Simmons sea skiff crabbing off the dock and seining with nets 12 feet long with weights on the bottom and bobbers on top poles attached to each end one person stood on the shore and the other walked out in the water. Oliver calls it self-sustaining fun.

Now a fly fishing guide in Boone Oliver 46 says “I was the hunter/gatherer bringing the food home. If we were here 90 days I probably fished 70 of them.”

While older brother Frank built boats and sailed Oliver fished. Virginia now an educator says her favorite thing was making forts on the porch from overturned chairs and bed sheets but mostly she says she colored. Her mother still keeps those coloring books from 40 years ago in the dining room bookcase.

“It was another century!” Ginny Anne exclaims.

“My happiest childhood memories are at this house ” Frank now 53 and a fine cabinetmaker says. “We never ever crossed the bridge once we were here. We took our shoes off and they stayed off literally for three months. At the first of the summer we all got the mandatory sunburn our feet felt like leather by the end. We could walk on glass.”

Their grandmothers cook Viola peppers many of their memories.

“She was a big big part of our beach experience ” Ginny Anne says. Viola was one of three generations of women of the same family who cooked for the Landis clan.

“She was from an old black family ” Frank says. “She lived in the boonies. We would go to the sound and catch pin fish. She would fry them immediately and we would eat them immediately. She would make cornmeal fritters they were in the shape of a small pancake they were juicy inside. I think because she fried them so fast in bacon grease.”

Oliver remembers taking Viola fishing. “She was scared to death ” he says.

The entire household was on a rigorous schedule Ginny Anne says.

“We got up real early washed clothes and went out to the beach. Came in and had a hot lunch with fresh vegetables lots of fish lots of crabs and lots of shrimp. Then we took a two-hour nap.”

Virginia says they were 20 before they could skip the nap.

“I think the naps were more for the adults than for the children ” Oliver says.

“You could not even talk ” says Frank.

Ginny Anne explains “It was so you all didnt get grouchy. Grandmother couldnt stand whiny children. Wed all go to bed when the children went to bed. If we got loony and acted like adults we couldnt do anything the next day. There were never too many cocktail parties never too much drinking; it all revolved around the children.”

House builder Holmes Davis built the home in 1925 for his wife.

Then he moved down the street and built a bigger house ” Ginny Anne says. “Mother bought the house from the Johnsons. Their ancestors ran a little tea room Miss Johnsons tea room and rented rooms.”

The cottage came fully furnished with rudimentary porch tables and solid-wood mattress frames for outdoor sleeping. Indoors white wicker and bamboo rattan rockers and armchairs settees and side tables are authentic to the home.

“This house is really all about Mom ” Ginny Anne says. “This house is a memorial to Mom. The gas stove inside is rusty and burners go out all the time. One day when Mr. Garner was here he had an electric stove. When they came over here to deliver it I broke down and cried. All I thought about was all the fish and meals that had been cooked in that stove. Food was always a big thing. Were real sentimental.”

“We have on purpose never changed anything ” she says. “Anybody in the family can be in the middle of a nervous breakdown and we can come to the beach and assimilate. All my family loves it all the children and all the grandchildren this house is my passion.”

Old school chums who attended Charlottes Country Day School and later St. Marys retreat here once sometimes twice each year and other friends rent the cottage in the shoulder seasons. During the high-traffic summer months the house is managed by a rental company on the beach and many repeat renters return every season.

“When all of my generation is gone my children will not have a clue what an old beach cottage is. Ive put in gadgets I dont even know how to use and had central heat and air conditioning and cable TV put in; God knows why you need that at the beach ” Ginny Anne says.

“We had one TV with 2.5 channels ” Oliver recalls.

Frank says “TV was not even a part of it.”

“No it wasnt ” Virginia says.

Oliver agrees “Last night the four of us walked up the street and we counted the old houses left on our block. Theres only six and most of them have been sold to developers. Were going to be one of the last houses left.”

To Virginias son Hank 15 its “Just being here.”