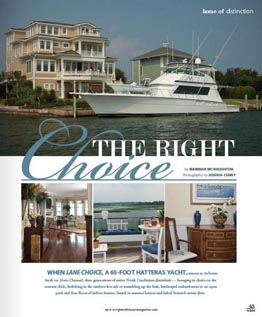 When Lane Choice a 65-foot Hatteras yacht returns to its home berth on Motts Channel three generations of native North Carolinians disembark lounging in chairs on the concrete dock frolicking in the outdoor hot tub or scrambling up the lush landscaped embankment to an open patio and four floors of indoor heaven basted in summer breezes and baked beneath sunny skies.

It is a new beach house for the family erected on familiar turf: A homesite that they have occupied since the early 1970s. As their children grew to adulthood married and had children of their own the parent couple questioned whether they should remodel their dated beach house or tear it down.

With a need for five separate bedrooms with adjoining private baths a spacious open kitchen for hosting large gatherings of family and friends and a living room generous enough to accommodate everyone the family chose to start anew.

Architect Blair Goodrich said the new house bordered by a natural body of water and a manmade lagoon was designed to fit within the 2 354-square-foot footprint of the original. Squeezing a 4 000 square foot home almost 4 600 square feet including decks and overhangs into such a smaller footprint was a first for the architect whose houses have been built on Wrightsville Beach Figure 8 Island and in other coastal communities in southeastern North Carolina. “It was a great challenge and I really enjoyed it ” he says.

Goodrich was presented a second challenge: creating a house with two fronts one waterfrontseen by passing boaters idling by in the no wake zone. Those boaters must envy the meticulously groomed terraced lawn filled with tropical palm trees and native flowering plants a patio tucked beneath the shade of a bowed deck balanced by an open porch and balcony soaring above it on the upper floors. The views swing 180 degrees sweeping from east to west.

“At the same time ” Goodrich says “you want to be able to drive up and go Wow I love my house.”

The new house at Seapath Estates is definitely a focal point of the small enclave of homes adjacent to Seapath Tower Yacht Club and Marina.

“You hope that it defines the rest of the neighborhood ” Goodrich says. “It wasnt something I was aiming to do but Im glad it came out that way.”

The architect and the homeowners collaborated on the homes exterior appearance.

“They wanted a beach house but at the same time you dont want it to look like every other beach house. Theres beach house vernacular that we followed like exposed rafter tails the arbors over the windows but I wanted to soften it with something else ” Goodrich says.

By adding a stacked stone base Goodrich added a layer of fiction implying a sense of longevity as if it had been there for a long time while tricking the eye to minimize the height of the house.

Goodrich who stacked four floors under one 40-foot roof says he doesnt like square boxy houses.

“If it gets too boxy it drives me up a wall.”

By placing the stair tower on the street side and adding multi-level windows at landing points Goodrich stepped the elevation along the north east axis to mass the bulk of the house.

“Basically youre talking about stepping back. Youre giving it a depth ” Goodrich says. “Even though its a tall and narrow house it gives it a play on shadows. Any time you can get a new shadow line it gives it depth it gives it play. The hardest part of that is keeping it in scale and proportion.”

As Goodrich designed the home Dawn Moffitt joined the team to work with the homeowners to finish and furnish the interior.

Moffat an interior designer of custom yachts had met the owners while refurbishing their boat.

They were looking for a classic Southern home on the water instead of a beach cottage look and Seapath Estates will eventually be their retirement home. For this reason the interior floorplan was designed around the furnishings plan that included some traditional pieces like a glazed Chippendale dining room table and chairs and a coffee table from the owners permanent residence in Jacksonville North Carolina.

“All of the interior fabric is waterproof Sunbrella outdoor textiles and can be wiped down with water ” Moffitt says.

Sheer drapery panels may be raised or lowered to reveal or screen the wall of windows looking over the channel and the marsh beyond. The furniture is arranged on formal Karastan carpets and less formal sisal hook rugs over Cumaru floor planks that were installed on a diagonal axis from the landing toward the open deck. The diagonal flooring reiterates a wall in the first level floorplan that separates the open kitchen and great room from a home office and study.

“The angled wall was to draw the person toward the living area ” Goodrich says “to open it up and make a small area look bigger. It started to flow real nicely.”

Coffered ceilings are a design element that Moffitt has applied to her larger yacht schemes one that she borrowed for this waterfront home for an area where the man of the house retreats behind closed doors a buffer against the boisterous gathering of children and grandchildren who huddle around the open-faced kitchen.

The granite kitchen counter is the communal place where everyone congregates around the family matriarch while meals are prepared. Moffitt worked with Goodrich and kitchen designer Richard Williams to strike the right chord hiding many of the appliances behind custom-made doors and built-in lockers.

“The kitchen was her masterpiece. She really wanted to make it function for her ” Moffitt says of the homeowner.

With flashes of color arranged in upper-level display cabinets and soft underlighting above the counters the kitchen shines like a jewel at night. It is the centerpiece of the great room. The interior palate is a study in warm wood tones with hints of blue green teal crystal gold and silver. The interior rooms appear like an extended reflection of the surrounding natural environment.

On the upper floors bedroom suites are reserved one for grandsons another for granddaughters a guest room the master and the top floor claimed by VIPs.

“Its not really really fancy but we love it ” says the lady of the house.

Her husband adds “When you wake up here its happy.”