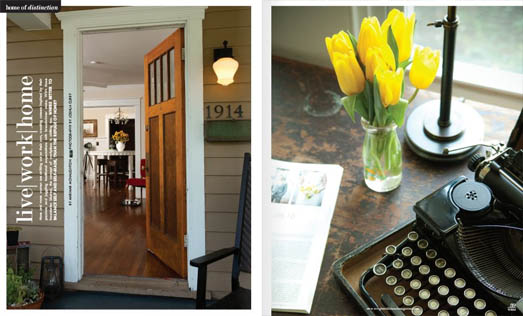 More and more women are striking out on their own creating careers inspired by their passions and juggling traditional expectations with breadwinner status. With those
boundaries blurred the concept of workplace is shifting too. Where better to
balance self and self-made than the refuge of home?

Millie Holloman and Susan Covington have recreated the Murphy bed the portable walled fold-away bed invented in 1916 that later became the object of many a comedians slapstick skit.

No joke Millie Holloman a busy portrait wedding and fine art photographer tucks herself into her Murphy bed at night. Each morning after her feet hit the floor she secures the mattress on a palette-style contraption behind a custom-crafted cabinet. On the exterior doors coated with layers of blackboard paint she chalks up a to-do list for her crew.

With so much ample floor space Hollomans bedroom doubles as a packing room where finished and framed portraits are crated boxed and labeled for pick up and delivery.

The room is sparsely furnished for this reason just a distressed wooden cabinet custom designed by Covington and fabricated in her Wrightsville Avenue warehouse shop around the corner from Hollomans circa 1911 Nun Street bungalow a live/work/home studio. Both women are creative artists and entrepreneurs operating their businesses in the Carolina Place historic overlay district.

Holloman cultivated her passion into a profession by starting small. She grew her business before buying the bungalow in August 2009.

Not wanting to rent a space and have a lot of overhead that business model has served her well. I didnt want to make my business decisions based on fear. I wanted to make them based on what I really wanted she says.

She began in the bedroom of her parents home dating back to her high school years shooting portraits of family friends and then it just snowballed as friends of those friends started to request her. When one asked her to shoot her wedding Holloman said no. And then she told me she was going to do it with disposable cameras. That takes all the pressure off. People saw those images and started asking me to do more. Then I started to enjoy it and I started to educate myself more she says.

Even though she was a one-woman show Hollomans business evolved and it became apparent that she needed to formalize her operation. It was just me and I got really overloaded with all the work. I hired a studio manager and then hired an image editor and then associates and a bookkeeper and then a full time image editor to keep up with the work that the associates were doing she says.

Her business mushroomed to the point that she eventually moved it out of her bedroom and into her parents FROG (finished room over the garage) and when it grew some more her enterprise spilled into the guest bedroom. She started feeling the pinch of having her employees reporting to her parents home every day. Thats when I decided I was going to move so we could have our own space she says.

Each weekday as her neighbors gather in the shade of their porches marking the passage of time in rocking chairs her employees trickle up the sidewalk and through the front door. The workday is sandwiched between the hours of 9 a.m. to 6 p.m. I definitely try to confine it because its out of my house Holloman says.

The bungalows two front rooms a living room and a den are home to her editing suite a command central for Millie Holloman Photography. Each workday the private areas open to the public swarming with staff members apprentices interns and clients.

The hub of the home studio is the central dining room and its centerpiece a chandelier under which Covington designed and built an elevated round table surrounded by woven wicker stools where Holloman conducts stand-up staff meetings or after hours entertains dinner guests. Around the periphery her photographic portraits framed in pressed tin lean against the picture rail above a built-in glazed cabinet that appears as though it came with the house another of Covingtons custom creations.

The dining room opens into a renovated kitchen equipped with a two-stage floating island. The counters are covered in zebra wood butcher block. A collection of vintage tableware and cookbooks are stowed behind glazed cupboard doors. On the opposite wall a pantry has been repurposed as a laundry room. Nearby one of Covingtons signature refrigerator doors doubles as a period piece and a magnetized memo board.

The kitchen area expands into an attached porch where the bookkeeper keeps a small desk. A day bed on the opposite wall camouflaged with quilts and colorful throw pillows masks a trundle bed that Holloman opens up when her out-of-town shooters roll in from Raleigh for a big assignment.

Placed throughout the home studio are Hollomans assemblages: personal collections of cameras displayed across the surface of the living room mantel decoupage dressmakers dummies her grandmothers upholstered slipper chair.

The decorative pieces are not haphazard each has a story to tell each purposely placed each resonating with Millie Hollomans very personal aesthetic the one that influences a photographic style that is felt as much as seen.

I like to shoot from a relationship perspective Holloman says capturing moments and memories as opposed to super-posed portraiture. I do documentary projects for my personal inspiration.

One of the earliest of her documentary photo essays is the story of a boy and his young mother a local photographer diagnosed with aplastic anemia.

She wrote me and said that if something ever happened to her she didnt want him to grow up without knowing his mom. Being a photographer she recognized the importance of having images of them. She wanted me to document the process her going through this so that if she didnt make it her son would have something to remember her by.
The poignant black and white photographs document the mother and sons days together in the medical center waiting room where the mother waited daily for her blood transfusions. When she recovered Holloman went out with the entire family and took their photos in the park.

I did that pro bono because it was inspiring to me. Shes in remission. If she relapses shell have to go through a bone marrow transplant and I would go through that with her again Holloman says.

Her second documentary explores the kinship between a grandfather and a granddaughter.

I always appreciated the relationship that granddaughters have with their grandfathers because my grandfathers died when I was young.

One little girl who loved horses was met by her grandfather at the bus stop every day. Holloman followed them to the stables where they rode together every afternoon. Her photos show the pair riding horses the grandfather teaching his granddaughter watching her and the two of them sitting in the stables together.

Seen through Hollomans eyes its hard to tell where the work stops and the living begins. Walking through her home its difficult to discern what is authentic and what she has added to this interior landscape.

Hollomans creativity spills over into the out-of-doors where there are more vignettes a flat rock terrace out back; a Coca Cola box planter on the front bungalow stoop. Her Wilmington-based business also ripples across the state and once a year into a major metropolitan area in an annual workshop she calls Love Affair.

Held in a different city each year Love Affair took Holloman to Dallas last month where she and her colleagues lead the week-long conference. The experience is something she blogs about on her website.

Its all about helping other women to balance their life. The whole premise of the workshop is that women have all these things we have to do like have families all these responsibilities like have kids and have husbands how do we do what we love and not cheat in one area of our life and be able to do everything?