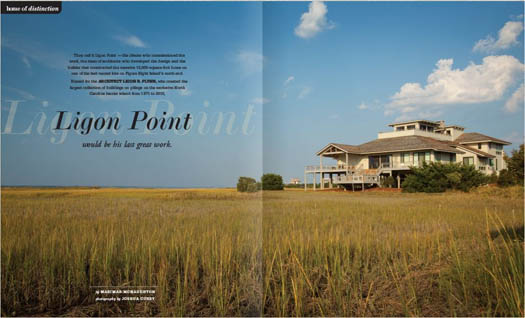 They call it Ligon Point the clients who commissioned the work the team of architects who developed the design and the builder that constructed the massive 12 000-square-foot home on one of the last vacant lots on Figure Eight Islands north end.

Named for the architect Ligon B. Flynn who created the largest collection of buildings on pilings on the exclusive North Carolina barrier island from 1971 to 2010 Ligon Point would be his last great work.

igon Flynn passed away in September 2010 but not before he toured this final triumph. He shared a few last words about the house: “The single most precious thing to have is a breeze. Its free. I wanted there to always be a breeze.”

The breezes traveling from ocean to land and across waterway and marsh do in fact meet up at Ligon Point. Designing for the sites earthly pleasures was Ligons signature specialty. His spirit is infused in the structure.

“Ligons houses are organic so they revolve around whatever the central idea is ” says Ginny Woodruff who joined Ligon B. Flynn Architects (LBFA) 30 years ago. “They are never objects. So you dont drive up and say: Gosh thats a gorgeous looking house. You have to go in them and understand why it is the way it is.”

Ligon summed up his vision numerous times but always returned to one organic premise: “All of my buildings have to have habitable spaces outside that are connected to the interior. I want to be able to see into it and through it.”

he site at Ligon Point is narrow at its landside egress at the end of a paved cul de sac and then fans out to skirt the edges of the marsh. On its northwestern most tip a tiny spit of sand forms the point.

On this pristine piece of property flanked by two other houses he designed years earlier Ligon conceptualized his last beach house design for three siblings from Wilmington Greensboro and California.

The clients asked for a green house Woodruff says but Ligon wanted to do a conceptual green house not a technically green house.

“It was about the whole notion of green ” she explains. “Ligon took what he wanted about a green house to heart. Ligon wanted to do something that did that in a way that nobody else had done it.”

Ligon had been designing green houses ever since he graduated from the North Carolina State University School of Design in 1959. He and Henry Johnston started a practice in Raleigh in 1971 relocated to Wilmington in 1972 and then in 1976 went their separate ways. Both continued to design modern beach homes on Figure Eight Island.

Ligons designs were unwavering rooted to his single harmonic tenet: No building is complete for human habitation without a garden.

But aside from the grassy buffer provided by the marsh there was no garden to build around at Ligon Point. Landscape designer David Erwin of North State Gardens has planted several live oak trees to soften the entrance and reintroduced other native plants to tolerate the climate.

When it matures this landscape will be appreciated from the ground-level area beneath the house which functions as a breezeway and a courtyard composed of poured concrete and white stone gravel. Places for a table for outdoor dining balance beams where children might play (that double as benches) a shuffleboard court and outdoor showers are all tucked among sturdy glue-lam pilings that disappear eight feet into the ground and rise more than 40 feet toward the rooftop. The beams are the bones of the house.

Rather than a design that might be measured by an energy efficient rating system to determine its greenness Ligon envisioned a central unconditioned area with no heat or air around which outdoor porches and balconies were placed and then living cooking eating sleeping and bathing chambers were arranged.

Doors and windows that define these private and public spaces are so transparent through glass panes or screens or so permeable through portholes porches and decks that they frame interior vistas and allow the flow of air and the passage of daylight around the exterior to perforate the living space.

The central element became a 44-foot atrium that rises from the grade level to a rooftop deck sited for 360 degree views of the island. The deck surrounds an architectural chimney. Like most chimneys its shaped like a box but unlike other chimneys the walls of this box are sliding doors with glass outside and screens inside that when opened permit warm air corralled inside the atrium to rise back into the atmosphere.

Jim Farlow who has built more than 20 of Ligons homes many on Figure Eight Island said this was his most avant garde design. Woodruff calls it experimental.

At the LBFA studio on 15 South Second Street the day after Ligon passed away Woodruff met up with Carl Lorenz one of the last of a legion of young architects and interns to join the firm and work for two years on the design of Ligon Point.

Lorenz and Bill Sellars Farlow Groups construction manager practically lived at Ligon Point during the 21 months it took to build it.

Lorenz recalls the process. “He told me: Youre the project manager. I know that just means he wanted me to take the responsibility for things. I was never convinced at all that I was going to be designing the house. He would never let that go in a real way but I would be enabling the house to be under construction and drawing on people around him like Ginny and Howard and other interns to put the project into motion. Thats the classic title of project architect and he wanted to tell me to do that ” Lorenz says opening the thick brown folder that contains piles of drawings including floorplans elevations details and schedules. Sandwiched between the full sheets are wafer thin layers of yellow tissue paper lined with dull lead gray lines.

“This is literally what we would get from him ” Lorenz says pulling out what the industry calls a “trash sketch.”

The sketch shows a line of rectangular boxes with arrows from all directions pointing toward the edge of the paper. On it Ligon seemed to have worked out the views. “Ligons mastery is maximizing the site maximizing the views ” Farlow says.

Lorenz produced the renderings that would later be presented to the client.

“They were blown away by the concept. We had a discussion about who got what bedroom ” Woodruff says. There was some tweaking of the plan but the concept was accepted immediately.”

As the pilings were being set in February 2009 Ligon suffered a stroke from which he would never fully recover. Woodruff who worked on the initial design but left to pursue her own projects came back to LBFA to develop the plan making it livable.

“The interior floorplan is developed and then you dress it ” says Woodruff about how the exterior evolves through the process.

All of Ligons former principals and longtime collaborators from Howard Garriss who designed the structural elements of the building to Linda Tuttle who designed the systems for keeping the water out of it to Jane Ellison who furnished it to the Farlow and Erwin teams who worked side-by-side for decades completing Ligons work agree that Ligon Point became a labor of love for everyone.

Ellison lives in one of Ligons houses just one lot south of Ligon Point and after the initial design was approved the clients who happen to be her children turned the project over to their mother.

“Shes an interior designer and she has a good sense of things ” Woodruff says. “If we wanted to run something by somebody it was Jane. She influenced all of the cabinetry and that ceruse finish in the kitchen and living room area.”

As Ellison who commutes from Greensboro to Figure Eight specified the furnishings she tried out a variety of looks that her children either bought or exchanged. The result is a fabulously decorated second home that supports large gatherings of family and friends.

Though it was occupied during the summer months Ligon Point was finally completed in October when Erwins men installed a fountain at the base of the atriums staircase. As the outdoor temperatures drop into winter the fire will be lit. Seen the length of the atrium from one of two seating areas or from the formal dining room behind glass doors the warmth of the fire will burn until spring. This season the suns rays will dip a little lower in their arc across the winter sky and along with the gentle breezes that drift indoors and the music of trickling water the sound of a gentle spirit passing by Ligon Point will ring throughout.