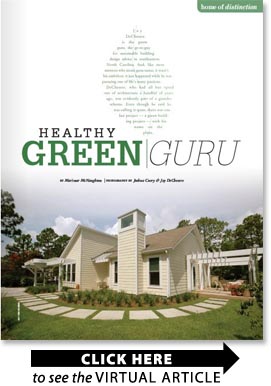 Jay DeChesere is the green guru the go-to-guy for sustainable building design advice in southeastern North Carolina. And like most mentors who attain guru status it wasnt his ambition; it just happened while he was pursuing one of lifes many passions.

DeChesere who had all but opted out of architecture a handful of years ago was evidently part of a grander scheme. Even though he said he was calling it quits there was one last project a green building project with his name on the plans.

ve always been very interested in very functional economical design things that are practical. Ive always loved sailing which requires no energy except the wind capturing that and seeing what makes the boat move the fact that you can live in a very tiny environment collecting rainwater. You can move and live and sustain yourself in a very small floating capsule. Heather and I backpack and camp and survive on very little. All these things are just built into me ” DeChesere says from the couples living room at Talon Court where bamboo floors and walls tinted a pale aquamarine create an island illusion. The cascade of sunshine beaming from a skylight the subtle movement of a school of shimmering silver fish sculpted by Michael Van Hout and the gallery of watercolor renderings depicting tropical settings are a fitting backdrop for DeChesere who sailed into Wilmington in the 1960s to make his mark on the coastal landscape.

After a 40-year career as an architect he says “I thought I was done.” The pressure of finding new projects to support a dedicated team of architects had pushed him to the brink. “I didnt know what I was going to do. Heather and I both enjoy sailing and hiking traveling and learning other languages artwork and painting and I thought No problem were just going to go and do some stuff.”

DeChesere and his wife Heather reached this decision together on a voyage around the Chesapeake Bay then sold Synthesis the architecture firm hed built to Cline Design a reputable Raleigh-based company that wanted a foothold in the southeast part of the state. Jay later sold Synthesis affiliate Telesis a contracting company to his business partner Tim Gaylord. Then the DeCheseres took a three-month hike on the Appalachian Trail.

Looking back in photo albums that illustrate his career from an early start in his home state Kentucky to the genesis of his own firm started in a garage on Harbor Island in Wrightsville Beach DeCheseres contributions to the built environment list read like landmarks from the decades. In the 60s it was stately Bear Hall the University of North Carolina Wilmingtons Marine Science and Oceanology building; in the 70s it was The Landing on Wrightsvilles Causeway Drive a North Carolina American Institute of Architects mixed-use retail-office winner; in the 80s it was the Bald Head Island Administration center. A crop of medical buildings and private homes located on Bald Head Figure Eight and Harbor islands followed in the 90s.

That was the decade Jay and Heather bought an island of their own between Eleuthera and Harbour Island in the Bahamas. On Middle Cay less than two acres the DeCheseres spent years resurrecting a storm ravaged stucco shell.

“It was a big house 2 700 square feet ” DeChesere says. “I was sketching stuff on a napkin trying to figure out what to do with it. It had been deserted for years completely termite eaten. There were rats and all kinds of wildlife in it. Heather and I went down and started working on it. We camped in the house and started tearing stuff out and knocking walls down and ripping things out.”

Toatlly disconnected from the mainland they created a self-sufficient vacation home powered by a 12-volt electrical system charged by photovoltaic panels and a wind generator with rain-water harvesting natural ventilation and day-lighting. Adding boat slips and a pool they turned the house into a destination rental.

In 2000 the ribbon was cut on three more significant designs. One was the city of Wilmingtons Market Street fire station. For that DeChesere borrowed elements of the countys historic structures notably the bell tower from the Third Street courthouse. And two more landmarks the Core Sound Waterfowl Museum and Heritage Center on Harkers Island and the Graveyard of the Atlantic Museum on Hatteras Island were also innovative designs created during this decade.

“A lot of our work focused on the coast all of these unique kinds of projects that you dont find other people doing. The projects we did were more diverse and still focused on design and became the projects that were battered by the wind and waves of the ocean so we became experts in that ” DeChesere says.

But in actuality there would be two final projects opening up two separate pathways that would converge at one point immutably altering the trajectory of DeCheseres career and in the process his retirement plans.

While he waited on the study center DeChesere was faced with the prospect of relocating his aging parents now in their late 90s into an independent living facility. He pondered what to do with their three-bedroom two-bath 1 200-square-foot 1980s tract home buried at the end of a cul-de-sac in a suburban Wilmington neighborhood sandwiched between South College and Masonboro Loop roads.

As it was the house likely would have sat on the market in a languishing real estate economy. He considered a renovation and assembled a core green team composed of diagnostic design and construction professionals and hired dozens of subcontractors most of whom are members of the Cape Fear Green Business Alliance to help. DeChesere says hiring a green design team is like hiring a doctor.

“Id rather pay a doctor to keep me healthy than pay for the repercussions of not being healthy ” DeChesere says.

In late summer 2009 Christopher harvested building and finish materials wood trim carpet padding and tile for reuse. Kitchen cabinets counters sinks appliances light fixtures doors blinds and more were donated to Cape Fear Habitat for Humanitys home store and the interior drywall along with any unusable wood scraps was mulched. Plumbing fixtures were replaced with low-flow units. The old heat pump was removed and a geo-thermal system was installed. In addition to overseeing all of the construction Christopher also fabricated cement countertops and exquisite Strata Board doors made from reclaimed wood materials.

After the drywall was removed Dunning eliminated the plastic moisture barrier an archaic routine building practice found to actually encourage mold and mildew formation. He also tested the entire structure for its energy efficiency insulated the attic up to the rafters with a radiant barrier and installed a solar hot water heater on the roof. With the addition of a 12-panel solar array positioned on a southeast/northwest axis behind the house Dunning predicted the home might exceed a net-zero energy cost and possibly come out $30 a month in the green.

Berkley relocated holly trees from the front of the house where they blocked valuable daylight to the backyard to provide wildlife habitat. She minimized the sites existing dependency on a lawn through the introduction of native plants in concert with the neighboring long leaf pine turkey oak and wire grass ecology. One greenspace was reserved for a vegetable and herb garden. Several rain gardens or bio retention areas were established to capture rainfall that would be reused for toilet flushing and for irrigating the landscape. A 450-square-foot roof garden was designed by Steve Mott to manage stormwater runoff.

France allowed the exterior colors and textures to influence the interior palette and selected finish material manufactured within a 500-mile radius of the project. Some of her choices like the pressed sorghum straw wall panels and the sunflower hull resin composite represent emerging sustainable technologies.

DeChesere softened the exterior appearance of the home by the addition of a carport. The existing concrete driveway was scored and cut into squares and used to create pavers around the periphery of the house. The driveway was replaced with a pervious surface and exterior vinyl siding was harvested and replaced with Hardie Shingleside panels.

One of the most significant changes made to the floorplan was the repurposing of the garage as habitable space. This area is now an office shared by the DeCheseres linked to the living area through the foyer. A living room fireplace was removed and replaced with a light well and built-in entertainment center and access to bed and bath chambers was redirected to provide more privacy.

Completed in six months DeChesere came to a fork in his pathway. The house was so nice that rather than market the property for resale he and Heather decided to move in.

Today the Barrier Island Study Center is moving forward but the name that is synonymous with nationwide green rehab initiatives and the project that currently ranks as the countrys top LEED performer earning an unprecedented 113.5 platinum points during its 2010 certification by the US Green Building Council and a solid gold designation from the NC Solar Centers Healthy Built Homes program is Talon Court.

Green Rater Mark Jabaley
Above and Beyond Energy