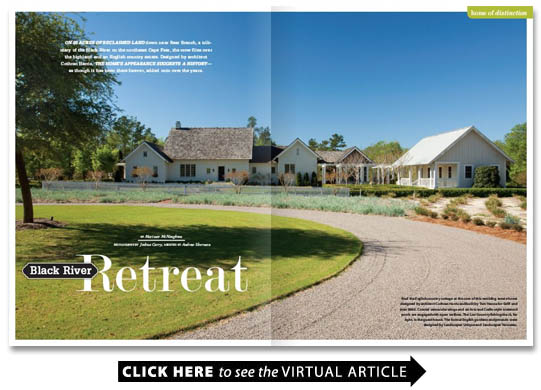 On 60 acres of reclaimed land down near Bear Branch a tributary of the Black River on the northeast Cape Fear the crow flies over the highland and an English country estate. Designed by architect Cothran Harris the homes appearance suggests a historyas though it has been there forever added onto over the years.

the fiction of the housebeginning with the central structureblends the owners aesthetic wish for an English country house with Harriss signature Arts and Crafts idiom fleshed out in side wings and a pitched roofline that follows the elevation of the floorplan adding yet another layer of detail to the sprawling structure embellished with graceful curved arches and trellised walkways porticos and a white picket fence.

Across the heather is a Victorian folly (this one a tiny rotunda) often found on old English estates. Follies serve no real purpose save framing the view of the estates parklands and maybe offer a shady respite from the glaring sun if one was inclined to walk ones grounds. Homeowner Joan Weld laughs saying the follylike some of the other weathered elements found outside and within her home adds character.

“I kind of liked the concept of a little English cottage or a farmhouse in the United States that you added to as you had the money or maybe you added to it as the family was growing Joan says. “I wanted this house to merge with the land. I wanted it to be low and horizontal because the land is important.”

Standing in the breezeway between the screened porch and a side entrance surrounded by groomed lawns sculpted English boxwood gardens and open meadowlands Joan says “I like expanse.”

She and her husband Griff Weld tamed the former dump planted every plug of grass every tree root and planned this house together with their architect. It is the second house that Cothran Harris has designed for the Welds. The first was located on Bald Head Island. Wrightsville Beach builder Tom Hanna constructed both.

Harris was challenged to create an elevation that did not resemble a standard ranch-style home and Hanna Joan says was extremely patient with her requests asking brick masons and carpenters to humor her desire to evoke the look and feel of an old home.

“I wanted a thatched roof for gosh sakes ” she says.

The interior palette is a soothing white-on-white layered with heirlooms antiques and artifacts white-washed wood and wicker and slipcovered upholstery placed over bare cobbled brick and hardwood floors. Family portraits hang beside photographs of exotic destinations amid an impossibly large collection of shells hand plucked off of beaches from the North Carolina coastline to the continent of Africa and Patagonia South America.

The open kitchen dining area and sunroom is a complete environment. Exposed to views of the south lawn the area is drenched in sunlight. Along the north wall small chambers for laundry the pantry and Joans home office are tucked between relics and cabinets that were fabricated or refinished by Susan Covington of SAC Art Designs. A custom chandelier created by Louise Gaskill hangs above the distressed plank table.

But the kitchen was Griffs invention. As the family chef this was one area he claims. The layout he says is simple but was upscaled to allow for two to cook and clean together. The basic triangle features a central butcher block-style island a repository for storage shelves and refrigerated drawers cleverly disguised behind cabinetry inspired by German SieMatic Bauhaus minimalist designs.

There is an extra sink for washing and prepping food and another for washing dishes. Pots hang from a repurposed fence gate. A pot-filler is mounted beside the commercial gas range. Joans collection of white Depression-ware decorative and serving pieces fills cabinets and lines the counter top in front of polished subway tile.

Two plush sofas and upholstered arm chairs float in a cheery living room flanked by windows and built-in window seats. The hearth is surrounded by volumes of book-lined shelves. This room which adjoins the master suite and bath is where Griff spends the most time reading.

“This house is all Joan ” Griff says. But Joan says she doesnt spend much time at home. “Im always on the run ” she admits. “You just gotta keep moving.”

Strolling the grounds it is easy to see some of the architectural choices that echo the 360- degree sweep of the land that slopes in all directions. Past the barn are two creeks. One is a runoff that feeds into the second creek Bear Branch where the couple embarks in kayaks to paddle to the Black River a tributary of the Cape Fear River.

“We get to Bear Branch past the barn a little ways and theres a slope down ” Griff explains and describes an area where they built a dock and keep their kayaks. “It takes us about 10 minutes to get to the Black River. Really the best part is getting to the riveryou get in the river and you get boats speeding bybut when youre in our little creek youre right in nature. The birds are there; the frogs are jumping in. Its kind of natural and nice. Its an easy paddle.”

The diverse landscape hosts bear which reappear in the spring. “Every winter there are four or five bird feeders and I take them all down except for one and each spring the bear comes and completely bends it down and eats all the sunflower seeds ” Griff says.

“We have lots of fox squirrels … with very unusual markings the largest nonflying squirrel east of the Mississippi. Theyre huge. Theyre indigenous to long leaf pine they eat the nuts of the pinecone. Its the only place you find them. Theyre all through the sand hills. Here we have a lot of them and we watch the wild turkeys walk by. All year long: the turkeys and the fox squirrels ” he adds.

The Welds Joan from Ohio and Griff from Minnesota discovered the sanctuary of the North Carolina coastline on Ocracoke Island. “I fell in love with the Outer Banks ” Joan says. Having visited the island with her family and camped out there she adds “Its always been a healing place for our family.” She and Griff were married in a litte Ocracoke chapel by Reverend Creech.

A former staffer for Ohio Senator John Glenn Joan says they eventually resided in historic downtown Wilmington to be closer to Bald Head where they bought land in the 1980s. Griff who was hired to take over sales for Woodbury Insurance believes its important to be an integral part of the community. He was drafted to a variety of nonprofit boardsthe Coastal Land Trust the local North Carolina Symphony WHQR Public Radio the YMCA and Cape Fear Community College. He was also the creator of QENO Quality Enhancement for Nonprofit Organizations at the University of North Carolina Wilmington.

Meanwhile Joan commuted to Raleigh first as Assistant Secretary for Natural Resources in the Department of Environment Health and Natural Resources later as Governor Jim Hunts chief of staff during his second administration.

A member of the board of the North Carolina Coastal Studies Institute on Roanoke Island in Manteo and an active member of the Coastal Resources Commission she says that organizationwhich meets in different locales around the statetakes up a lot of time.

Enchanted by the sand roads and the natural environment they considered a retirement to Bald Head Island and built a cottage there decades ago. As the island developed the magic slowly faded and the worldly couple fled for the high country and moved into their Black River retreat days following 9/11. Now family and friends make the journey to this remote rural retreat about 20 minutes from downtown Wilmington 30 from Wrightsville Beach.