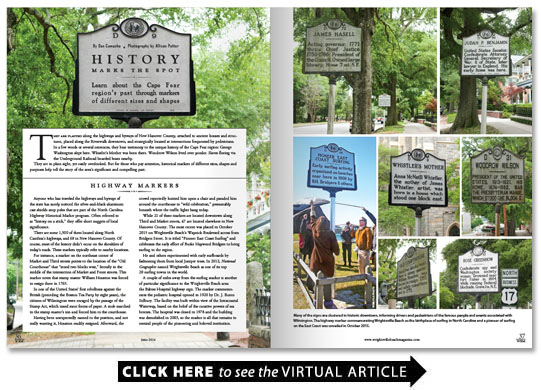 They are planted along the highways and byways of New Hanover County attached to ancient houses and structures placed along the Riverwalk downtown and strategically located at intersections frequented by pedestrians.

In a few words or several sentences they bear testimony to the unique history of the Cape Fear region: George Washington slept here. Whistler’s Mother was born there. Woodrow Wilson lived over yonder. Slaves fleeing via the Underground Railroad boarded boats nearby.

They are in plain sight yet easily overlooked. But for those who pay attention historical markers of different sizes shapes and purposes help tell the story of the area’s significant and compelling past.

Anyone who has traveled the highways and byways of the state has surely noticed the silver-and-black aluminum cast shields atop poles that are part of the North Carolina Highway Historical Marker program. Often referred to as “history on a stick ” they offer short nuggets of local significance.

There are some 1 500 of them located along North Carolina’s highways and 68 in New Hanover County. Of course most of the history didn’t occur on the shoulders of today’s roads. These markers typically refer to nearby locations.

For instance a marker on the northeast corner of Market and Third streets points to the location of the “Old Courthouse” that “stood two blocks west ” literally in the middle of the intersection of Market and Front streets. This marker notes that stamp master William Houston was forced to resign there in 1765.

In one of the United States’ first rebellions against the British (preceding the Boston Tea Party by eight years) the citizens of Wilmington were enraged by the passage of the Stamp Act which taxed most forms of paper. A mob marched to the stamp master’s inn and forced him to the courthouse.

Having been unexpectedly named to the position and not really wanting it Houston readily resigned. Afterward the crowd reportedly hoisted him upon a chair and paraded him around the courthouse in “wild celebration ” presumably beneath where the traffic lights hang today.

While 21 of these markers are located downtown along Third and Market streets 47 are located elsewhere in New Hanover County. The most recent was placed in October 2015 on Wrightsville Beach’s Waynick Boulevard across from Bridgers Street. It is titled “Pioneer East Coast Surfing” and celebrates the early effort of Burke Haywood Bridgers to bring surfing to the region.

He and others experimented with early surfboards by fashioning them from local Juniper trees. In 2012 National Geographic named Wrightsville Beach as one of its top 20 surfing towns in the world.

A couple of miles away from the surfing marker is another of particular significance to the Wrightsville Beach area: the Babies Hospital highway sign. The marker commemorates the pediatric hospital opened in 1920 by Dr. J. Buren Sidbury. The facility was built within view of the Intracoastal Waterway based on the belief of the curative powers of sea breezes. The hospital was closed in 1978 and the building was demolished in 2003 so the marker is all that remains to remind people of the pioneering and beloved institution.

The Historic Wilmington Foundation is responsible for the plaques on many buildings and structures throughout the area. There are nearly 600 and anyone walking through Wilmington’s historic district can’t miss them. Their descriptions are typically 40-70 words and celebrate structures of national state or local importance often revealing the lives of typical citizens.

A building must be more than 75 years old and located in New Hanover County to be eligible for a Historic Wilmington Foundation plaque. Buildings over 50 years old at Wrightsville Beach Carolina Beach and Kure Beach are also eligible.

Buildings over 100 years old receive a black plaque. Those 75 to 50 years receive a reddish plaque. Several historic alleys have received a special green plaque. A few years ago the foundation began recognizing beach buildings with plaques the color of sea oats.

One of the foundation’s black plaques adorns the side of the Mitchell-Anderson House informing passersby that the Georgian-style house was built for Edward Mitchell circa 1744 and is the oldest surviving structure in Wilmington.

The town’s Historic Landmark Commission also issues its own plaques for buildings that are associated with events that contribute significantly to the history of the area are associated with the life of a significant historical figure represent the work of a master craftsman or possess high artistic values or have yielded or are likely to yield important historical information. The designation helps preserve the past; once a property is designated as a historic landmark the owner cannot demolish the property move it or substantially change the exterior features without the approval of the commission.

At Carolina Beach visitors to Havana’s Restaurant can walk up on the front porch and read the history of the building which is celebrating its 100th anniversary this summer. The cottage was built in 1916 by Joseph Loughlin and his wife Eleanor King. Joseph was the secretary-treasurer and general manager of the New Hanover Transit Company one of the companies that first developed Carolina Beach. Sadly Joseph was killed just a few years later in action in France during World War I.

Wilmington is called the Port City for a reason and like most river cities much of its history can be told by the water. The city has placed 11 historical markers along its recently expanded Riverwalk. These histories a bit longer at around 200 words and accompanied by pictures read like chapters of a short book that can be read during an hour-long stroll.

“African-American Watermen ” located near the foot of Orange Street describes the key role blacks played in the naval industry that was so important to the development of Wilmington. This marker is accompanied by an informational kiosk titled “Orange Street Landing on Cape Fear ” which is part of the National Parks Service’s National Underground Railroad Network to Freedom Program.

Scattered throughout the area (but mostly in downtown Wilmington) are about 20 granite markers that resemble gravestones with short histories etched like epitaphs. These markers are the work of the New Hanover Historical Commission and represent one of the earliest efforts to commemorate points of historic interest.

Founded in 1909 the commission placed many of its markers in the decade that followed. Although the organization has since faded into history itself its markers remain.

One at the foot of Market Street marks the 1765 residence of Royal Governor William Tryon who took his oath of office in Wilmington before building his opulent palace in New Bern.

There is another marker one block diagonal at the southeast corner of Front and Dock streets that commemorates George Washington’s visit to Wilmington in 1791. Shortly after his election in 1789 Washington endeavored to visit every state. The concept of the presidency was still novel and he hoped to instill a sense of unity in the recently formed country. In early 1791 he began his tour of the Southern states.

Washington arrived in Wilmington on April 24 while the city’s main inn Dorsey’s Tavern was undergoing renovations. (Its exact location is unknown but it was somewhere on Toomer’s Alley just off Front Street.) Instead Washington stayed at the home of the Quince family which was described at that time as “the most pretentious in the city.” It stood at the corner of Front and Dock streets where Dock Street Printing’s parking lot is today.

In addition to these four types of markers numerous others are scattered throughout the area. Many are single markers or monuments placed by private organizations to celebrate their own history or events important to their mission.

In total there are nearly 1 000 historical markers in the area so it’s easy to just wander and learn.