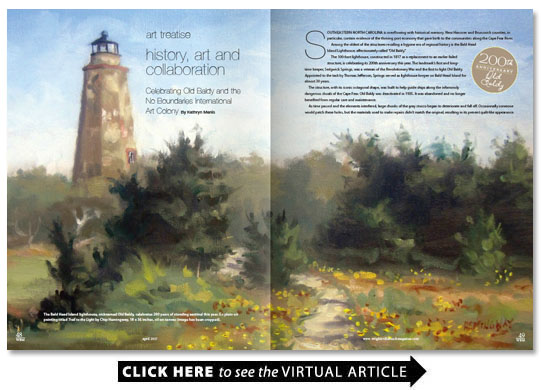 Southeastern North Carolina is overflowing with historical memory. New Hanover and Brunswick counties in particular contain evidence of the thriving port economy that gave birth to the communities along the Cape Fear River.

Among the oldest of the structures recalling a bygone era of regional history is the Bald Head Island Lighthouse affectionately called “Old Baldy.”

The 100-foot lighthouse constructed in 1817 as a replacement to an earlier failed structure is celebrating its 200th anniversary this year. The landmark’s first and long-time keeper Sedgwick Springs was a veteran of the Revolutionary War and the first to light Old Baldy. Appointed to the task by Thomas Jefferson Springs served as lighthouse keeper on Bald Head Island for almost 30 years.

The structure with its iconic octagonal shape was built to help guide ships along the infamously dangerous shoals of the Cape Fear. Old Baldy was deactivated in 1935. It was abandoned and no longer benefited from regular care and maintenance.

As time passed and the elements interfered large chunks of the gray stucco began to deteriorate and fall off. Occasionally someone would patch these holes but the materials used to make repairs didn’t match the original resulting in its present quilt-like appearance.

Over time the lighthouse has become a different kind of signal for residents and frequent visitors to Bald Head. It is a beacon of the unique experience that awaits on the barrier island at the mouth of the Cape Fear River accessible by boat or ferry and where the transportation is bikes golf carts and feet.

“When you’re riding the ferry over as you come around the tip of the channel you can see Old Baldy in front of you ” he says. “Even as a local you feel like you’re entering another world; a different time. Bald Head Island is a place where you can truly get away and relax. Seeing that lighthouse is like a catharsis reminding you of the relaxation and peace up ahead.”

Each year a panel of board members and invited curators selects artists to participate in No Boundaries International Art Colony (NBI). Artists in all mediums are welcome though mixed media and paint are the most common. Having no obligations other than creating the ritual of watching the sun rise from the porches of the island’s historic lighthouse keeper’s cottages and revisiting the struggles of the day over a gourmet meal participants at all levels create a bond.

Beth Crookham the current NBI director is a passionate and lifelong art lover with a background in the film and television industry.

“As a great lover of art and artists I am most excited about being able to provide the gift of time for inspiration and rejuvenation to artists ” she says. “I love to watch the progression of artworks as they are created. Over the course of the two weeks it is great fun to see how pieces have evolved and to encourage each artist as they take chances and push to explore free from any specific demands.”

Unsurprisingly the historical structures of Bald Head often appear in the work that is generated. One standout example is the wildly imaginative drawings of Old Baldy now in the Kent Mitchell family collection done by Argentine artist Ricardo Calanchini who attended NBI the first year.

He creates intricate pulley systems around the structure recalling an earlier period of construction and incorporates the conch shell in varied and surrealistic ways.He references the lighthouse’s fortress-like appearance through depictions of medieval castles or towers in several of these works.And yet he subverts this tower-status in one image that shows Old Baldy suspended mid-air its foundation rippling in the breeze like gauzy fabric.

Calanchini also references the international aspect of the art colony in a drawing of the top of the historic structure.This image features a U.S. flag surrounded by a multicolored cluster of additional flags similarly wrinkled by an invisible gust of wind.

The Argentine artist’s depictions of Old Baldy seem to employ the surrealist technique of free association allowing the artist to capture everything that is felt or thought consciously and subconsciously.Writer Andr� Breton author of the 1924 “Surrealist Manifesto ” described surrealism as “psychic automatism in its pure state by which one proposes to express — verbally by means of the written word or in any other manner — the actual functioning of thought.” And many of the movement’s painters writers and filmmakers regularly invoked natural elements animals and historical imagery in this process.

In Calanchini’s images the surrealist notion of the “actual functioning of thought” is apparent. When viewing the lighthouse in person many things come to mind: the structure’s history how it was constructed before the advent of contemporary technologies the people who have been there and events that have taken place what the environment looked like before the structure was built and what it and the world will look like when it is gone.Calanchini skillfully captures these fleeting impressions and associations through his whimsical yet thought-provoking style.

The result as was the case for many of surrealism’s best-known painters is a versatile and dynamic series of drawings where each image emphasizes a different aspect of the lighthouse and enables a new point of contemplation.

No Boundaries is a labor of love created by artists and friends Gayle Tustin Dick Roberts and Pam Toll in May 1998. Like Old Baldy the art colony is about to celebrate an anniversary when it turns 20 next year.

“It was truly a leap of faith in the beginning but it turned out that it was magic; everything just came together perfectly ” Roberts says.”It was a lot of positive thinking and hard work but I’m very happy with what has come out of it.”

The three multitalented artists who met in a life-drawing group in the studio of a mutual friend in the late 1980s were motivated to provide other artists with the life-changing experience they had.

“We based No Boundaries International Colonyon that model — with an idea of laying aside national boundaries in favor ofcultural exchange and peace — to dream of the possibility of a world where diverse voices are heard with empathy and tolerance ” Toll says. “There was an educational thrust to our mission too to share these voices with the local community.”

At the forefront of their mission was providing the opportunity to collaborate across life experience and culture. Coming from a variety of educational and artistic backgrounds the three founders were already well versed in the power of creating across different perspectives.

“Sharing and caring about others is so important in our world ” Tustin says. “That is a big part of why we started NBI. We wanted to share the time to work uninterrupted in our busy world with like-minded people to put down weapons and embrace each other as human beings with love compassion and creativity.”