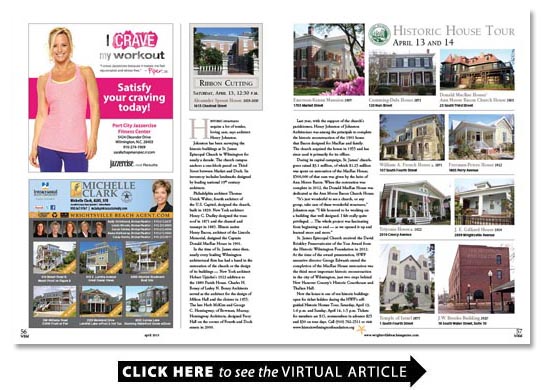 Historic structures require a lot of tender loving care says architect Henry Johnston.
Johnston has been surveying the historic buildings at St. James Episcopal Church in Wilmington for nearly a decade. The church campus anchors a one-block parcel on Third Street between Market and Dock. Its inventory includes landmarks designed by leading national 19th century architects.
Philadelphia architect Thomas Ustick Walter fourth architect of the U.S. Capitol designed the church built in 1839. New York architect Henry C. Dudley designed the truss roof in 1871 and the chancel and transept in 1885. Illinois native Henry Bacon architect of the Lincoln Memorial designed the Captain Donald MacRae House in 1901.
In the time of St. James since then nearly every leading Wilmington
architectural firm has had a hand in the restoration of the church or the design of its buildings New York architect Hobart Upjohns 1922 addition to the 1880 Parish House. Charles H. Boney of Lesley N. Boney Architects served as the architect for the design of Milton Hall and the cloister in 1955. The late Herb McKim and George C. Hemingway of Bowman Murray Hemingway Architects designed Perry Hall on the corner of Fourth and Dock streets in 2000.
Last year with the support of the churchs parishioners Henry Johnston of Johnston Architecture was among the principals to complete the historic reconstruction of the 1901 home that Bacon designed for MacRae and family.
The church acquired the house in 1955 and has since used it primarily for its offices.
During its capital campaign St. James churchgoers raised $3.1 million of which $1.25 million was spent on restoration of the MacRae House; $500 000 of that sum was given by the heirs of Ann Moore Bacon. When the restoration was complete in 2012 the Donald MacRae House was dedicated as the Ann Moore Bacon Church House.
Its just wonderful to see a church or any group take care of these wonderful structures Johnston says. I felt honored to be working on a building that well designed. I felt really quite privileged. … The whole project was fascinating from beginning to end as we opened it up and learned more and more.
St. James Episcopal Church received the David Brinkley Preservationist of the Year Award from the Historic Wilmington Foundation in 2012. At the time of the award presentation HWF executive director George Edwards stated the completion of the MacRae House restoration was the third most important historic reconstruction in the city of Wilmington just two steps behind New Hanover Countys Historic Courthouse and Thalian Hall.
Now the house is one of ten historic buildings open for ticket holders during the HWFs self-guided Historic Homes Tour Saturday April 13 1-6 p.m. and Sunday April 14 1-5 p.m. Tickets for members are $15 nonmembers in advance $25 and $30 on tour days. Call (910) 762-2511 or visit www.historicwilmingtonfoundation.org

Other Homes On Tour: